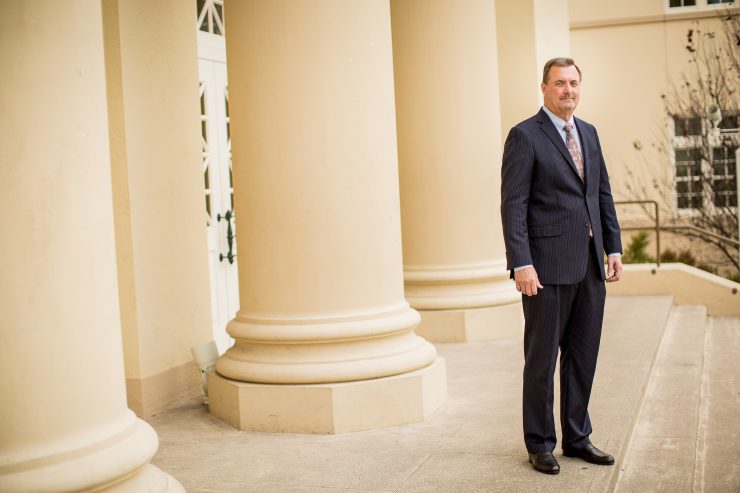 “A hallmark of our faculty is that they care about our students” says Glenn Pfeiffer, Chapman provost. In June, Pfeiffer will retire from his role and return to his faculty position as a professor of accounting.
University News

Glenn Pfeiffer to Retire as Provost in June 2021 After a five-year tenure marked by many achievements, Pfeiffer will take a yearlong sabbatical and then return to his faculty role in the Argyros School of Business and Economics.

After serving for five years, fulfilling the commitment he made to our institution when I became president, Glenn Pfeiffer has announced he will retire from his role as provost as of June 1, 2021. Glenn is an accomplished scholar, teacher and well-respected faculty member, and after a yearlong sabbatical he will return to his faculty position in the Argyros School of Business and Economics to continue his good work. On behalf of the entire Chapman community, I want to thank Glenn for his contributions over the past five years.

Glenn has been a very important partner for me as provost, and has played a great role in my successful transition into the role of president. This past semester, in particular, we worked side by side (in the Zoom sense of the term!) to ensure a successful response to the most unexpected crisis we have ever faced. I am very grateful for his hard work and committed approach to the CU Safely Back project, and I look forward to spending one more year by his side.

Glenn’s vision for our university includes an unwavering commitment to distinctiveness. His focus always has been to set Chapman apart by bringing in programs that only Chapman can offer, and by recruiting top faculty members with unique expertise and research. Through Glenn’s work with our academic deans, this distinctiveness contributed to Chapman’s record-setting growth over the past several years. During Glenn’s tenure as provost, Chapman’s academic enterprise has achieved historic milestones. In 2019, our Carnegie Classification was elevated to recognize us as a “high research activity” school (R2), triggering U.S. News & World Report to officially move us into the national rankings. In the same year, we launched our new Fowler School of Engineering, greatly expanded our focus in the health sciences and moved into the incredible new Keck Center for Science and Engineering.

Additionally, our focus on diversity and inclusivity has expanded under Glenn’s leadership. With the launch of a new strategic plan for diversity and inclusion, we’ve begun intentional efforts to recruit students of color, increasing our student diversity to more than 40% non-white students. He supported the creation of new academic offerings, such as our minor in Latinx and Latin American Studies and our new Africana Studies minor. In addition, he has increased the number of women and people of color in key academic leadership positions. Our campus embraces and celebrates diversity, and we will continue to grow as Glenn recruits to fill a new leadership role dedicated to diversity and inclusion.

A project of which I am particularly fond is the Provost Lecture Series, which was led by Glenn and has brought to campus notable speakers such as Doris Kearns Goodwin, Michio Kaku and Jonathan Haidt, plus, had not it been for the coronavirus pandemic, Henry Louis Gates Jr. this past spring. I believe that promoting diversity of thought and perspective exemplifies the university’s purpose as an academic community. These events brought us together for intellectual evenings, while also bringing new people to our campus to experience what makes our university community so amazing.

While I can continue to highlight examples of his leadership, it’s enough to say that Glenn will be missed as our provost.

This summer, we will establish a search committee and launch a national search with the goal of having a new provost in place by June 1, 2021.