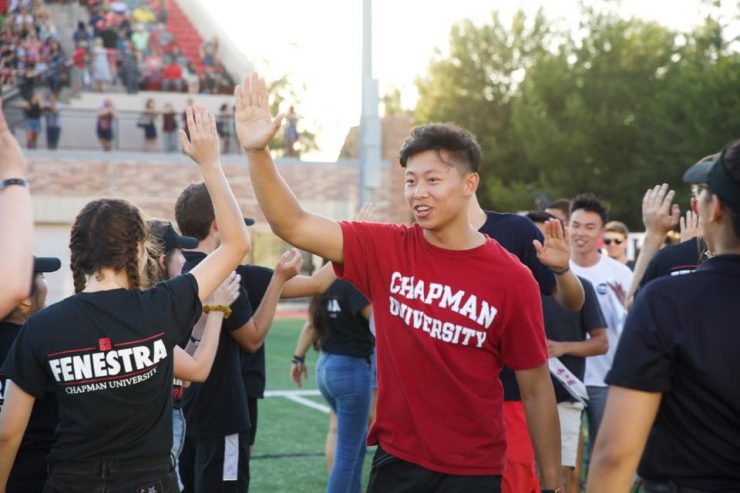 Welcoming the Newest Members of the Chapman Family The class of 2023 is embraced with warm greetings, orientation events and ceremonies.

There’s a reason why so many movies show families helping students move to college: it’s the beginning of an exciting new chapter. That played out in real time this week as Chapman University welcomed nearly 1,800 first-year students to campus, a group that includes representation from 43 states and 32 countries.

Orientation week for first-year students is five days long and includes more than 50 events. The first two days focus on events for students and their families. Here are some highlights.

Screenwriting major Dairian Bowles and his mom, Melissa, made the trek to Orange all the way from Mississippi. “I’m excited and nervous about moving to campus,” Dairian said. “I hadn’t left the South until this year, and I’m looking forward to meeting interesting people.”

Dairian’s roommate is also a student in Dodge College of Film and Media Arts, as are the rest of the people living on their floor. All Chapman first-year students live in Fenestra Living Learning Communities, where housing is assigned according to students’ academic program.

Martina Gil, a sociology student from Brazil, had similar feelings. “At first, I was a little nervous about making such a big transition,” she said, a bit out of breath after moving an armload of boxes. “But the Resident Advisor on my floor is nice and created a welcoming environment. It’s starting to feel like home already.”

Welcomed Into the Chapman Family: Convocation

At convocation, President Daniele C. Struppa elaborated on what it means to be a part of the Chapman family: it’s a “support system of faculty, staff, fellow students and administrators,” he said. It’s also a group of people who push each other to strive for their best. Part of how Chapman does that is by “providing students with exciting research and internship opportunities, as well as vibrant clubs and Greek life chapters.”

After only one day on campus, Jorge Quezada and his daughter, computer science major Venezia Quezada, already felt like the school was becoming a second home.

“Orientation has given us the confidence that Chapman will teach Venezia to be a great citizen, to always help and respect others and pursue improvement,” he said.

A key moment was when students exchanged stoles (the sashes people wear at graduation ceremonies), placing theirs on the shoulders of the person next to them. Vice President for Student Affairs and Dean of Students Jerry Price noted that the exchange “symbolizes the spirit of interdependence and reciprocity that defines the Chapman experience.” Students will keep that stole, decorating and personalizing it to have as a memento of their time at Chapman.

Closing out the first day of orientation was a lively fireworks display over campus.

The Candle Lighting takes place at the end of the second day of orientation, marking the end of family activities. It also provides an opportunity for new students to express gratitude to their parents for helping them get here.

At the ceremony, current students gave speeches about each of Chapman’s four pillars: intellectual, physical, social and spiritual. Those pillars are the foundation of the University’s educational philosophy.

Each speaker talked about what their pillar meant to them, and invited first-year students to find their own meaning while here. New students then lit their candle and used it to light another student’s, “passing on the flame of the four pillars,” as Chaplain to the University Shaykh Speight said. To close the ceremony, students gave their parents their candle and thanked them for all they’ve done.

After candle lighting, new and returning students gathered in Wilson Field for Playfair, a celebratory icebreaker with nearly 2,000 participants.

For the rest of the week, students can attend any of more than 30 events. These include  Lunch With Faculty, where students can begin making one-on-one connections with their professors, and We Are Chapman, which showcases the diverse cultures and experiences that make up the Chapman community.

Orientation activities will be held up until Sunday, August 25, the day before classes begin. More photos of orientation week are available on Chapman’s Facebook page.