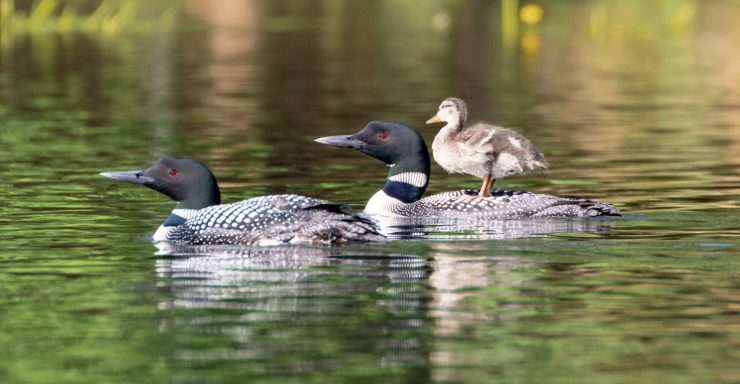 In a story worthy of Hans Christian Andersen, a pair of chickless loons have adopted an orphaned mallard duckling, puzzling even experienced researchers. Chapman University biologist Walter Piper has studied loons for 27 years, and he’s astonished.

“No one’s ever seen this type of foster family before,” says Piper, Ph.D., who leads the Loon Project, which since 1993 has tracked and studied the migratory birds on more than 200 lakes in northern Wisconsin.

The unlikely adoption was first noticed in June by Loon Project volunteers, who closely monitor nests for signs of chicks. In this case, cracked eggshells led to the discovery that a mallard duckling who had been adopted by lonely loons whose own chick had died.

Loons often adopt orphaned chicks of their own species, and there have been cases of loons taking in ducks such as spectacled eiders and goldeneyes, which exhibit behaviors similar to those of loons. But never mallards.

Photos and video of the unlikely family quickly spread on the Web, making the parents and their chick multimedia darlings. Piper has been interviewed by reporters from TV networks, newspapers and online outlets.

“This discovery is fascinating because it is a ‘natural experiment’ that allows us to see how one species of bird responds when it is placed under the care of another, very different species,” Piper says.

Typically loons and mallards don’t get along. In fact, loons sometimes attack and kill mallard ducklings.

The two species don’t even share habits. While loons dive deep into lakes to forage for food, mallards feed by skimming the water’s surface.

But this mallard duckling mimics Mom and Dad, earning the nickname “The Amazing Diving Duckling” as he reaches loon-like depths. He even eats fish – something a normal mallard duckling would never do.

“It’s pretty cool – and rare – to see an interspecifically fostered bird appear to learn a foraging mode from the parents … one that its own species does not exhibit,” Piper said in an article for the National Audubon Society.

“This is a dramatic natural demonstration of behavioral flexibility or malleability in an animal,” Piper says.

As the little mallard matures, it’s likely he will eventually find his own kind and assimilate, Piper says.

However, since this duck imprinted on loons, there could be some confusion when he “goes back to being a mallard,” Piper adds. it’s possible the mallard might even try to mate with loons.

“It would be very surprising if this duck were to form a notion that a loon was a suitable mate, but your guess is as good as mine,” Piper said in an article for the National Audubon Society.

Meanwhile, Loon Project participants eagerly document each new phase in the life of a mallard that clearly has imprinted on more than his parents.

“I never wanted to fall in love with this duckling,” Piper writes on the Loon Project blog. “I thought that Daffy and Donald had ruined ducks for me forever. But this little guy’s plucky adaptability might just turn me around.”

An unlikely friendship has bloomed on the waters of Wisconsin as a pair of loons adopted an orphaned duckling.