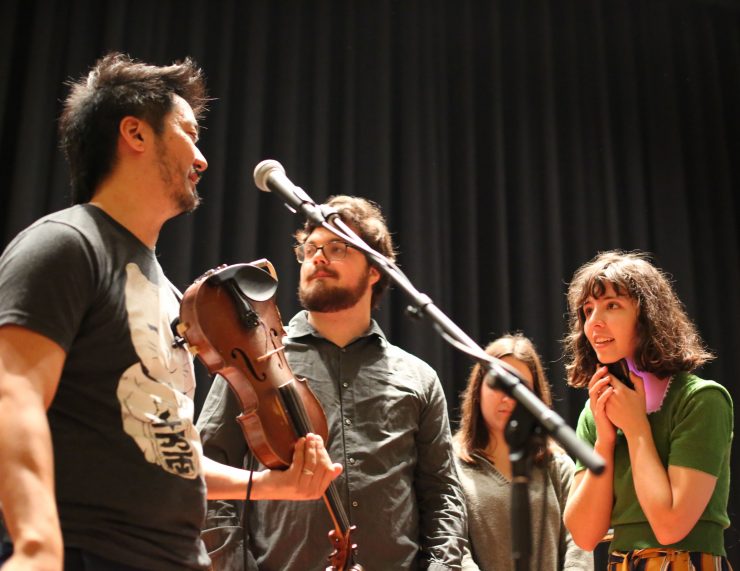 Bella Pepke, a cellist, listens intently to Kishi Bashi during the students' master class before his show in the Musco Center.
Arts & Film

Standing on the stage of the all-but-empty Musco Center for the Arts with a small group of students on a weekday afternoon, the musician known as Kishi Bashi showed them how to create artistry with their feet.

Spiky-haired and effortlessly cool, Kishi Bashi — the stage name of the classically trained violinist Kaoru Ishibashi — needs only an instrument and his eerily beautiful falsetto to entertain. But the mind-blowing part of his music comes through his feet, as he demonstrated for an intimate master class of seven students from Chapman University’s Hall-Musco Conservatory of Music before setting up for his recent concert.

Tapping his shoe on the toggle switches of an array of loop boxes and pedals small enough to pack into a suitcase that weighs less than 50 pounds – the standard airline limit – Kishi Bashi can go from one-man show to what sounds like a full indie pop band, by turns soaring and tender.

He often starts by plucking the strings of his violin to create a repeating rhythmic foundation, adds a melody on top, maybe another, and finally his voice, layer upon layer as he accompanies himself in an ever-shifting, dizzyingly complex performance.

“Basically, when I start recording, the loop begins as soon as I press,” he told the students as his words began to repeat. But Kishi Bashi was already on to the next sentence. “You have to depend on your own musicianship to keep in time,” as his voice began to echo, “keep in time, keep in time.…”

The students darted glances at each other, laughed and bounced along to the musical layers he added.

“Yeah, so I think we should get your instruments out,” he finally told them. “Some of you want to plug into this and try this out?”

A Connection Across Generations

The session with giddy students was just one of the highlights of a two-day visit to campus that included a Musco Center concert that ended with Kishi Bashi, banjo player Mike “Tall Tall Trees” Savino and a string quartet coming down off the stage for an unorthodox encore among the concertgoers. “Incredibly sublime,” Kishi Bashi called it later on Instagram.

For all that, the part of his visit that might reverberate the longest at Chapman was the public master class the night before in the Center for American War Letters in Leatherby Libraries, one of an increasingly frequent series of master classes with Musco Center performers.

It was there that Doy Henley, emeritus chair of the University’s Board of Trustees, and Charlene Baldwin, Dean of the Leatherby Libraries, publicly announced the work of an exploratory committee seeking to establish a center dedicated to understanding the role of Japanese Americans in World War II – both those who served in the war and the approximately 120,000 who were sent to internment camps by Executive Order 9066, forcing them to leave homes and businesses behind.

If the group’s plan is successful – and Henley says funding is still being figured out – it would establish a center on the Japanese American experience as a companion to Chapman’s Rodgers Center for Holocaust Education.

“We want to make sure we don’t ever forget what went wrong,” said Henley, who was a youngster during World War II and later had a close Japanese American friend who had lived through the era. “It’s always been in my mind, but now’s the time,” he said.

Kishi Bashi’s parents immigrated after the war and he was born in the U.S., but the story of Japanese Americans who were incarcerated has captivated him.

Inspired by the past, he is making a film called “Omoiyari: A Song Film by Kishi Bashi,” documenting his visits to such internment sites such as Manzanar, Wyoming’s Heart Mountain, and an Arkansas camp in Jerome, where he stood playing his violin in a vast snowy field. An album by the same name as the film, chosen for a Japanese word that means to have sympathy and compassion toward another person, will be released on May 31.

“With the execuitive order, this story is so important to tell again because there are new minority groups that are being oppressed by a government. That’s really the lesson here,” Kishi Bashi said.

In  the master class conversation with Chapman’s Stephanie Takaragawa, Ph.D. — an associate professor of sociology who recently wrote about her pilgrimage to the site of her father’s internment at Heart Mountain – Kishi Bashi talked about identity as well as the role of art.

“With any kind of academic discussion, it’s great to add music to it because it kind of opens your heart up. It softens the conversation,” he said.

Chapman already has a number of archives related to the Japanese American experience during World War II, including books, war letters and the archives of the Mendez and Munemitsu families related to Mendez v. Westminster, the landmark school desegregation case that unfolded in part because the Munemitsu family leased their Westminster farm to the Mendez family to try to save it as they were forced to relocate. In Chapman’s Huell Howser Archives, there is video of an episode of “California’s Gold” featuring Mary Kageyama Nomura, known as the Songbird of Manzanar. Nomura, in attendance for Kishi Bashi’s talk, posed for a photo with him afterward.

Also in the audience that night was cellist Bella Pepke ’19, who discovered Kishi Bashi’s music while riding to Los Angeles with a friend as a freshman. The next day, she and violinist Lisa Yoshida ’19, who was born in Japan and grew up in the U.S., would be the quickest students in the master class to unpack their instruments to try Kishi Bashi’s loop boxes, laughing at their mistakes and amazed by the sound.

“That was wild,” Pepke said afterward. “The fact that my cello was going through his setup was like, whoa! This is surreal. Master class with Kishi Bashi? I never thought that would happen in my life.”

Display image at top/Bella Pepke ’19, a cellist, listens raptly to Kishi Bashi during the intimate master class for students he held in Musco Center for the Arts.