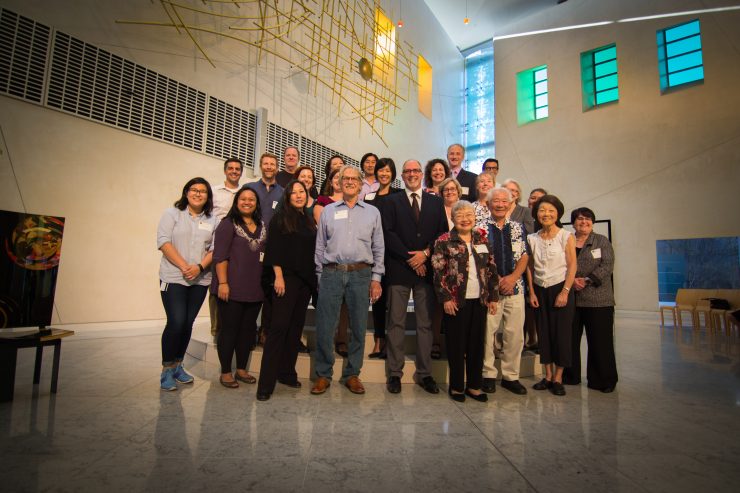 ‘You Must Go To Pilgrimage’ Inspired by an alumna, a professor finds the courage to exceed her own expectations.

I knew who Toshi Ito ’46 was because I had read her memoirs, but we didn’t meet until the 2011 event at which Chapman University launched its Asian Studies minor. When we first spoke, Toshi asked me whether my family had been interned. I told her that both my maternal and paternal grandparents were incarcerated at Heart Mountain in Wyoming, where I knew her family had also been sent. She asked if I had ever been there, and I remember hesitating with mild trepidation before I said no.

No one from my family had wanted to return to Heart Mountain, one of 10 camps where Japanese American citizens and resident Japanese aliens were incarcerated during World War II. I wasn’t sure I had the nerve to go to the camp on my own. Toshi looked at me with kindness, but she said firmly, “You must go to pilgrimage.” For the first time in my life, I realized that I really did.

I had been many times to Manzanar, the California internment camp. Toshi helped me realize I was using that site as an excuse for avoidance. Manzanar was more convenient than Heart Mountain, but it lacked family history. For me, there was something very problematic about that history. I was a bit afraid of it.

When I was little, my grandparents cleaned out their garage, and they showed me baby pictures of my dad when they were at Heart Mountain. But they didn’t talk about it – no one in my family talked about it. One of the few things I knew is that my paternal and maternal grandparents were neighbors in the camp. In fact, after my dad was born, the first people to bring a gift were my mom’s parents. I think they gave them something like three bananas. Such a small gift, but one that meant a lot.

Thanks to Toshi, in 2013 I did attend the annual Heart Mountain pilgrimage. I remember seeing Toshi there and speaking with her. She looked at me and said, “It’s important that you came here.” And she was right.

The experience of touring the camp site was fragmented. Most of it is a working farm, so the site is nothing like the camp where my family members were held. However, a few places are preserved; there’s a museum and exhibition space, with a collection of photographs. When I saw one of the photos, I said, “That’s my mom’s aunt!” It was very powerful, and in some ways unnerving.

Throughout my visit to Heart Mountain, Toshi was there to help. She introduced me to people, and every one of them became a friend. I felt safe and supported.

A few years later, I received an email from a woman named Patti Hirahara, whose father and grandfather took more than 2,000 photos at Heart Mountain during the internment. Patti had three photos of a young boy with the name Takaragawa. She contacted me because an Internet search had turned up my name. The photos were of my father. Patti brought me the photographs, and during our meeting I also learned that a recent documentary,“The Legacy of Heart Mountain,” chronicled Patti’s story as well as those of others, including Toshi.

We thought it would be great to do a screening at Chapman and invite Toshi to speak to the campus community about her camp experience and about her time at Chapman, where she finished her B.A. in sociology after being released from the camp. Toshi joined filmmakers Jeff McIntyre and David Ono in speaking at the event, which was held soon after Toshi’s 90th birthday. We had a cake, and we presented her with a presidential proclamation. Toshi was vibrant and funny as she contributed heartfelt remembrances to the discussion.

After the event, Toshi continued to stay in touch and even accompanied winners of the annual Rodgers Center Holocaust Art and Writing Contest to the Japanese American National Museum, where she shared her experiences with students from around the world. Last year, when plans were made for a campus mural celebrating “Visions of Chapman,” it was an easy decision to include Toshi in the mural. She will always be part of our community, and it is so fitting that she is now memorialized on campus.

Toshi helped me embrace parts of my own family history – parts with which I otherwise had not been able to come to terms. She made me braver than I thought I could be. She will be greatly missed.

Takaragawa’s grandparents, left, and other relatives are shown in World War II- era photos taken during their internment at Heart Mountain, one of 10 camps where Japanese American citizens and resident aliens were incarcerated.

Stephanie Takaragawa, Ph.D. (front row, third from left in the display photo), is an associate professor of sociology and associate dean of Wilkinson College of Arts, Humanities, and Social Sciences at Chapman University.