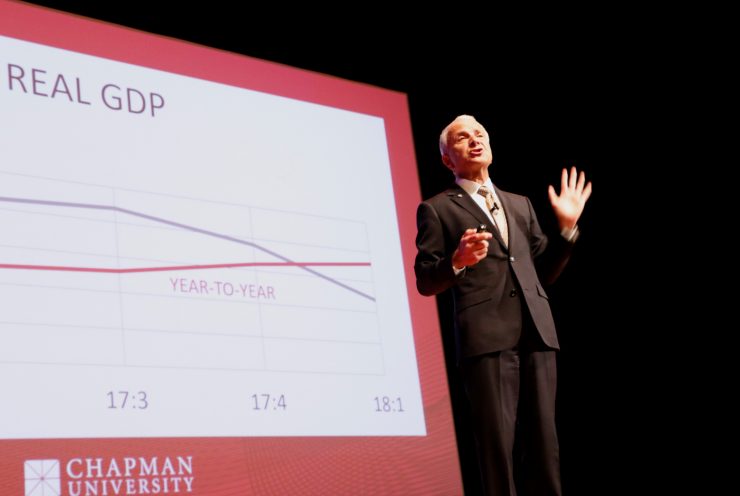 Slowing Economy Forecast for 2019 No recession is predicted, but growth will be tempered by a stock market correction and a cooler housing market.

Let’s start with the good news. The economic recovery will continue in 2019, becoming the longest expansion in U.S. history, according to the latest Economic Forecast from Chapman University economists.

But that recovery will inch along at a snail’s pace. The upward trajectory that began in June 2009 is flattening, said President Emeritus Jim Doti, founder of the 41-year-old forecast.

“This expansion is kind of long in the tooth. It’s getting stodgy,” Doti told attendees at December’s forecast conference.

Consequently, Doti and the team of economists at the A. Gary Anderson Center for Economic Research foresee growth of 2.6 percent, but no bear market or recession in 2019.

However, they predict that higher interest rates will cool the housing market, job growth will slow and the stock market will correct from its 2018 ascent.

They credit the Tax Cuts and Jobs Act for averting a worse scenario.

“We believe (the tax act) supported this higher investment spending that will keep the economy going longer than maybe otherwise. I personally believe if we didn’t have that tax cut we’d be talking about recession this year,” Doti said.

Still, they predict that the housing downturn that began in 2016 will quicken in 2019, with residential building investments dropping by 6 to 8 percent. Offsetting that decline will be a 4 percent uptick in nonresidential construction, such as commercial buildings, hospitals and schools. In California infrastructure spending supported by the gas tax in Senate Bill 1 will counterbalance the residential downturn even further.

That trend will be slightly stronger in Orange County. In 2018, the fastest growing job sector was construction, and that momentum is expected to continue, they said.

California will also experience slower job growth in 2019 because of already low unemployment rates and a flow of immigrants leaving the state – most often to Arizona, followed by Texas, Oregon, Washington, Nevada and Utah.

While the trade war with China shouldn’t be discounted, Doti said, he is relatively hopeful that it won’t escalate.

“I think it will be resolved,” he said. “Both countries have a lot to lose if they don’t settle things. Especially China.”

Throughout its 41-year history, the Chapman University Economic Forecast has achieved an unusually high standard of accuracy. Founded in 1978, it was the first economic forecast in the U.S. to be based on an urban econometric model. The forecast continues to provide students in the Argyros School of Business and Economics with hands-on experience using econometric tools not only to help revise and update the model, but also to analyze current economic trends.