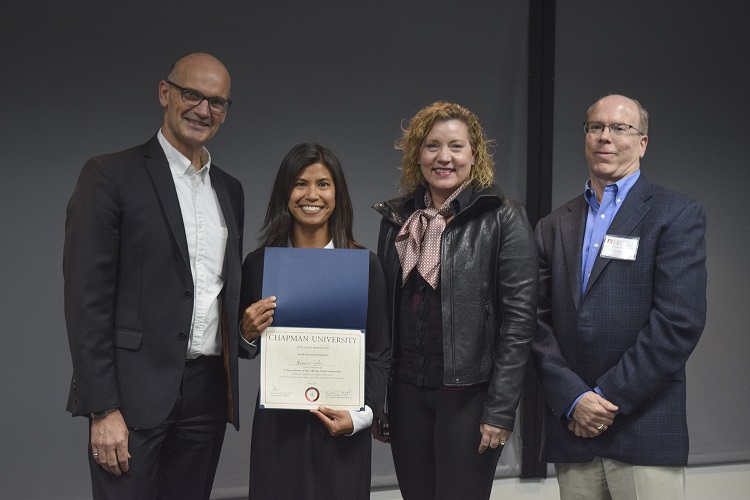 It’s a numbers game: Fifteen Chapman University graduate students representing six colleges had just 180 seconds and one slide to share their research work, passion and findings with the judges on Wednesday evening. A countdown clock kept students on pace as they addressed everything from Civil War letter writing, financial literacy, to the Gypsy Holocaust and having a crush on a pop star.

Three Minute Thesis competitions, or 3MT, originated at the University of Queensland, Australia in 2008. Initially created for doctoral students; it challenges students to present their research in an engaging format easily understood by an audience unfamiliar with the topic. Ten years later, it’s an annual competition held at more than 200 universities worldwide.

Not only a fun, entertaining learning opportunity for the audience, it more importantly it serves as a way for students to develop and practice their presentation, research and academic communication skills.

“I promise we’re not going to come drag you off the stage if you go over your time,” said Judge and Vice President for Research Tom Piechota, Ph.D., as he welcomed the students. The other judges included Richard Redding, Ph.D., vice provost for graduate education and Lisa Sparks, Ph.D., professor and dean of the School of Communication.

“Having students present their research and scholarship effectively is an important professional development skill as they look to highlight the significance to a broad audience,” Piechota said. “It is important for Chapman to hold events like the 3MT and the Graduate Salon so the exciting research and scholarship of our students is shared and to further build the graduate student culture at Chapman.”

Students were judged on their communication, delivery, visuals and timing. Each used just one slide for context and no notes as they explained their research to the audience. Relying on their knowledge and memorized stats, contestants plucked key points from their work, naming specific authors from their research and presenting an array of emotions, including comedy.

Zahn’s results showed that 18 of her 22 tested shark cartilage products could be identified to the species or genus level for an overall success rate of 81.8 percent. This optimized methodology increased the success rate from 36.3 percent in a previous study. The end goal of using this technique, she hopes, is that it will bolster the enforcement of labeling regulations and anti-trafficking laws, and help to identify mislabeled or vulnerable species that can be found in shark cartilage pills.

Zahn is a second year double major completing her Master of Business Administration and Master of Science in Food Science. The mother of four said she had to find time to practice before the competition.

“I practiced out loud while I was driving, which may not have been the safest,” Zahn said laughing. “My kids were also a great audience even they interrupt quite a bit. Once I saw the flyer promoting this, I knew I wanted to try it. I like the format and it’s a good way to practice speaking to a non-technical audience.”

Danika Hazen, received second place and $500. The Master of Arts in English and Master of Fine Arts in Creative Writing dual major shared her research titled, “Reimagining the World to Include People like Me”: Reframing the Canon through Young Adult Literature about Women.” She examines how female authors have taken canon stories and rewritten them to reflect female and queer perspectives within the space of the young adult novel.

Chapman University Presidential Fellow and world-renowned paleontologist Jack Horner provided the keynote address of the evening titled “How to create a living dinosaur, and a glow-in-the-dark pink unicorn.”

Horner teaches undergraduate students each spring semester. Since 2003, he has been working on a project to recreate a dinosaur by genetically nudging the DNA of a chicken to develop a dino chicken, or “chickenosaurus.” He served as the technical advisor for all five Jurassic Park films and was the inspiration for one of the lead characters. He is now working with universities worldwide and is in the process of patenting a quick demineralization method he discovered.

“We are very close to making a dinosaur,” he told the crowd. “And I mean…within…soon.” 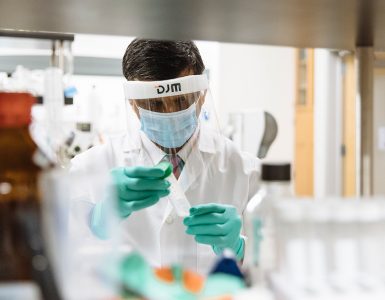 Each year, about 2.8 million Americans get bacterial infections that resist treatment by the antibiotics designed to knock them out. About 35,000 of those patients die – globally the mortality figure is 700,000...