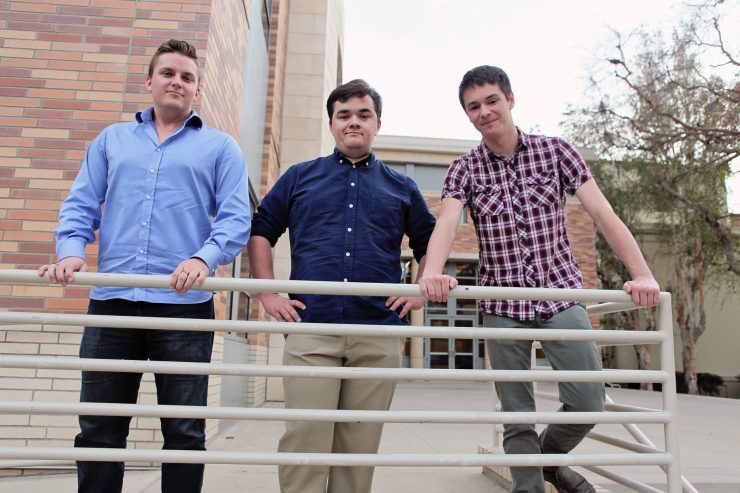 Never doubt the life-changing powers of a gifted science teacher. Sometimes she can even transform the thinking of a jaded eighth-grader. Aaron Grisez ’19 was that disaffected middle-schooler. He thought Ms. Herrington’s bubble station and her other immersive science experiences were super cheesy – until her enthusiasm and expertise won him over.

“I had so much fun in her class, and that stuck with me,” Grisez recalls. “I wanted to get back to that. Undoubtedly that was the start of my unending interest in science.”

Now that transformative power is in Grisez’s hands. As an undergraduate at Chapman University, he is engineering a mobile app that marries his two academic passions – music composition and quantum physics – to make learning less intimidating and more fun. The next step in his project is entrepreneurial: pitching his app, called Qhord, to investors and then sending it out into the marketplace.

The project started in fall 2016, springing from conversations Grisez had with his Chapman physics advisor, Justin Dressel, Ph.D.

“We talked several times about how quantum mechanics seems to be this esoteric thing – maybe even mystical, in some weird way,” Dressel says. “And yet with the rise of quantum computing, there’s a growing demand in the workforce for people who understand it at least at a fundamental level.”

Over time, ideas proposed by Grisez and explored on a whiteboard morphed into a mobile app that features an instrument for composing music – sort of a piano built on quantum concepts. The language of music comes naturally to Grisez, who started playing the piano at age 5 and whose brother now performs with the New World Symphony in Miami. Grisez saw parallels in the vocabularies of music and quantum physics.

“A melody is very much like a quantum trajectory,” he says. “It can go up and down, and what happened in the past of a melody can affect what will happen next.”

With Qhord, players weave through puzzles and challenges as they explore the quantum keyboard. “As you demonstrate a mastery over concepts,” Grisez says, “you start getting a larger palette for your exploration.”

Like Grisez’s own eighth-grade science experience, an initial spark leads to a deeper dive and a growing level of understanding.

“The most exciting thing to me is that it really hits the area of most need – public outreach and understanding of concepts while still being fun,” Dressel says.

For Grisez, Qhord is providing immersive experiences that fast-track his own growth in a range of pursuits – as a music composition and physics double major, as a teacher and investigator, and as the CEO of a startup.

He and Qhord colleagues Michael Seaman ’19 and Ethan McDaniel are now refining their project through Chapman’s Launch Labs business incubator program. At the same time, Grisez has been preparing to present at the Southwest Quantum Information and Technology workshop in Santa Fe, N.M., and at the American Physical Society March meeting in Los Angeles.

“It’s rare for an undergrad to have the self-confidence to say that he wants to give a 10-minute talk at the largest conference for physicists in the world,” Dressel says. “But then Aaron’s combination of fearlessness and flexibility is unusual.”

That flexibility comes in handy when Grisez hits a hurdle, like when he was working through bugs in the Qhord interface and inadvertently destroyed his own Android phone “purely because I got the icon size wrong,” he says. It’s in such moments of problem-solving that he feels most like a working engineer.

“I consider myself an engineer of my own field,” he says. “I’m a quantum musical engineer. By that I mean that the thing I’m most passionate about – the thing I really want to get good at – is creating things that never existed before. I think that’s something I share with all engineers.”