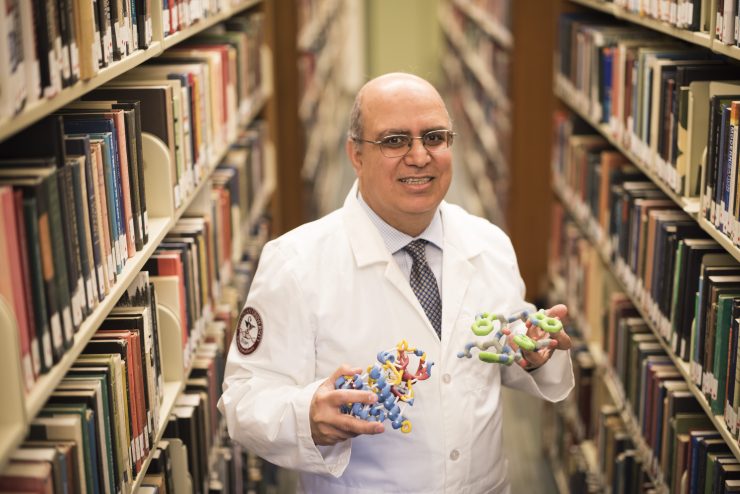 It’s one thing to create new drugs. It’s another to scoot them toward their targets in the corners of the human body where tumors, infections and cancer cells set up shop.

Enter the biomedical engineers – scientists skilled in building microscopic solutions to some of medicine’s biggest problems. In the labs of the Chapman University School of Pharmacy (CUSP), several researchers at the Center for Targeted Drug Delivery are exploring this promising world. They aim to make drugs land where needed, from infected bones to cancerous tumors, and reduce the amount of side effects that chemotherapy and powerful antibiotics wreak elsewhere in the body.

“Many people think engineering is only devices and instruments,” says Keykavous Parang, Ph.D., professor and associate dean of research, graduate studies and global affairs at CUSP. “But actually a lot of us are doing molecular and nanomaterial engineering.”

Still, they do what any engineer does – build something new to solve a human problem. Except for this added challenge – these micro inventions have to function inside people. Stealth and disguise are often the techniques of choice.

For Parang, that means creating peptides that can hold anticancer drugs and survive in the human body, but unravel when they encounter cancer cells’ acidic environment. So when they arrive at a tumor, they release the drug on target, improving its efficacy while reducing side effects elsewhere. A 3D model of one such molecular creation sits on his desk.

“It’s a building block of peptide nanomaterial,” he says, pointing to the plastic model, which looks bit like a cluster of noodles holding hands. “A small delivery device.”

Over in the lab of Vuk Uskokovic, Ph.D., the challenge is on to plan the demise as well as the success of an injectable paste. The material Uskokovic is hoping to develop could have potential applications for cancer and bone infection therapies.

Typically, physicians treat bone infections with large doses of antibiotics and sometimes surgery. But the process could be improved by strategically delivering antibiotics to an infected site, rather than dispersing it into the bloodstream, the assistant professor says. The paste Uskokovic is working with contains molecular material that bonds with antibiotics. Injected where it’s needed, it would remain there to deliver its infection-fighting payload thanks to its self-setting properties. Once healthy, bone has good potential for regeneration, and the cementlike paste could even be a temporary structure to aid that function, he says.

Temporary being a particularly tricky part.

“That paradigm of constructive deconstruction. That is not something we see in any other field of engineering,” Uskokovic says.

Similarly, Hamidreza Montazeri Aliabadi, Ph.D., is working to craft nanoparticles that can taxi anticancer drugs directly into cancer cells, where they can best stop the cells from synthesizing protein, the engine of growth for all cell development.

“They tend to penetrate cell membranes very easily,” he says of the carriers. “They’re like shooting a needle through a balloon.”