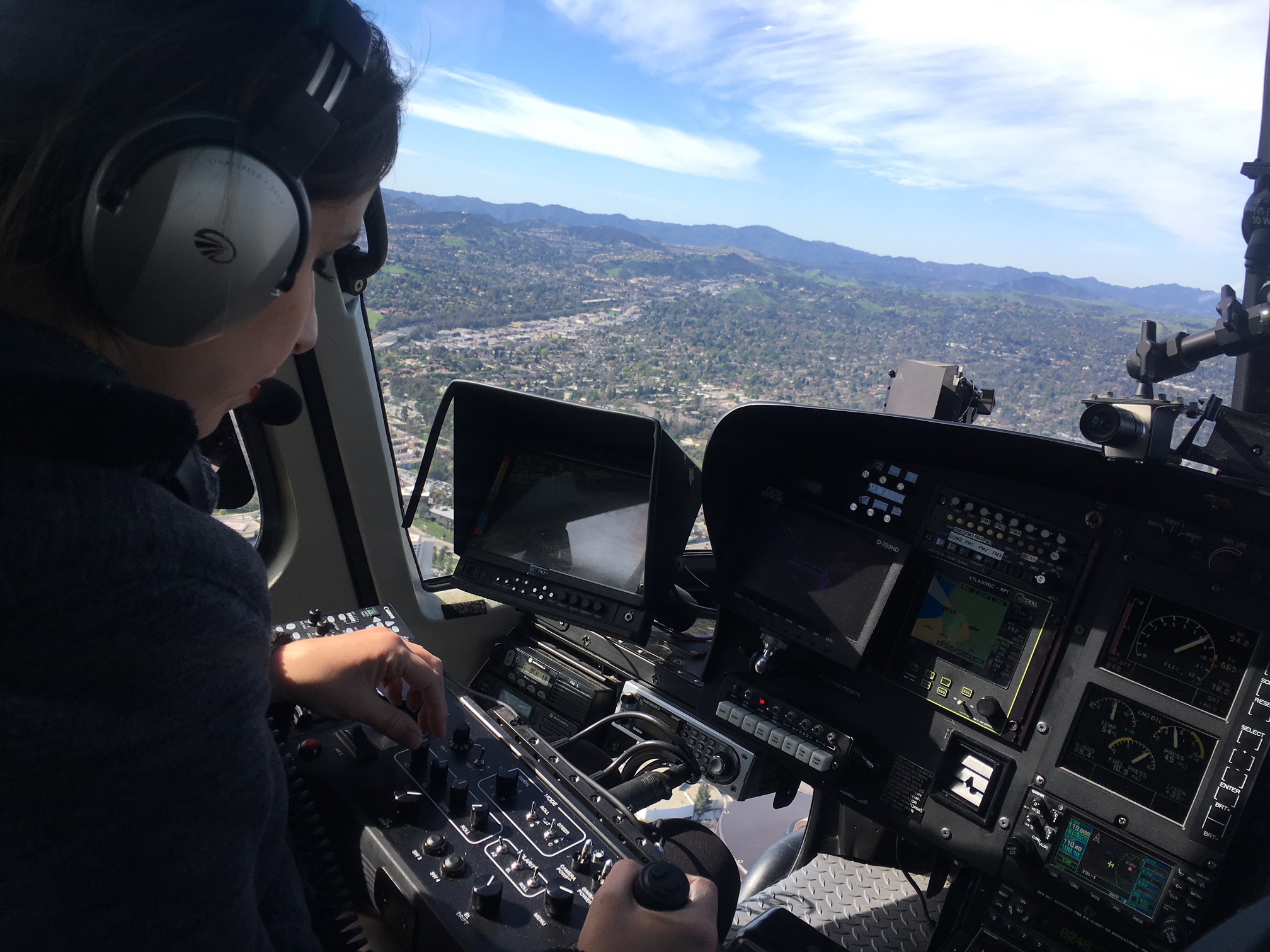 For Chapman alumna Eliana Moreno ’10, a typical day starts at her office in an airplane hangar, where she prepares for news to break. On Dec. 6, she didn’t have to wait long.

Moreno is an aerial videographer and reporter for KNBC4, and after working the night before she had slept two hours on the couch in her office so she could cover the morning shift for a colleague. By 4 a.m., she and her helicopter pilot were on their way to the Thomas Fire in Ventura County when the assignment desk at NBC radioed her to check on reports of a brush fire near the Getty Center and the 405 freeway.

“I was looking down at my bag or something when we approached, and I heard my pilot go, “Oh, my God!” I looked up and saw the biggest inferno I’ve ever seen pop up out of nowhere,” Moreno said. “Within minutes it had grown to six acres, which is huge in an area like that – lots of residences and homes, as well as the Getty Center, which is filled with millions of dollars of art.”

Moreno was among the first reporters on the scene of the Skirball Fire, and her dramatic images conveyed the immediacy of the danger while her clearheaded reporting helped viewers plan routes to escape or avoid the area.

Even as she focused on her reporting, she couldn’t help but be concerned for the residents, some of whom she saw using garden hoses to fight the fire. “I was afraid for them,” she said.

She doesn’t take lightly the responsibility of communicating evacuation routes.

“It’s important for you to be right, especially when people’s lives or property are at stake,” Moreno said. “I always want to be first with the story, which may just be a journalist thing. But it’s most important to me that I’m right.”

Chapman taught her how to use a camera, edit and how to be a reporter. As she now takes on those multiple roles, she especially calls upon skills she learned in a sports broadcasting class. She says that covering breaking news is a little like football announcing, except that she’s doing both the play-by-play and the color commentary.

Of her Chapman study experience, she says, “I’m thankful that I took the time to be more than on-camera talent. I can do a little bit of everything, and that’s exactly what I need for my job.”