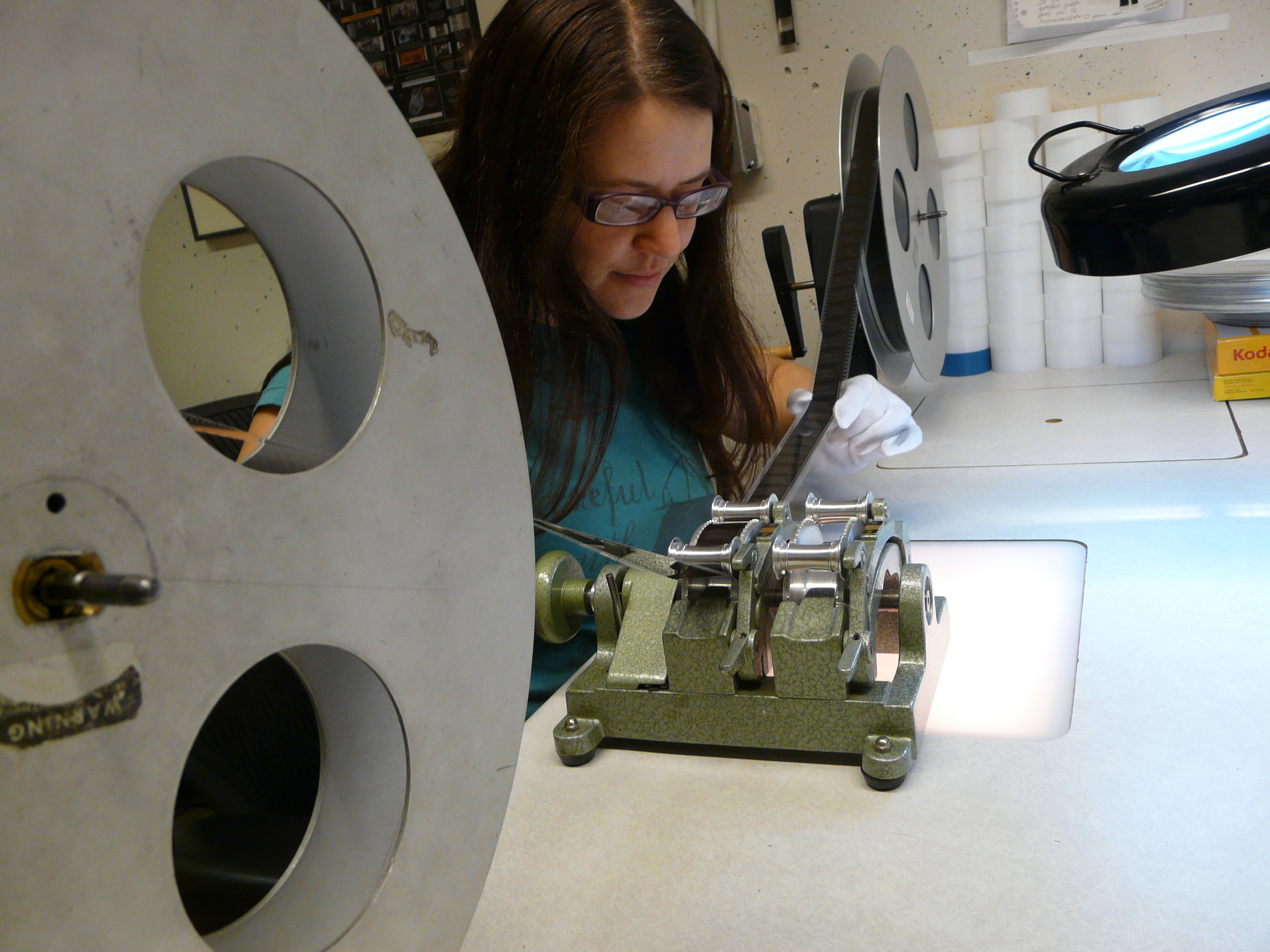 Rachel Parker '07, a library technician for the Library of Congress' film archives, examines nitrate film from the first half of the 20th century.
Arts & Film

As black-and-white images of old films flicker on the screen inside a Library of Congress theater outside Washington, D.C., laptop screens glow and moviegoers tap away at their keyboards, sometimes shouting out comments.

That is the scene at the annual “Mostly Lost” film festival, a unique gathering where film aficionados and historians convene to identify forgotten movies, lost details and the historical significance of films from the vast holdings of the Library of Congress.

Among the key organizers is Chapman University alumna Rachel Parker Del Gaudio ’07, a film studies major at the Dodge College of Film and Media Arts who landed her dream job in 2009 helping tend more than 100 million feet of nitrate film as a library technician for the Library of Congress.

When not planning “Mostly Lost,” she works at maintaining, loaning out and cataloguing the enormous collection, with a personal goal to fully replace the outdated filing system by barcoding every film.

“I knew before I even got to Chapman exactly what I wanted to do,” Del Gaudio said. “When I was 11, I was home in the summer and I’ve always been a night owl. I happened to switch channels to American Movie Classics and saw Sun Valley Serenade, with Sonja Henie and John Payne and the Glenn Miller orchestra. It’s such a delight. I loved it and started watching all these classic films.”

AMC and Turner Classic Movies were her first instructors, but after speaking to someone at the Library of Congress about how to prepare for a career as a film archivist, the Tennessee high school student sought out the Dodge College program because of the classes in film history and various genres. Del Gaudio was able to do independent study coursework and added a dose of American history classes such as the Department of History‘s Everyday Life in America course taught by Robert Slayton, Ph.D., who holds the Henry Salvatori Professorship in American Values and Traditions.

“I minored in Robert Slayton,” Del Gaudio said with a laugh.

Internships at the Library of Congress Moving Image Archive located in Dayton, Ohio, as well as USC’s Moving Image Archive and the Academy of Motion Picture Arts and Sciences, where she landed her first job, helped pave the way. Two years later, Del Gaudio landed at the Library of Congress, home of the largest film archive in the world. She doesn’t ever plan to leave.

“Whether my goal is to be head of the moving image department of head of the nitrate vaults, I don’t know. It keeps changing,” she said.

The “Mostly Lost” festival, held every Father’s Day weekend at the Library’s Packard Campus for Audio-Visual Conservation in Culpeper, Va., about 70 miles from Washington, is one of her great passions.

Most of the movies are silent films, and Del Gaudio and the other organizers bring in piano players to set the tone.

“We try to make it fun,” she said. “We’re basically asking people to give up three days of their lives to come and assist us. They’re in the theater for hours every day. So it’s really common for someone to start making jokes about what’s happening on the screen. It’s a little bit of a peanut gallery.”

Those who attend – almost 200 for the sixth “Mostly Lost” festival in June — include other film archivists, people in the film business, amateur movie buffs and historians.

“Someone will recognize a type of car, or know the historical facts and say, ‘Oh, this is based off a famous court case,’” Del Gaudio said. “It helps you go down the rabbit hole of identifying films.”

A lens on history

Looking back at movies from the early-to-mid 20th century reveals societal attitudes, Del Gaudio said, from more frivolous things such as feminine hygiene habits of the 1950s to perspectives on race.

“I’ve heard other people say, and I have to agree, sometimes it’s the horrible films that got really bad raps that are most telling of our society and what was happening at the moment, more than the really well-polished ones,” Del Gaudio said. “We work to preserve them so people can go back and see what an era was like, what was important, what was taken for granted and what the fears were. Films perfectly encapsulate that.”

Gazing at the late-night flickering of a TV before she was even a teenager, Del Gaudio found her life’s work. Part of her mission is that others’ life work should not be forgotten because of unidentified or unpreserved nitrate films.

“If that happens, the work of the actors and actresses, the screenwriters, the grips … it’s all for nothing and it doesn’t exist anymore,” she said. “I have to stop this.”