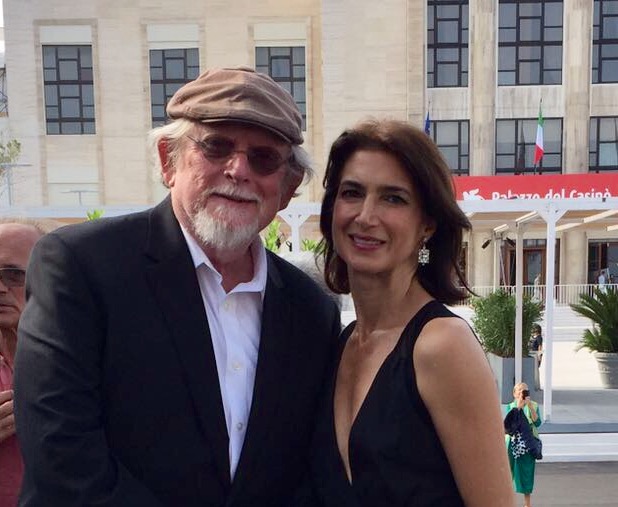 After a glamorous premiere in Italy at the Venice International Film Festival on Aug. 31, a new film based on the stories of Richard Bausch opens in France on Sept. 27.

The film, Espèces menacées (Endangered Species) is directed by Gilles Bourdos, best known for the acclaimed 2012 film Renoir. It is the second movie inspired by the work of Bausch, a Chapman University professor of English and creative writing, joining 1994’s The Last Good Time.

Bausch and his wife Lisa Cupolo, also a member of Chapman’s English faculty, attended the premier in Venice together, experiencing the full red carpet treatment.

“Standing on the red carpet was fun, and very odd — I mean I’ve been photographed many times in public settings, but never by paparazzi,” Bausch said. “The cameras sounded like a lot of buzzing insects. The photographers were all shouting at once: ‘Look this way. Look up. Look down. Over here.'”

At one point, Bausch leaned slightly toward French actress Alice Isaaz, the lovely young star of the film, and said “I feel a little like I’m in a police lineup.” Isaaz burst into laughter as she cut her eyes toward him, and cameras clicked away some more. “The whole experience was just wonderful fun,” Bausch said. “And the movie is brilliant.”

The film focuses on six seemingly unrelated selections from The Stories of Richard Bausch that intersect on themes of love and strained family relationships.

The narrative of ‘Fatality,’ a story about a father whose daughter’s husband is abusive, is central to the movie. Another of the stories focuses on a daughter who marries a man in his 60s, and yet another on a lonely man who phones sex chat lines for the actual conversation and human interaction. Throughout, a tie that binds the stories and lends itself to the film’s title emerges: The most endangered members of the species are female.

“There was a strand of marriages in the six stories,” Bausch said earlier this year, marveling that Bourdos saw connections he had not. “Some of them were written years apart, but if I had seen that, I could have written all six stories as a novel.”

An international distribution deal for the film subtitled in English could be forthcoming.

Display image at top/Richard Bausch and his wife Lisa Cupolo, also a member of the Chapman English faculty, at the Venice Film Festival. /Photo courtesy of Lisa Cupolo