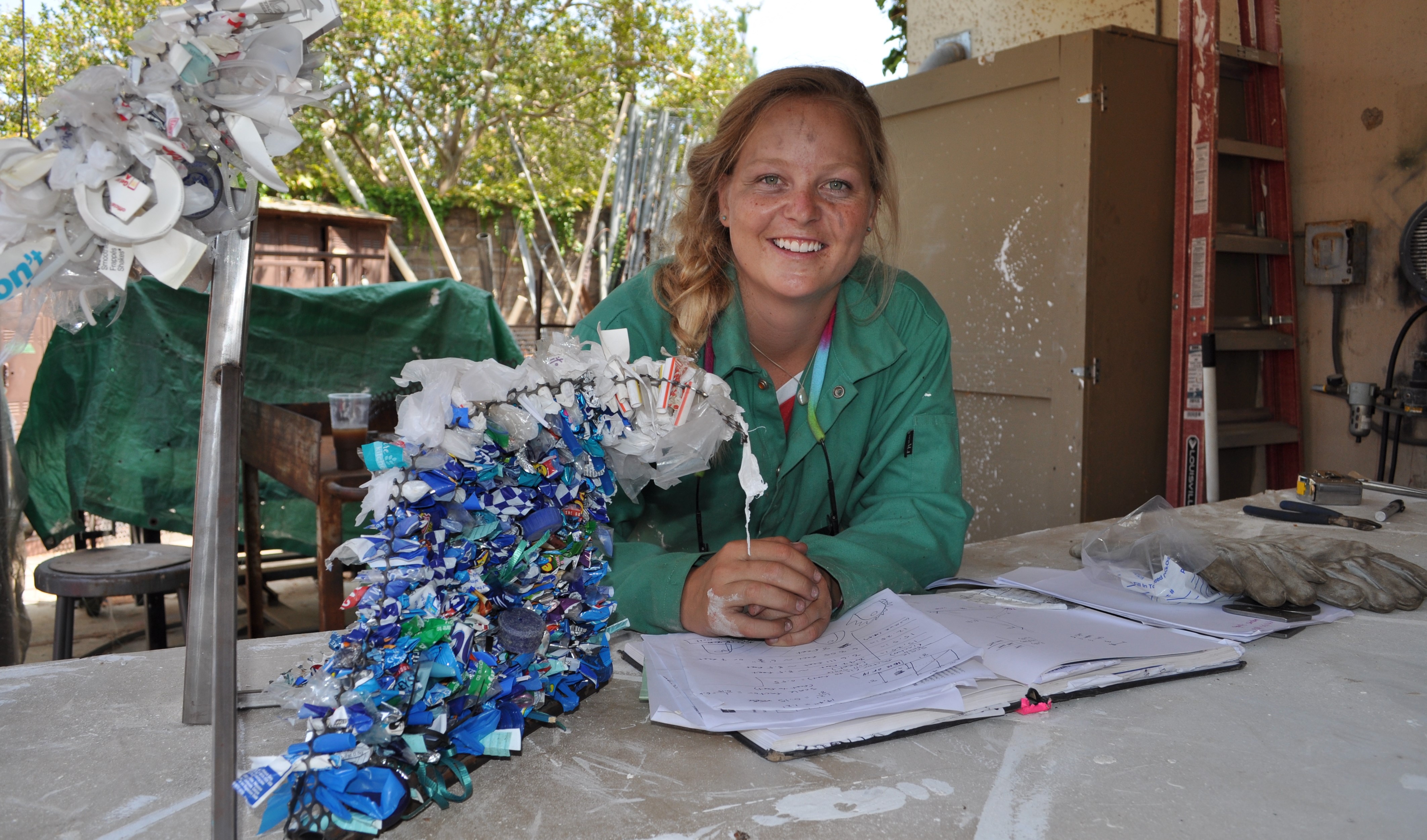 So many straws. Littered in beach sand. Swept into the watershed and onto the shoreline. Then carried out to sea by the tides.

“When you go to a restaurant, ask for no straw. You don’t really need it,” says Katie Peck ’17.

The Chapman University studio art major speaks from unique experience with straws, along with bottle caps, toys, fast food forks and all manner of plastic garbage that litters West Coast beaches. Peck spent her summer gathering such trash and spinning a portion of the mess into art that sends a message about ocean pollution. She’s putting the final touches on Weaving the Tides, a 10-foot-wide wave-shaped sculpture covered in plastic trash.

The artwork will be displayed at lifeguard tower No.2 at Huntington State Beach as part of the Ocean Conservancy’s International Coastal Cleanup on Saturday, Sept. 16.

Peck says she was inspired to create art from trash because she believed it would help people understand the problem of so-called “garbage patches” of man-made debris swirling in the oceans.

Over the decades, plastic litter, as well as lost cargo from shipping freighters and fishing vessels, has landed in the ocean. Thrashed in the currents, tides and winds, it disintegrates into ever smaller particles, much of it eventually becoming microplastics that pepper vast stretches of the ocean. Some claim the areas are the size of Texas, but scientists with the National Oceanic and Atmospheric Administration (NOAA) say there is no definitive research on their size. That’s partly because these debris accumulations move and change throughout the year. But they are typically very large and hazardous to marine life, according to NOAA.

That’s pretty hard for many people to fathom, Peck says. And whatever their size, preventing plastic litter from ever reaching the ocean is a key part of tackling the problem. So she’s making her wave of trash about the size of a small sail, illustrating how quickly just a portion of the debris collected by one person over a few weekends can pile up. Over the summer she experimented with a variety of techniques and concepts to create an interactive work that viewers can experience by strolling under the wave’s crest.

The spark for all this creativity was Chapman’s Summer Undergraduate Research Fellowship (SURF) Program. Under the guidance of faculty, SURF fellows receive up to $3,000 to pursue a variety of research and creative projects. Professional development workshops, faculty seminars and networking events are also part of SURF. This summer’s projects ranged from the development of a gaming app to explore physics concepts to research into methane levels in salt marshes.

With guidance from art professor Lia Halloran, Peck says she loved the opportunity to pursue such a project beyond the traditional classroom setting – and even the upcoming challenge of moving the sculpture in pieces for assembly at Huntington State Beach and then on to a gallery in Anaheim’s GardenWalk.

But as she nears completion of the sculpture in an outdoor campus studio in Moulton Hall, she says her biggest takeaway is not the sculpture itself, but the dichotomy she’s created. She carefully selected a palette of blue and fluffy white plastic beach litter to simulate water, which takes on a strange beauty when woven together. Welding the frame was sweaty work, but fun. She enjoyed shaping stiff metal mesh into a graceful arc, ready for its blanket of garbage.

She’s pleased with the results so far. And yet, it sprung from trash. Peck nods and smiles as she takes a break from welding to consider that creative truth.

“It’s an interesting situation,” she says.

Display image at top/With studio dust smudging her face, Katie Peck looks over sketches and a scale model of her wave sculpture.