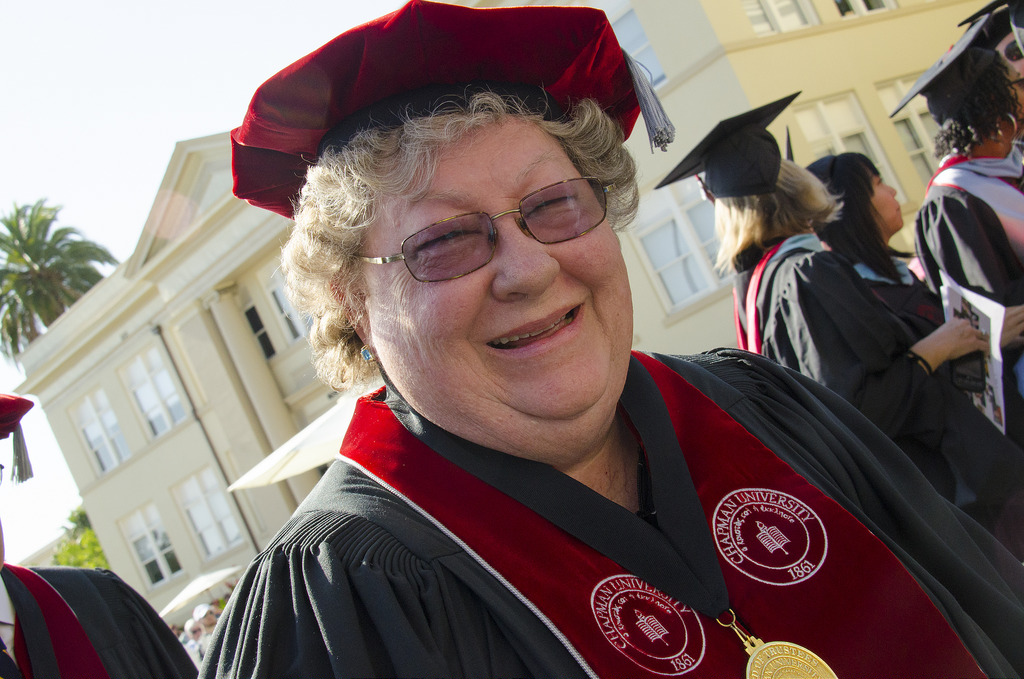 Announced at Chapman University’s opening freshman convocation ceremony this evening, the College of Educational Studies will now be known as the Donna Ford Attallah College of Educational Studies, or Attallah College. Chapman University President Daniele Struppa made the announcement in front of a crowd of 1,600 incoming freshmen and their parents about the new name for one of the University’s oldest colleges.

The College’s new namesake, Donna Ford Attallah, graduated from Chapman University in 1961 with a bachelor’s degree in education. She subsequently taught kindergarten and first grade in the Cypress School District for the next 40 years. It was there that she met her husband, the late Fahmy Attallah, a school psychologist at the time.

Donna was raised in Victorville, Calif., and Fahmy was from Egypt. He was a swimmer his entire life – participating in the 1948 Olympics in London. When they met and married, he was 30 years her senior. Having no children of their own, they considered the students their children. They were avid savers and began purchasing real estate in addition to their work in education. In fact, they skipped their honeymoon cruise to Europe in order to make a down payment on their first apartment complex.

Together, the Attallahs became supporters of Chapman University, including creating an endowed chair in the Office of Church Relations; endowing the Donna Ford and Fahmy Attallah, Ph.D. Library of Arts and Humanities within Leatherby Libraries; the Donna Ford Attallah Endowed Professorship in Education, and served as namesake for the University’s iconic Attallah Piazza in the heart of campus, which features four pillars with inspirational words written by Fahmy Attallah, also a poet.

“Donna is such a special person to Chapman – it just makes perfect sense to name the College of Educational studies after her – an alumna and longtime teacher,” said Chapman University President Daniele Struppa. “She loves the students, the classroom, and teaching; her nurturing demeanor, patience for learning, and sense of humor are her special blend she brings to the teaching profession and to her friendship to Chapman – Attallah College now has that legacy for its namesake and future graduates.”

The College of Educational Studies began as the Department of Education in 1958. It was renamed the School of Education in 1991, and became the College of Educational Studies in 2008. Through the years, it has always been the home of “teacher education” programs―the only course of study consistent throughout Chapman’s 156-year history since 1861. With 11,500 alumni around the world as teachers, school counselors, psychologists, community and education leaders, scholars and researchers; it is a longtime Southern California fixture for students aiming to pursue their careers in education.

“Having our college named for Donna Attallah is such an honor,” said Margaret Grogan, Ph.D., dean of Attallah College. “Her lifetime commitment to education is a testament to the importance of creating more teachers for the lifelong learners in the world.”

Donna Attallah also serves on Chapman’s Board of Trustees, a role she has held since 2009. Together with her husband, the Attallahs have a 35-year history of supporting Chapman. Since 1982, the Attallahs have given gifts and commitments totaling $15.5 million to the University.

Of Chapman’s 10 colleges, this marks the 4th one named for a graduate following the Wilkinson College of Arts, Humanities, and Social Sciences, which was named in 1991 to honor J.E. Wilkinson, who was President of the Board from 1939 to 1963, and his son Harmon Wilkinson who graduated from Chapman in 1935; the George L. Argyros School of Business and Economics named in 1999 in honor of Ambassador George L. Argyros, class of 1959; and the Dale E. Fowler School of Law named in 2013 in honor of Dale E. Fowler, class of 1958.

Attallah College is located in one of Chapman’s historic “core buildings” built during the turn of the century. Reeves Hall, which is currently undergoing an extensive restoration process, will be the home for Attallah College when it reopens in spring 2018.

About the Donna Ford Attallah College of Educational Studies