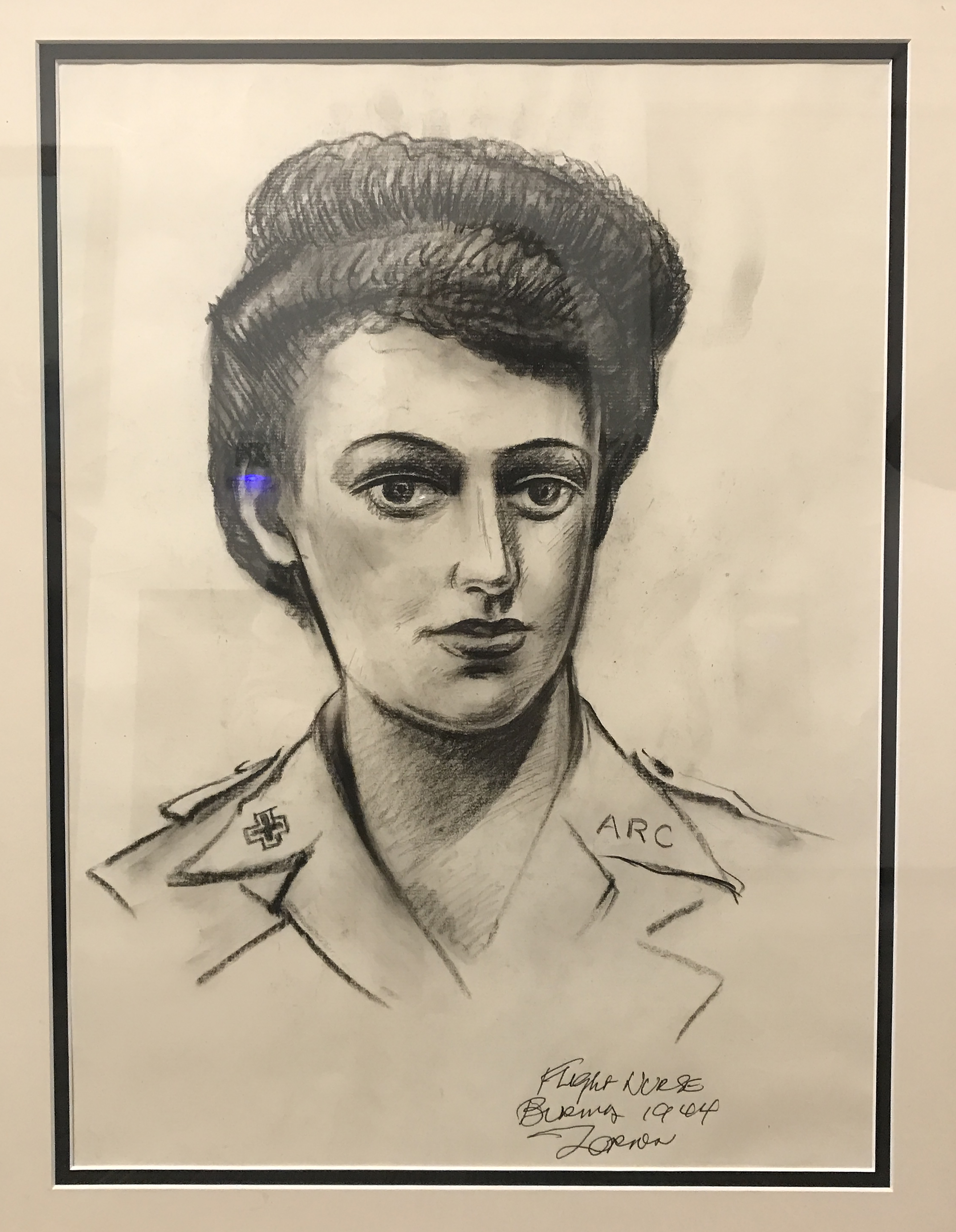 Who is she? Zornes Family donates World War II portrait to Hilbert Museum

Maria (Zornes) and Hal Baker, the daughter and son-in-law of acclaimed California artist Milford Zornes (1908-2008), have donated a beautiful and mysterious Zornes portrait of a World War II nurse to the Hilbert Museum of California Art at Chapman University.

“Beautiful” because the charcoal portrait was created in Zornes’ signature dashing-yet-boldly delineated style. “Mysterious” because no one knows who this brave young woman is. The only clues are these: she’s clearly wearing American Red Cross insignia, and Zornes wrote “Flight Nurse” and “Burma, 1944” on the portrait.  Perhaps someone out there reading this can help!

“We’re so grateful to Hal and Maria Baker for their generous donation of this historically significant portrait,” said Mary Platt, director of the Hilbert Museum. “It adds to our growing collection of works by Milford Zornes, and to our knowledge of his life and of the history in which he participated.” She added that the portrait will go on public display at a future date, possibly as part of a World War II-themed exhibition.

Women nurses, in small numbers, were stationed in Allied hospitals in Burma in 1943 and 1944, where they treated U.S. and Chinese troops pushing into China along the Burma and Ledo Roads. The roads were the sole lifeline for military supplies going to Chiang Kai-shek’s Chinese Nationalist Army, which was battling the Japanese. The nurses served under very trying and often dangerous military, cultural and climatological conditions in this extremely demanding theater of the war, where for every Allied soldier wounded, another 120 fell sick from malaria and other diseases.

“Milford Zornes served as an artist for the U.S. Army Air Force, along with fellow California artist Millard Sheets — in fact, they often painted together while in the India-Burma-China arena of the war,” said Hal Baker.  “Milford was with the Allied forces when the road was opened from India to China, and when the first convoy of war material went through, they stopped in Burma and had a celebration. Two Red Cross nurses were at that party; I’ve verified that. But we don’t know if this lady was one of them.”

Baker added that he’s checked with the American Red Cross and was told that the organization has no records of which nurses served in Burma during the Second World War. “If I could match her to a photograph, or anything, we’d have a clue,” he said.  “But right now there’s just no indication of who she might be.”

Red Cross and Army nurses performed courageous and vital tasks of care and healing in this important theater of WW II, often with very little recognition. The Hilbert Museum would love to restore this woman’s name to her portrait — and invites anyone who might have helpful information to share it by emailing the museum at hilbertmuseum@chapman.edu or calling 714-516-5880.