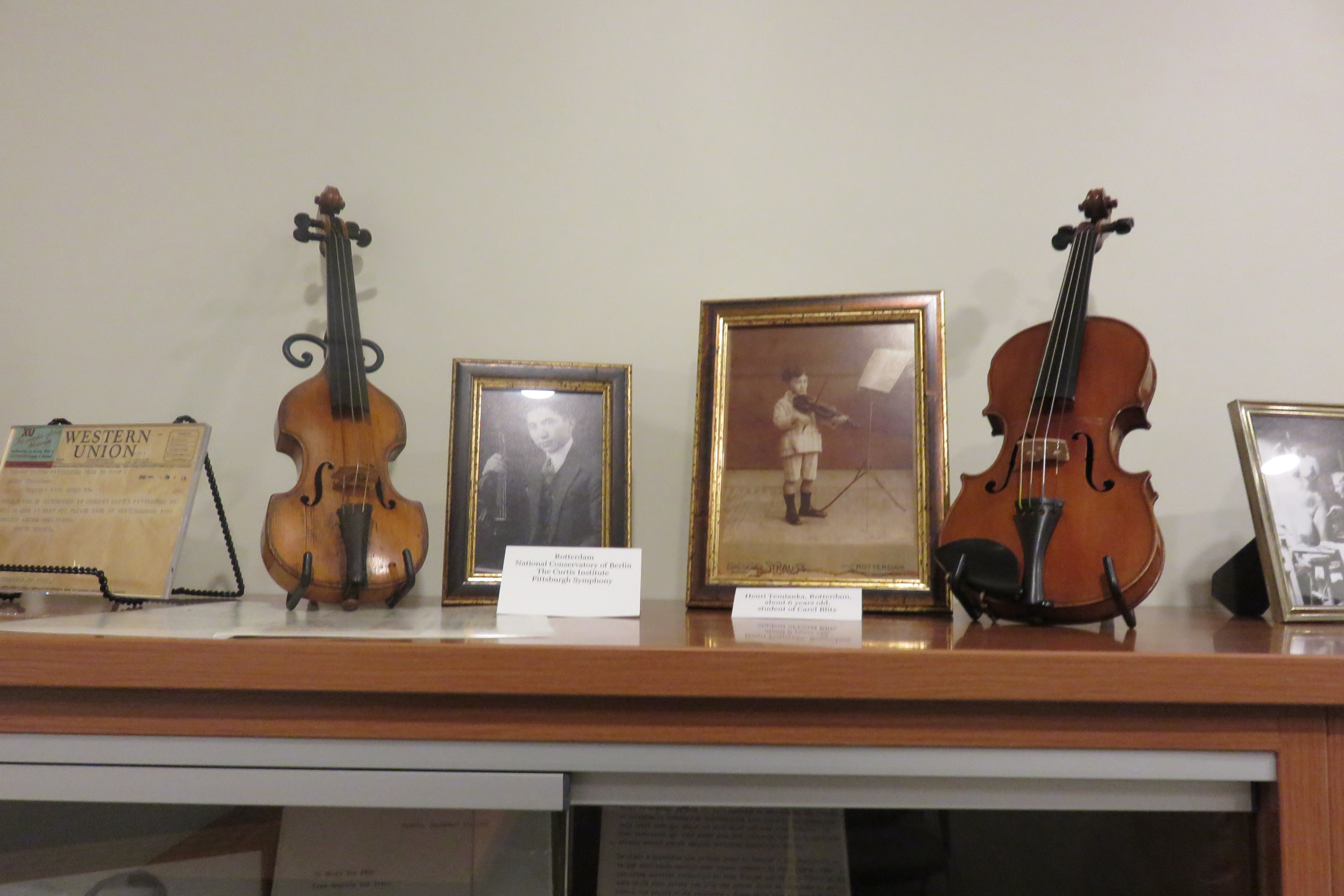 Violins and other memorabilia are on display in the Leatherby Libraries Henri Temianka Group Study Room.
Arts & FilmUncategorized

The performing arts have the power to draw us together, benefactor Daniel Temianka told the four current Temianka Violin Scholars at their year-end gathering May 13 in the Leatherby Libraries Henri Temianka Group Study Room.

“That’s the purpose of artists, to connect us, isn’t it? ” said Temianka, son of Henri Temianka, the virtuoso violinist, conductor and educator whose legacy is honored by the Temianka Professorship in Music and Scholarship in String Studies in Chapman University’s College of Performing Arts.

“All of the performing arts, especially, connect us so that we understand that we all have these feelings and we all share this aspiration for beauty, in one way or another,” Daniel Temianka said.

Scholarship recipients Arturo Balmaceda ’18, Eileen Kim ’19, Christopher Nelson ’20 and Risa “Lisa” Yoshida ’18 expressed their appreciation for the support that enables them to attend Chapman and performed for a group that also included William Fitzpatrick, the Temianka Endowed Professor of Music.

“Without the Temianka Scholarship, I would literally not be here,” said Yoshida, who said her family had been worried about the expense of attending Chapman before she was awarded the scholarship. Other benefits have included performing in the new Musco Center for the Arts, master classes with world-class professors such as Paul Kantor — the Sally Shepherd Perkins Professor of Violin at Rice University — and collaborating with the famous Kronos Quartet, Yoshida said.

“It’s just been a great journey so far,” she said.

Nelson had the additional honor of being the holder of the Henri Temianka-Albert Saparoff Violin this year, allowing him to play and practice on the special instrument daily.

Nelson said he is “very, very thankful” to have had the use of the Temianka-Saparoff Violin because it “has allowed me to explore a lot more than I previously was aware of, because it’s just such a fabulous instrument.”

“Receiving the scholarship also, I suppose, gave me more drive,” he said. “In high school, I would just practice and it wasn’t for anything. I guess I was kind of lost. But after auditioning at Chapman and finding out that I did receive the scholarship, it gave me more initiative and purpose.”

Kim said the scholarship was there at a fortunate time.

“For me, especially, this past year financially has been extremely difficult, because both of my parents are currently unemployed. So without the scholarship, I would not be where I am right now,” she said.

Though Kim began playing at 3 and performed in multiple orchestras and taught other students while still in high school, she said the scholarship convinced her music wasn’t just “a rite of passage” but something she always wants in her life.

Balmaceda spoke of the remarkable life of Henri Temianka, who in 1941, already a well-known musician, secured the release of his parents from a Nazi concentration camp.

“I just found myself to be really inspired and motivated by Temianka’s story, the story of how he saved his parents and went on to become a great music educator and spread that all over the world,” Balmaceda said.

The visit to Chapman inspires him too, Daniel Temianka said.

“This is the dream come true and the point is to have the legacy of great music and artistic expression continue to thrive,” he said.

Display image at top/Violins and other memorabilia are on display in the Leatherby Libraries Henri Temianka Group Study Room.