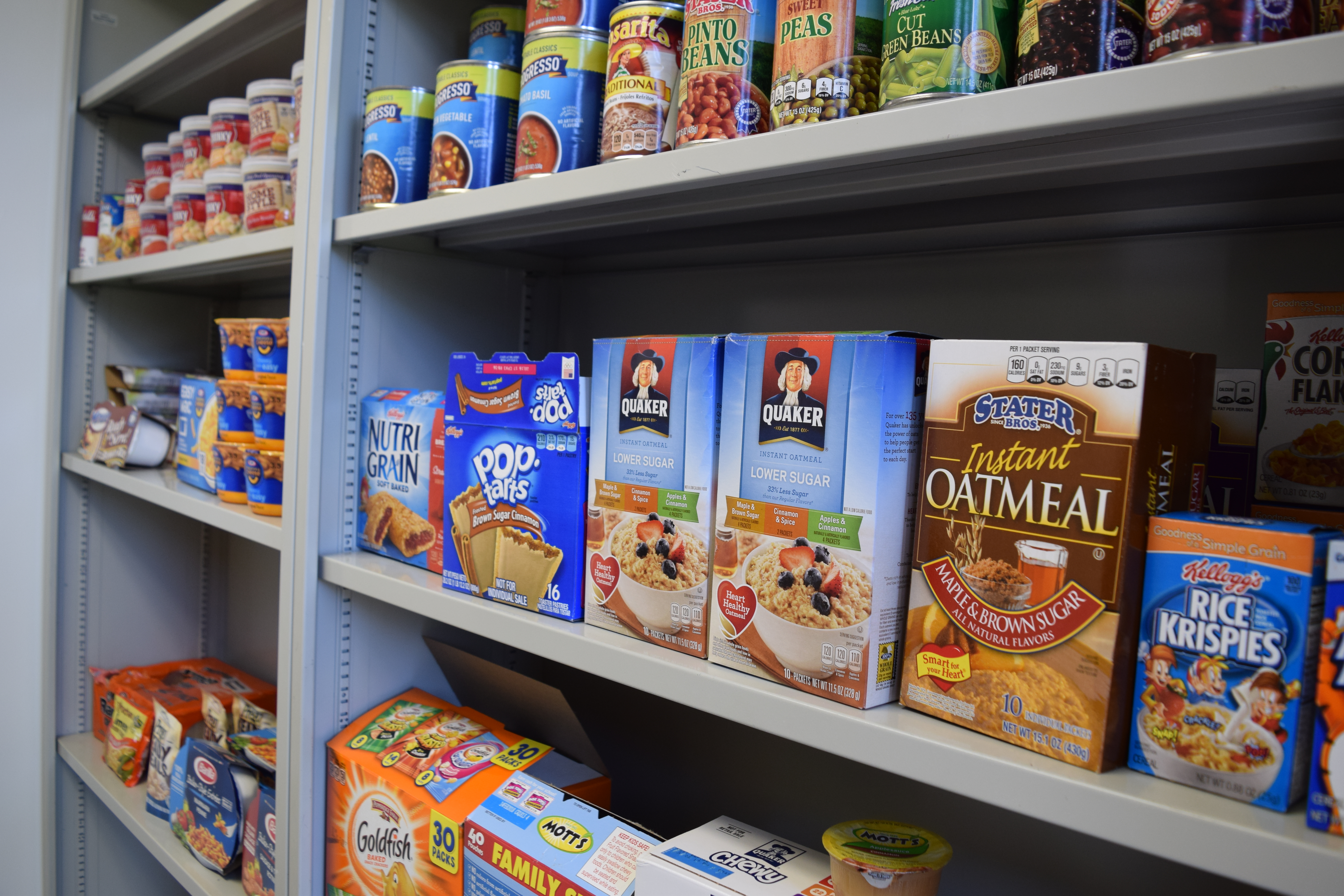 Hunger on campus is invisible, but it is there all the same.

Inside Chapman University’s Morlan Hall is a place students in need can go for extra food after seeking help from the Dean of Students or Office of Residence Life and First Year Experience. The secured food pantry is stocked with non-perishable items such as canned goods, pasta, cereal, granola bars and breakfast bars.

“Food pantry is what has gotten me through college,” said a student majoring in film production who asked that her name not be used. The daughter of a single parent who lives in another state, she is paying for school herself with the help of federal aid and loans in addition to working.

“There’s this idea that if you go to Chapman, you can afford basic needs like food, and that’s just not always true,” she said. “The past few semesters I’ve scheduled all 18 of my credits in two to three days of once-a-week classes so I can work the rest of the week, but the jobs I was able to get without transportation (and even with it) were at or close to minimum wage, which isn’t nearly enough to pay for books and supplies and toiletries and loans. Sometimes it’s a matter of prioritizing, ‘Am I getting my supplies this week, or food?'”

She will graduate this year. But when there wasn’t enough money to get her through the month or she didn’t have a car to get to a store and couldn’t afford to eat out, the food pantry kept her from the discomfort of hunger.

She is far from the only one.

“I see at least three students a week who say, ‘I haven’t eaten today,’ or ‘I can’t get to the grocery store,’” she said.

Awareness of what is called “food insecurity” on college campuses has grown, with a 2014 study by Feeding America reporting that 3 million U.S. college students lacked consistent access to nutritious food. Other studies estimated that close to four in 10 University of California students and one in four Cal State students struggle with food insecurity. Although the need appears less widespread at Chapman, administrators say food insecurity is growing rapidly.

“It doesn’t necessarily mean that you don’t have food. It means you don’t have enough regular access to food to keep you from going hungry, broadly speaking,” said Dave Sundby, director of residence life at Chapman. “Often, when people ask for the food bank, they’re supplementing. They can afford some food, but they can’t afford enough regularly to keep them full. And that’s problematic. When you’re hungry, it’s hard to focus on your work and studying.”

Extra help for students needing food has existed at Chapman for some time. About 20 students currently use the pantry regularly, and the program is growing along with needs. The space for food recently was expanded during remodeling at Morlan Hall, and vegetarian and vegan options are being added, said Sherri Maeda-Akau, associate director of residence life.

The reasons for the increasing need are unclear.

“For us, it could simply be enrollment growth,” said Jerry Price, vice president for student affairs and dean of students. “I don’t know if the percentage is going up, just that we get more students.”

The gap that remains after paying for tuition catches some students by surprise, and Price added that there are other financial issues students encounter beyond food.

“We have students who, I don’t know if they would consider themselves homeless, but they don’t have reliable places to live for periods of time. They may be couch-surfing or other things, because Orange County’s not an inexpensive place to live,” he said. “We have students who can’t afford to live on campus, so they commute from home, but commuting 20 to 30 miles each way eats up gas they can’t afford, so we try to help with gas money and things. And that kind of assistance doesn’t come from the University budget; that comes from people who donate to us to support students when they need it.”

Middle-class students can fall into that gap too, Sundby said.

“We have a lot of students who maybe even because they’re in that middle class, their family can make ends meet, but for them to come to Chapman is a real financial burden,” he said “They’re trying to make ends meet, and maybe they’re falling short, and that creates a gap.”

It’s a gap Chapman is working to fill.

“Even though there are a lot of assumptions because we are a private university, we still have student need,” Maeda-Akau said. “That drives us to have a program like this.”

Students in need of access to the food pantry should fill out this form to receive access. Please direct all food pantry questions to Annessa Garcia (angarcia@chapman.edu).