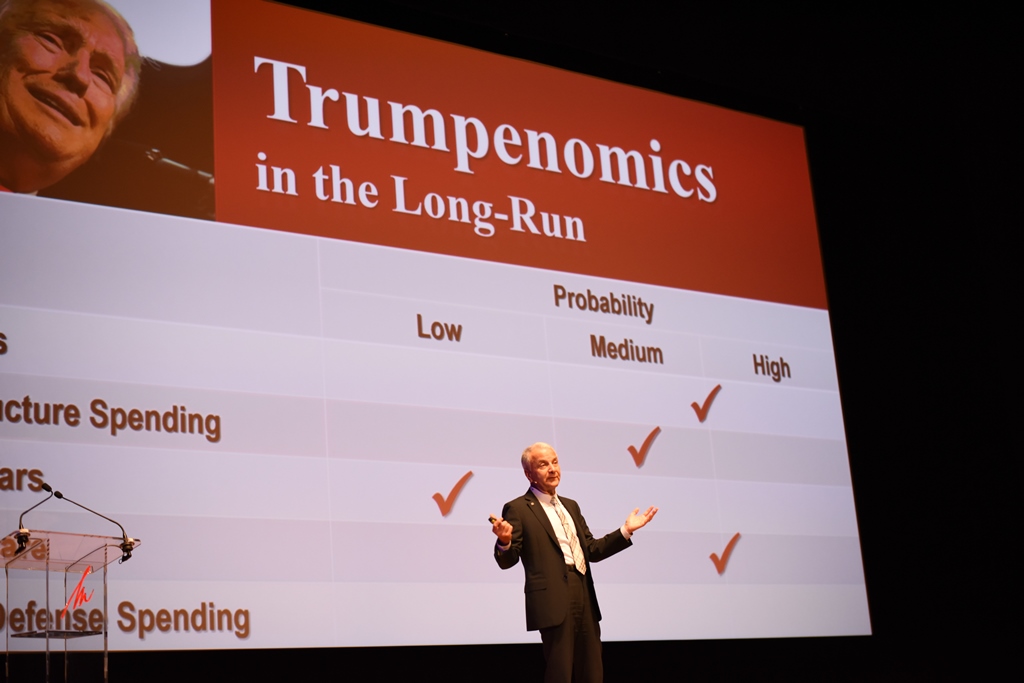 The new Trump administration will certainly change the economic picture for the U.S. But not as much as  the president-elect’s supporters or detractors may think, according to Chapman University President Emeritus Jim Doti.

Doti opened the 39th Annual Economic Forecast with a “Trumpenomics” prologue in which he predicted that the president-elect’s plans will be moderated.

“On trade wars, our rating of likelihood is very low, in spite of the vitriol regarding NAFTA and the Trans-Pacific Partnership. I really believe they are so interconnected to global trade, particularly NAFTA,” he said. “I think there will be some jawboning and maybe some things will have to be given back … but no major significant changes.”

However, the new administration likely will win corporate tax cuts and increased spending on defense and infrastructure, Doti said.

Overall, the forecast sees continued growth both in California and the U.S., with real GDP growing from 1.6 percent in 2016 to 2.4 percent in 2017.

The Chapman Econometric Model was inaugurated in 1978 as a faculty-student research project. Since that time, faculty and students of the George L. Argyros School of Business and Economics have maintained and regularly updated the model.

The forecast was presented in Musco Center for the Arts before an audience of nearly 1,000 business and community leaders. Following is a summary of the full presentation.

President-elect Trump’s campaign proposals will change our nation’s economic landscape. In the long-run, “Trumpenomics” is likely to bring about regulatory reform, tax cuts, increased spending on defense and infrastructure, and some sort of Obamacare “fix.” Trumpenomics in the short-run points to the reversal of executive orders, investment decisions being held back, loosened bank regulations and expectations of inflation.

With tax cuts and increased spending looming, the Federal Reserve Board is likely to be more resolute than ever about raising the federal funds rate, which is likely, in turn, to push up other short-term interest rates. If that were to narrow the difference between short- and long-term rates, it may be a warning of recession. Every recession has been preceded by the interest rate spread (the difference between the 10-year T-bond and the 90-day T-bill) falling below zero.

There is no reason to believe in the coming year that the interest rate spread will turn negative. Not only do these findings rule out a recessionary call, but we are forecasting that the recovery will pick up steam, with real GDP growth increasing from 1.6 percent in 2016 to 2.4 percent in 2017.

Since 2017, California has outperformed the nation in job growth. That is due, in large part, to the Silicon Valley’s disproportionately high growth in job numbers and wage/salary levels in the high-paying information services sector. But growth in those jobs has dropped back sharply since early last year, and a number of factors suggest a continuing downward spiral, albeit at a slower rate. This Silicon Valley slowdown will have a significant impact on the state’s overall economy.

Another factor expected to constrain job growth in California next year is a slowdown in construction, with total building permit valuation declining from a 4.1 percent growth rate in 2016 to 3.2 percent in 2017.

Our Chapman model suggests that these negative forces will be offset, in part, by stronger growth in real GDP and imports into California. While imports are subtracted from U.S. real GDP growth, they serve as a positive proxy for the extensive trade and distribution services in California. Barring any Trump-induced changes in trade pacts and tariffs, at least in 2017, the recent depreciation in exchange rate values points to a pickup in imports flowing through California from the state’s major markets, China, Mexico, Japan and Canada.

Overall, we are forecasting that Orange County will outperform both the state and the nation, with 2.5 percent job growth in 2017.

An area of concern for Orange County’s future is the continuing decline in housing affordability. This problem can be seen clearly in the ratio of median home price to median income. In 2016, Orange County’s ratio of 8.3 is extraordinarily high as compared with the U.S. ratio of 3.3 and even California’s ratio of 6.0. And given our forecasts for higher mortgage rates as well as housing appreciation near 6 percent in Orange County next year, we see this affordability gap widening in 2017.

Are current housing prices in the county in “bubble” territory? We believe so. We do not, however, expect that inflating bubble to burst in 2017. Even though mortgage rates are increasing, the tight supply of unsold housing, coupled with strong rental demand, will keep prices appreciating.

The Chapman Econometric Model was inaugurated in 1978 as a faculty-student research project. Since that time, through the A. Gary Anderson Center for Economic Research, faculty and students of the George L. Argyros School of Business and Economics have maintained and regularly updated the model and disseminated the results of their research to the business community.