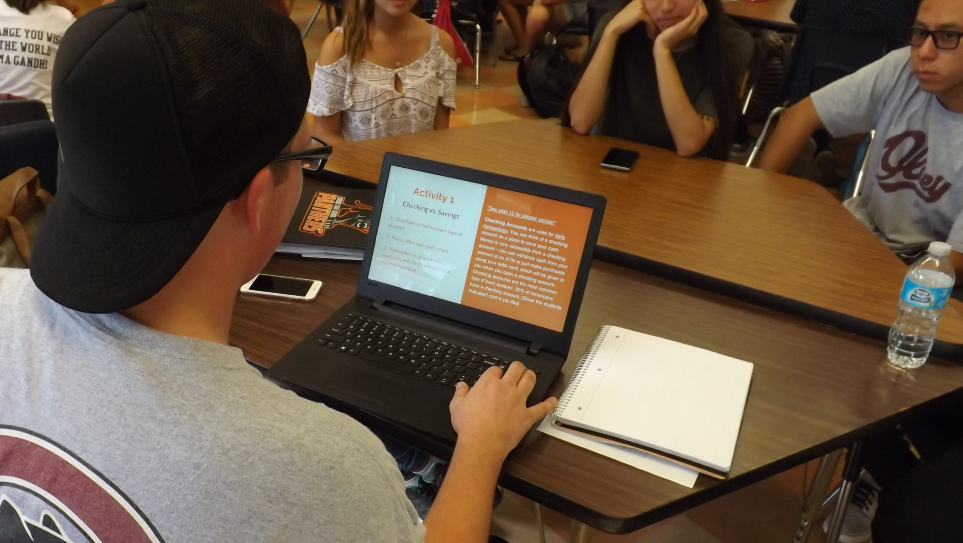 Seated around a small table with a handful of Orange High School students, Nick Sapp ’19 made a hypothetical offer.

Which would you rather have? A million dollars? Or one penny, with your investment doubled every day for 30 days?

Sapp is one of 24 members of Chapman University’s Moneythink club, part of a national organization that connects college volunteers with groups of high school students to provide the sort of practical financial education that often isn’t taught in schools. The Chapman group currently mentors some 100 students at OHS, teaching them things some adults might assume they know.

“In my experience, one thing is debit cards versus credit cards — a lot of them don’t know the difference,” says Annamarie Licina ’17, a business administration major and co-president of the Chapman Moneythink club with Alex Alexander ’19, another business major.

Life skills add up, too

The task of writing a resume is another topic the mentors address, and Licina demonstrated the process by displaying her own on a laptop. Alexander says he urges teens to recognize that even if they are applying for their first job, they might already have relevant experience such as babysitting and should include that. He even has helped students find a job, or begin to make college and career choices.

The benefits of teaching young students about different types of financial accounts, building credit, budgeting and job-seeking are broad.

“I find when we work with the students, it’s really a two-way mentoring program,” Alexander says. “A lot of students at Chapman and university students in general are not that financially literate either.”

Moneythink, a nonprofit, was founded by a group of University of Chicago students in 2009 in the wake of the U.S. housing collapse and financial crisis. Since then, it has expanded to 30 college campuses and was honored in 2012 as one of five Champions of Change in the White House Campus Challenge.

“I think one of the most important things I’ve learned is just the fact that it’s important to start saving right now,” she says. “I think what grabs our attention is when they tell us stories. I think an example was [a mentor] broke his computer and because he had savings, he was able to buy a new one.”

Power of the “near-peer”

That “near-peer” influence plays a major role, says OHS teacher Kelly Walthers, whose marketing class is one the Chapman volunteers visit. In some cases, a college freshman might be mentoring a high school senior, just a year younger.

“It’s fantastic,” Walthers said. “They hear it from me all the time. Here, they get it from a peer. In that respect, it’s invaluable. They look forward to it. They’ll say, ‘Oh yeah, it’s Moneythink today!’”