Chapman University received national distinction from the Federal Emergency Management Agency (FEMA) this month as a recipient of the 2016 Individual and Community Preparedness Awards. The University was named as an Honorable Mention in the category of Awareness to Action. Chapman received the award for its third annual
Survey of American Fears.


The fear of disasters
—be they natural or manmade—has ranked high among Americans in the University’s Fear Survey each year. In addressing these worries, the researchers not only convey the factors contributing to fears of disaster, but also take responsibility for sharing ways to mitigate them. FEMA has recognized Chapman for this call to action.

According to the 2016 Chapman University Survey of American Fears, more than half of all Americans (63 percent) believe that “natural disasters in my area are capable of doing serious harm to me or my property.” Additionally, the vast majority (78 percent) believe an emergency supply kit – such as a 72-hour kit recommended by FEMA – would improve their chances of surviving a disaster. Nevertheless, 74 percent have made no effort to put together such a kit.

“We found a major disconnect between people’s expectations of what would happen in a disaster and the reality of a disaster’s aftermath, said
Ann Gordon
, Ph.D., associate dean of Chapman’s Wilkinson College of Humanities and Social Sciences, and also the lead researcher on the disaster data from the university’s annual fear survey. “The number one excuse given by Americans is that they expect first responders to come to their aid. This is an unrealistic belief in the wake of a catastrophic disaster.”

“It is vitally important that people have enough water, food, and medicine to be on their own for at least 72 hours following a disaster,” continued Dr. Gordon. “Unfortunately, fear of natural disasters is widespread, but preparedness is not.” 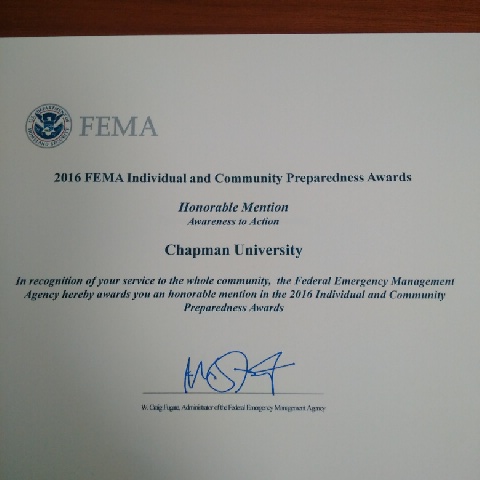 
According to the announcement from FEMA: “…the award recognizes the outstanding efforts of individuals, programs and organizations throughout the county working to prepare their communities for emergencies. These awards highlight innovative practices and campaigns that have made outstanding contributions toward making communities safer, better prepared and more resilient.”

Chapman was among more than 160 applicants representing local and state governments, the private sector, non-profits, community-based organizations, and individuals. More information can be found at:
https://www.ready.gov/citizen-corps/citizen-corps-awards 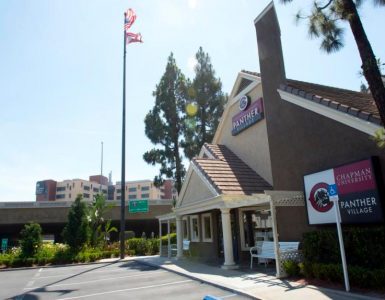