As a high school senior visiting Chapman for the first time, Santiago Villarreal ’19 remembers feeling “scared about a big change, scared of being myself.” Before he took the campus tour, he explored the Student Union, stopping when he came to a wall displaying poster-sized photos of smiling students. They looked strong and confident, Villarreal thought. Their posters shared declarations like “I am Filipino American” or “I am Christian.” Some statements struck him as fearless – “I am gay” or “I am a survivor of rape.” Each poster had the same bottom line: “I am Chapman.” Villarreal started feeling “like I’d be free to be who I am here,” he says. Now that he’s a sophomore, he co-curates the “I am Chapman” wall with colleague Juliana Nalbandian ’18.

What began as a two-week exhibit featuring a dozen students who happened to be on campus during summer 2014 is still growing in its third year of life. More than 100 students are now represented on posters, with the concept expanding to include alumni as well. “The idea is to convey that no matter what identities students have, they are welcome here,” says Michael Keyser, assistant director of the Student Union.

The exhibit is particularly popular in fall, when new students are still adapting to university life, Villarreal notes. He sees the project helping them the way it helped him. “You feel part of something bigger than Chapman as a university,” he says. “You’re part of a whole family of people.”

President Struppa has announced that all faculty and staff may leave early today, Nov. 27, at 3 p.M., to get started on holiday plans for Thanksgiving.  Please note that this early dismissal is at the discretion of... 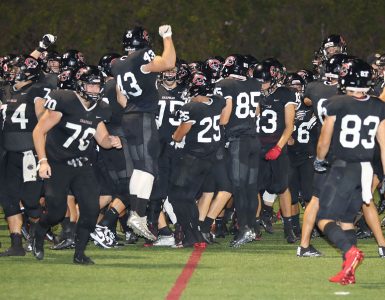 11/30 Chapman Football vs. St. John’s: Get Your Tickets For the Second Round Game

Tickets are now on sale for Chapman football’s second round game of the 2019 Division III football championship against Saint John’s (Minnesota). Kickoff is set for noon on Nov. 30 in Chapman Stadium. All...