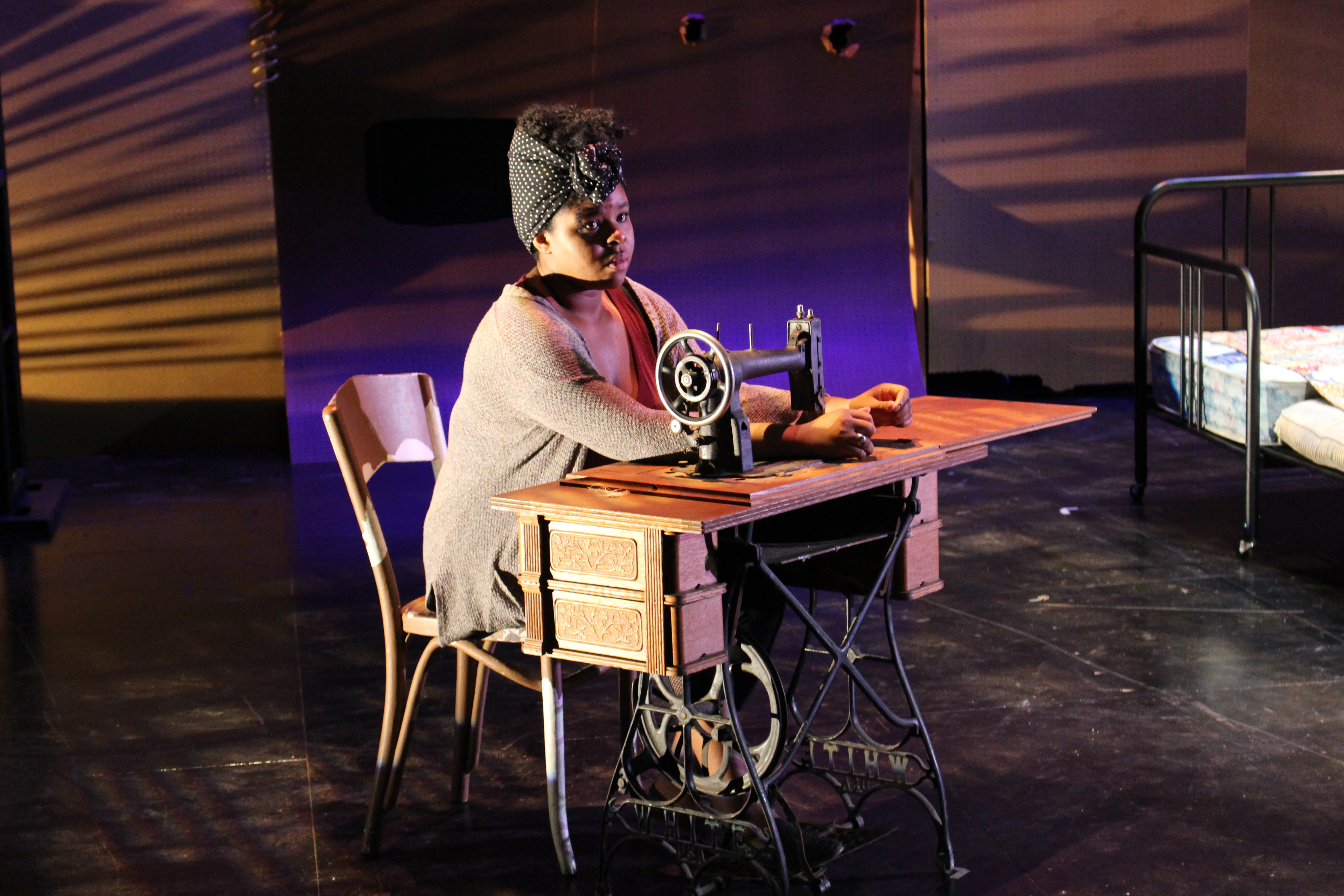 The smoothness of the finest white satin. The warm black skin of her husband. A stash of savings sewn into a hem. These are some of the things that Esther, an African-American seamstress filled with longing in playwright Lynn Nottage’s
Intimate Apparel,
can feel under her fingertips but is not meant to keep for her own.

Opening Thursday, Dec. 1, and continuing through Dec. 10 at Chapman University’s Waltmar Theatre, the play set in 1905 New York follows six characters as they navigate a changed world. Some, like Esther, are the descendants of slaves. Others are immigrants. One is privileged. The one thing they have in common is that the yearnings of their hearts go unfulfilled.

“This is a devastating play,” says visiting director Jaye Austin Williams, Ph.D., an assistant professor of theatre arts at Cal State Long Beach. “There’s a lot of terrible beauty in the play, a lot of compelling human complexity. And the play opens a space, which is what Nottage does all the time, to contemplate the implications of being human.”

The production marks the first time Chapman has staged the work of Nottage, an acclaimed playwright who has won not only a Pulitzer Prize for drama but also a MacArthur Foundation “genius grant” and a Guggenheim Fellowship. It also serves as a celebration of the publication earlier this year of
A Critical Companion to Lynn Nottage
, an anthology edited by
Jocelyn L. Buckner
, Ph.D., an assistant professor in
Chapman’s Department of Theatre
.

“My research is in representations of gender, race, class and sexuality in performance,” says Buckner, who was attending another of Nottage’s plays when she identified the lack of scholarship about the playwright’s works. “Lynn Nottage is one of the leading voices of American theatre today, and it is time to honor and celebrate her by expanding the critical conversation surrounding her contributions to the dramatic canon,” Buckner says.

“This is the first time we’ve produced her work at Chapman, and that’s in part because the department has really recommitted itself in the past five years to telling diverse stories. We have a growing diverse student population in the department, so we’re very excited to be able to tell a story in a way that we haven’t really before.” With four black characters, “this is not a play you could cast without African-American actors,” Buckner says.

Chelsea Davis ’17, a screen acting major who also has appeared in
Wash & Dry
and
RENT
, stars as Esther, a highly skilled but illiterate seamstress who for 18 years has lived in a boarding house hoping for a husband. All the while, she secretly tucks her mounting savings into the hem of a quilt with a dream of owning a beauty parlor for “colored ladies,” a place where they too would be pampered.

“She just has exquisite instincts,” Williams says of Davis. “She has a kind of stoicism and inner strength that I think absolutely is Esther to a T.”

Arianna Behrens ’20 and Regina Bryant ’20, two freshmen, adopt a world-weariness despite their youth to play Mayme, a prostitute who is Esther’s customer and friend but unwittingly crosses her, and Mrs. Dickson, the widowed owner of the boarding house. Jeremy Howard ’17 is Mr. Marks, an Orthodox Jewish fabric merchant with whom Esther feels a romantic but impossible connection. Rachel Gallagher ’19 is Mrs. Van Buren, a wealthy white woman struggling with infertility who buys the same pieces of intimate apparel Esther makes for Mayme but is indifferent to her absent husband. And Tommie Russell ’18 is George, the Barbadian immigrant who woos Esther sight unseen while digging the Panama Canal, a courtship reminiscent of Cyrano de Bergerac because neither would-be lover pens any of the letters themselves.

It is the figure of George, a young laborer with hopes of his own, who in some ways reminds us most that this is no simple period piece but one that resonates in the 21
st
century.

“He’s not some no-count brother who just messes up on his woman. It’s much uglier than that,” says Williams, who first met Nottage while working as an assistant director on the world premiere of the playwright’s
Crumbs From the Table of Joy
in 1995 and also contributed a chapter to Buckner’s book. “Their marriage starts to crumble under the press of her trying to stitch together a life for herself, to stitch together their piece of the ‘American Dream.’ The problem with this, as a lot of ethnographers and sociologists and other theorists discovered, is the pressures of the ‘American Dream.’

“You see it in the modern moment, like in the late 20
th
and 21
st
century. They did a study where they saw all these young black couples, they would go through these rituals. Young girl’s pregnant, they would start going through the ritual of buying these baby things. Then shortly thereafter, the young black men would bounce out of that relationship. Not because they didn’t enjoy or love the person, but because they were under the press of a set of structures they didn’t have the capacity to maintain. Like, ‘I can’t be a head of household. I can’t get a job.’ And that’s the predicament that George has in 1905.”


Display image at top/Chelsea Davis ’17 as Esther during recent rehearsal for
Intimate Apparel
.