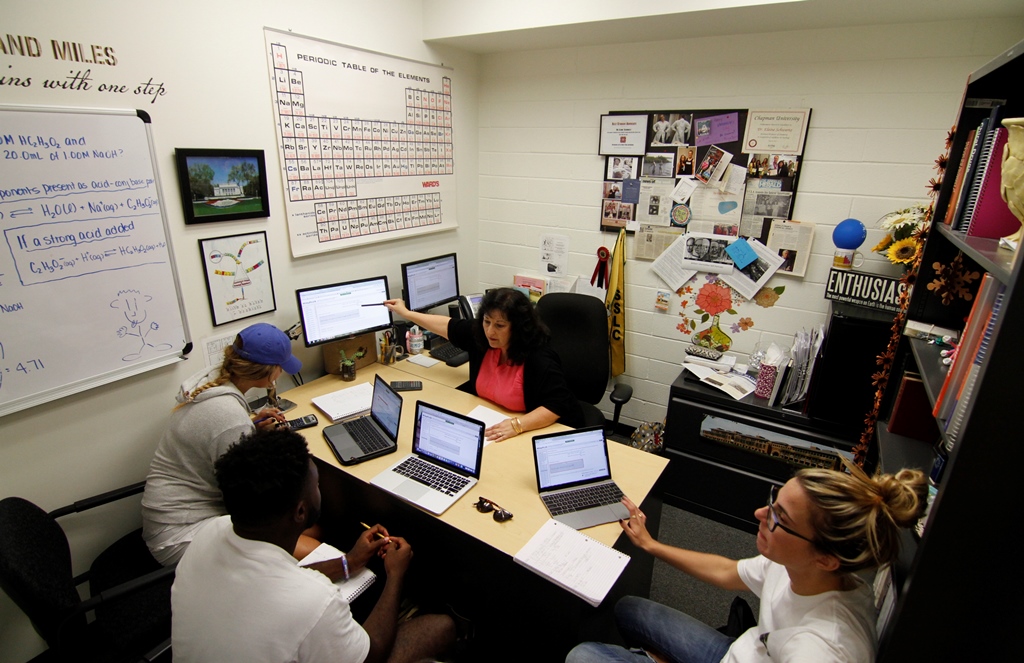 Five things the smart student should know about office hours

They’re listed on the syllabus and sometimes posted outside the professor’s door.

Office hours are required for professors – six hours a week for Chapman University faculty teaching a full course load – but visiting is optional for students. Those hours are hardly just for students who are struggling, though: Many professors say it’s often their best students who come see them. And figuring out how to use that extra access can maximize the opportunities Chapman offers that a giant university with large lecture classes and office hours staffed by teaching assistants might not. 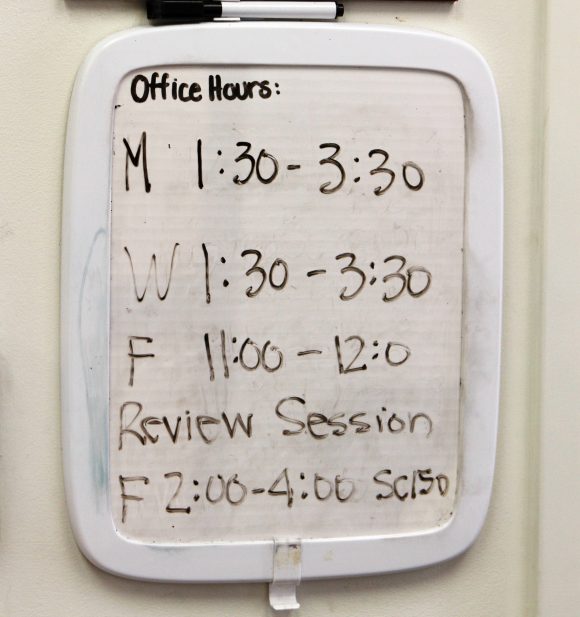 “When my students come to office hours, we often spend most of the time talking about their goals and where they would like to go and what they want to accomplish, and then we kind of map out a strategy for how to get there,” says Ann Gordon, Ph.D., an associate professor of political science and associate dean of the Wilkinson College of Arts, Humanities, and Social Sciences.

“Office hours are an important part of personalized education. There’s nothing more personalized than talking one-on-one, working on research with a professor or talking about your future with a professor,” says Gordon, who is one of the faculty researchers for the Chapman University Survey of American Fears.

Here’s a student’s guide for getting the most out of office hours.

Go early, or book ahead

Midterms and finals can be like rush hour for office hours, so go before then if you can. Also remember to go early in the time slot, or schedule your visit in advance so you don’t end up still sitting in the hall when office hours are over.

“I know one of the frustrations I had as a student myself was arriving at the university an hour before class or even two hours before class, only to find a faculty member who had a line out the whole hallway,” says
Roxanne Greitz Miller, Ed. D., who holds the Donna Ford Attallah Endowed Professorship in Teacher Education and serves as the Director of the Institute for Excellence in Teaching and Learning in the Office of the Provost. “I would wait in the line and either wouldn’t get seen or by the time I was seen I had a class starting in five minutes.”

To prevent that, Miller and some other professors use booking systems like calendly.com
that sync with Google and Outlook calendars and help schedule students’ visits precisely and eliminate long waits and email tag. Also, don’t assume the posted office hours are the only office hours: If you have a valid conflict, most professors will work with you. Some, like
Andrea Molle, Ph.D., an assistant professor of political science, even Skype during office hours if there’s a reason you can’t meet in person.

Office hours can be the gateway to things that will make your resume or graduate school application stand out.

“Any time a professor mentions research that they’re conducting, it’s a great opportunity for the student, especially if they’re interested in the topic, to come to office hours for a follow-up and say, ‘I want to hear more about that topic you mentioned in class,’” Gordon says. “I’ll often mention research I’m involved in. I’ll say, ‘I’m working on the Fear Survey.’ And students who are interested in that might come by and say how they would like to be involved in it. And then we find places for them to get involved, work on a survey.”

It’s OK to drop by to chat, but it’s best to have a specific purpose or questions. Use the time to work on something that can’t be accomplished in class or by email. Questions about projects are a good example, says
Dan Pavelin
, an assistant professor who teaches sound design in the Dodge College of Film and Media Arts.

“They want me to watch their film, or they have a technical glitch with their project and they’re not sure what’s causing it. Those are really good things to do in office hours, because I can’t really diagnose by email or phone on a technical issue,” Pavelin says. “If I can do it in person, I solve it and then explain to them what I did and then you don’t have to go through three or four possible scenarios. We can just go right to it.”

There also are certain fields and courses that have a steep learning curve, particularly for freshmen.
Elaine Benaksas Schwartz
, Ph.D., an associate professor of chemistry, often uses office hours for homework help.

“After they’ve gotten to know me a little better, they come in with homework questions and work homework with me,” she says, and sometimes works with three or four students at a time. By listening to each other and sometimes explaining parts of the problem to each other, the students learn together.

“What shouldn’t happen in office hours is an expectation that they’re going to come in real quick to get an answer to a homework problem without expecting to work through it and understand the entire concept,” Schwartz says.

Sometimes the discussion continues via technology.

“I’ll have them take a screen shot of their work, email it to me so I can see where they’ve progressed and where they got stuck,” Schwartz says. “I’ll send back an email that says, ‘Here’s the concept you should be focusing on,’ or ‘Have you thought about this?’ I don’t give them the right answer. I help with the progress in sorting it out.”

By the way, try not to beg

Professors are not sitting in their offices eagerly awaiting excuses, extension requests and other business of the dog-ate-my-homework variety.

“Honestly, when they beg for favors, I don’t think that’s what office hours are for,” Molle says.

All students are under stress and have conflicting demands on their time. If you ask for leniency, be sure your reasons are truly valid and avoid such situations by resisting the temptation to procrastinate in the first place. Some things can’t be done in a day.

“If they started the project too late, then, yeah, my office hours are not going to coincide with the night before a project is due,” Pavelin says. “But if they started in timely fashion and they encounter these problems at a mid-point or something like that, then there’s time to give them advice or time to implement that advice or give them four different possible ways to do it and then they pick the way they like best.”

Be sure your first visit to a professor’s office hours isn’t to ask for a recommendation.

“It would be too late if it were at the point where they’re asking for reference letters,” Miller says.

A professor who doesn’t know you personally can’t write a good letter, even if they’re willing to try.

“I get requests from students to write a letter of recommendation for law school, grad school or a job, and it’s it really hard to write a letter for someone you’ve seen or interacted with only in class,” Molle says. “If they’ve been coming in to talk, and I get to know them, I write a better letter, not out of a template.”

Lay the groundwork for a great letter by doing the things that make it easy for the professor to write one.

“By the time students are asking me for a graduate recommendation, I’ve known them for years and I’ve been involved with their research projects and I’ve seen them develop as scholars, so I have a lot more to describe in my letter,” Gordon says.