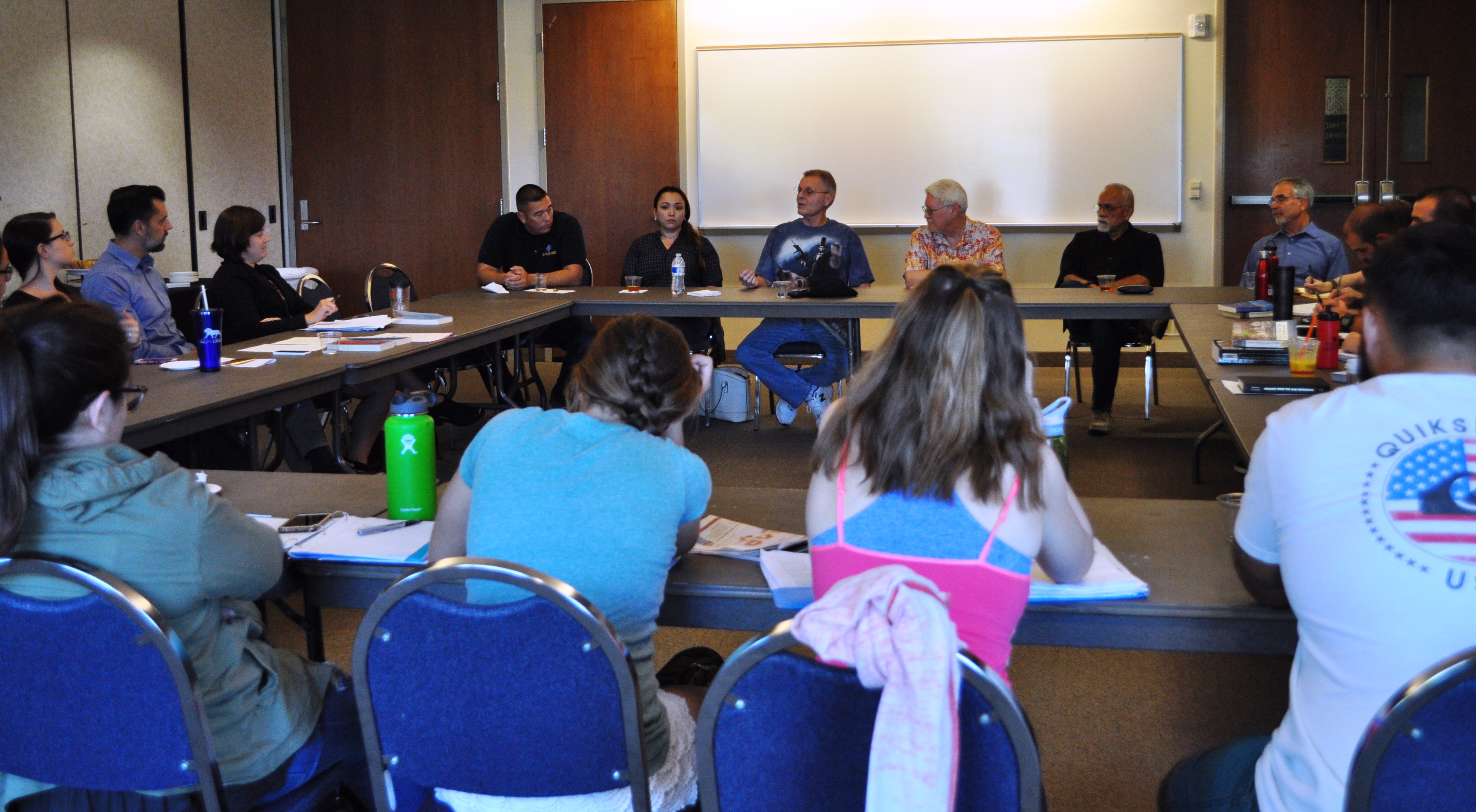 Veterans reflect on the challenges of coming home

Course catalogs can’t list everything you want to know about the classroom experience. So come looky-loo with us in Class Act, a feature that takes readers into the classroom. This month we visit Historical Approaches to War and Society.

The Vietnam War is textbook material for the graduate students in history 500, Historical Approaches to War and Society. The students enrolled in the course taught in Chapman University’s new War and Society program are all too young to remember that conflict.

But for U.S. Army veteran Bill Little, one of several veterans who spoke to the class recently, the war’s legacy lingers, coloring his daily life.

“I have post-traumatic-stress disorder, two prostate cancers from Agent Orange. I had a gunshot to the neck and some other things. And I relive it every day of my life,” Little told the students. “History – all those events – has passed me. But all the trauma still lives inside me.”

Little, a retired teacher, wasn’t alone in his story of haunting memories and injuries. The panel included veterans from both the Iraq and Vietnam wars who shared similar stories in the discussion led by Gregory Daddis, Ph.D., associate professor and a retired Army colonel who left teaching at the U.S. Military Academy to launch the Chapman program this fall.

The discussion focused on the challenges of reintegrating into society after war’s conclusion, a problem studied by the class and explored in two of its texts – Karl Marlantes’s What It Is Like to Go to War and Soldier from the War Returning: The Greatest Generation’s Troubled Homecoming from World War II by Thomas Childers.

“When you do come out of the other side you have something most people never experienced,” said Chris Merkle, a retired Marine. “The transition to military life is hard, and then coming back and trying to be in civil society is even harder.”

Although counseling programs to help with reintegration are improving, there’s room for progress, said April Delgadillo-Jolley, who is nearing retirement from the U.S. Army. She is now a marriage and family therapist intern at the North Orange County Vet Center
. Over the course of her 19-year career, Delgadillo-Jolley served in many capacities, including in undercover operations that required her to enter enemy territory disguised and unarmed. She described some early reintegration efforts that involved sitting in a circle with chaplains and therapists who asked soldiers to “tell me what you’re feeling.”

“Keep in mind that your boss is sitting right across from you,” she said, laughing. “I think they were well-intended, but they were still just kind of getting a feel for ‘What do we do? How do we do this?’”

“We really got to see the similarities and differences between each individual’s service. Vets who had recently retired gave a lot of credit to the Vietnam veterans in the room and felt that many of the post-service opportunities they had were in large part due to those who came before them. This was something I had never thought about,” Gibson said.

Such discussions are important because most of the U.S. population is disconnected from the military experiences and veteran needs that result from foreign policy decisions, said Vietnam veteran Daniel Jetté, a retired employee and workplace intervention analyst who now volunteers with veterans’ programs.

“Today, it’s almost this superficial ‘Thank you for your service’ thing, and then there’s usually kind of crickets because you don’t know what the hell to say after that, and both you and the veterans want to be able to talk about what’s going on here,” he said.

Jetté feels so strongly about the topic that he contacted Mark Maier, Ph.D., associate professor and director of Chapman’s leadership program, to arrange for the panel to visit the class, which was joined for the day by 10 students from the Peace Studies course Terrorism and War in the Media, taught by Lisa Leitz, Ph.D., assistant professor.

“Today less than 1 percent of the entire population of the country serves in the military. So there’s a real separation,” Jetté said. “I’ve had a long need to start opening the conversation between veterans and everybody else. We have a real divide, and what I would love to see is for that divide to shrink.”

Have a Class Act suggestion? Please email your ideas to bonker@chapman.edu