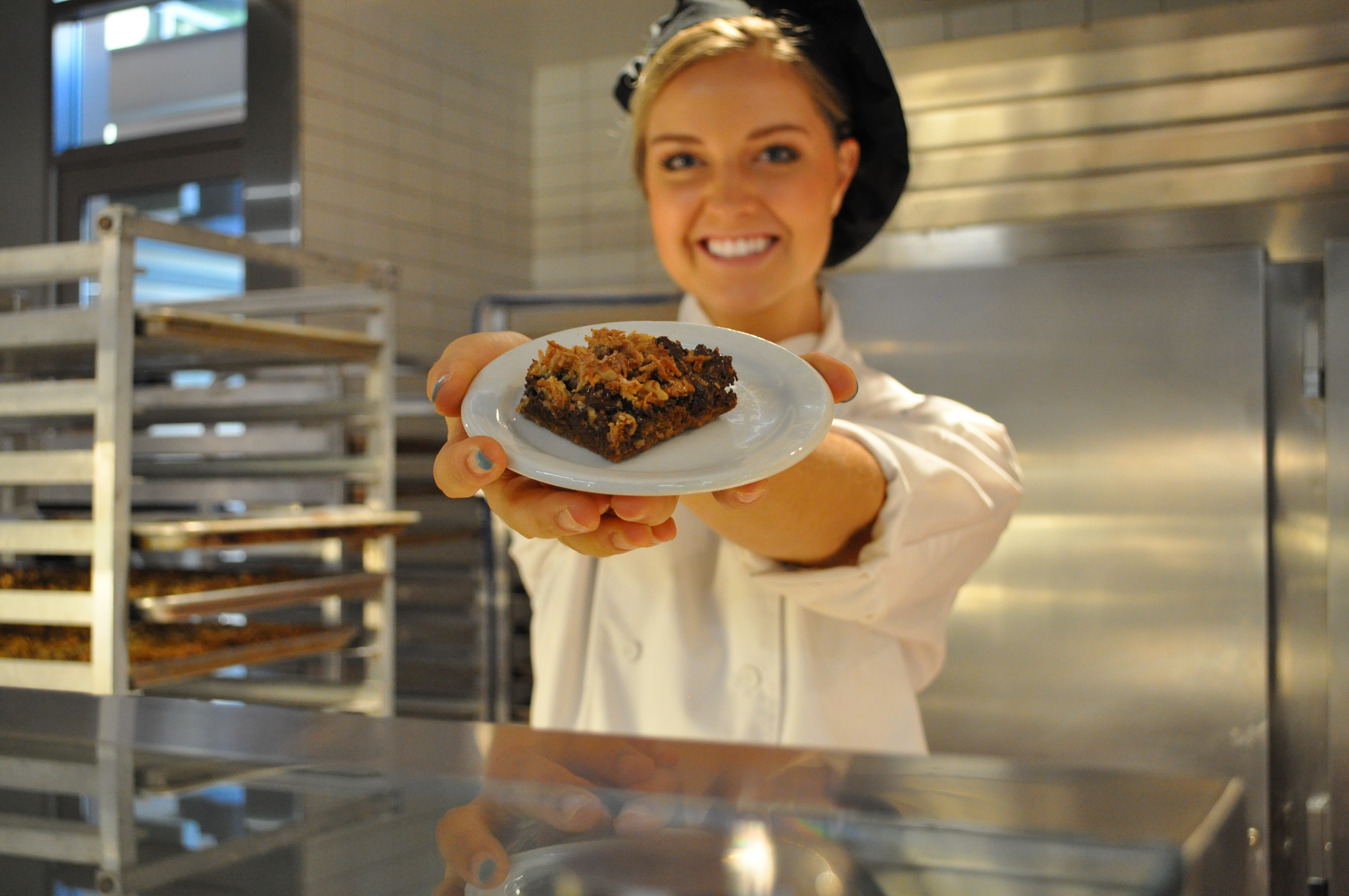 Baking up a career plan At Chapman, Nicole Renard '17 finds the creative ingredients to start her future in food show entertainment.

Most days in the campus dining hall kitchen are great for Nicole Renard ’17. But sometimes things go wrong. Like the time she dropped four cups of bourbon all over herself as she caramelized apples, smelling like alcohol for the rest of the day.

But little setbacks like that don’t stop Renard. The 2013 Distinguished Young Woman of America and broadcast television major has big dreams and cooking adventures are just one part of it. Someday she hopes to star in her own cooking show where she would travel around the world, learning about the culture, traditions, and cuisine from the locals, and collaborating with someone to make a dish reflecting that unique combination.

For the moment, though, the lucky beneficiaries of her culinary creativity are the student diners at Chapman University’s Randall Dining Commons.

An avid baker, Renard brought her cooking zeal along with her when she enrolled at Chapman. Oftentimes, that meant a bounty of sweets. When this happened, she would give them to friends or Karen Matias, one of the Randall Dining Commons employees. After tasting Renard’s baking a few times, Matias asked Renard if she would like to bake for the cafeteria. After an interview with the executive chef, Renard became a student employee baker.

Since then she has baked dessert specials twice a week.

“It was an unexpected blessing. It was something I never sought out or dreamed of, but it has affected me more than anything else at Chapman,” she said.

And she works beyond the kitchen, personally staffing the cafeteria’s dessert station every Thursday.

“I like to be out there for at least an hour serving desserts to the students,” she says. “I can ask them how their day is.”

She has made an impression on both the students and her fellow cafeteria employees.

“When I first met Nicole in the bakery, I thought, wow what a beautiful young woman who loves to bake. After meeting her, she shared with me her love for baking and the joy it brings her to see the students enjoy her special treats,” says catering manager Deanna Durigon.

During her freshman and sophomore years, Renard began posting the recipes on her blog so that students could make them at home. Occasionally she would make videos to accompany them, but the concept of a baking show did not coalesce for her until the winter break of her junior year. Over that stretch she began to make more videos. Now she posts a Feel Good Friday recipe each week on her blog, called Do Stuff.

All that experience pays off when something unexpected occurs in the kitchen. Another mishap like the bourbon incident happened when the pan that she was using to make a funfetti cake was not flat enough, causing the cake to fall apart when she tried to roll it up. Instead of throwing it out, she quickly mashed it with some frosting and turned the result into around 500 cake pops. Suffice it to say the dining hall had more sweets than expected, but her quick thinking salvaged the cake.

More often than not, though, her recipes are successes that the students love. One of her favorites is
Magic Cookie Bars. Thanks to student demand the Magic Cookie Bars are a Thursday tradition.

Only after all of these elements came together did Renard realize what she ultimately hopes to do. Interviewing people from the journalism side of her major, producing the show from the television side, and making the delicious dishes from her time working in the cafeteria all come together to form the concept of the traveling cooking show.

“I feel a call to feed people around the world,” she says.

While the idea took shape recently, she says it has been with her for a while.

“I have a dream journal, like an extended bucket list. I like it because the higher your bar the more room you have to do things. In middle school, before I even knew it would be a reality, I wrote down the show idea, and I think it’s funny how God works in the little things. I can see how every little thing in my life has worked to make this dream a reality.”

In the spring she will apply for internships and possibly even culinary school. But for now she’s happy that she has been able to foster her love of baking by making them delicious sweets, greeting them with a smile, and asking how they have been.

Display image at top/Renard displays one of her Magic Cookie Bars.

You can read more about Rendard and see her recipes on Youtube or her her blog Do Stuff.