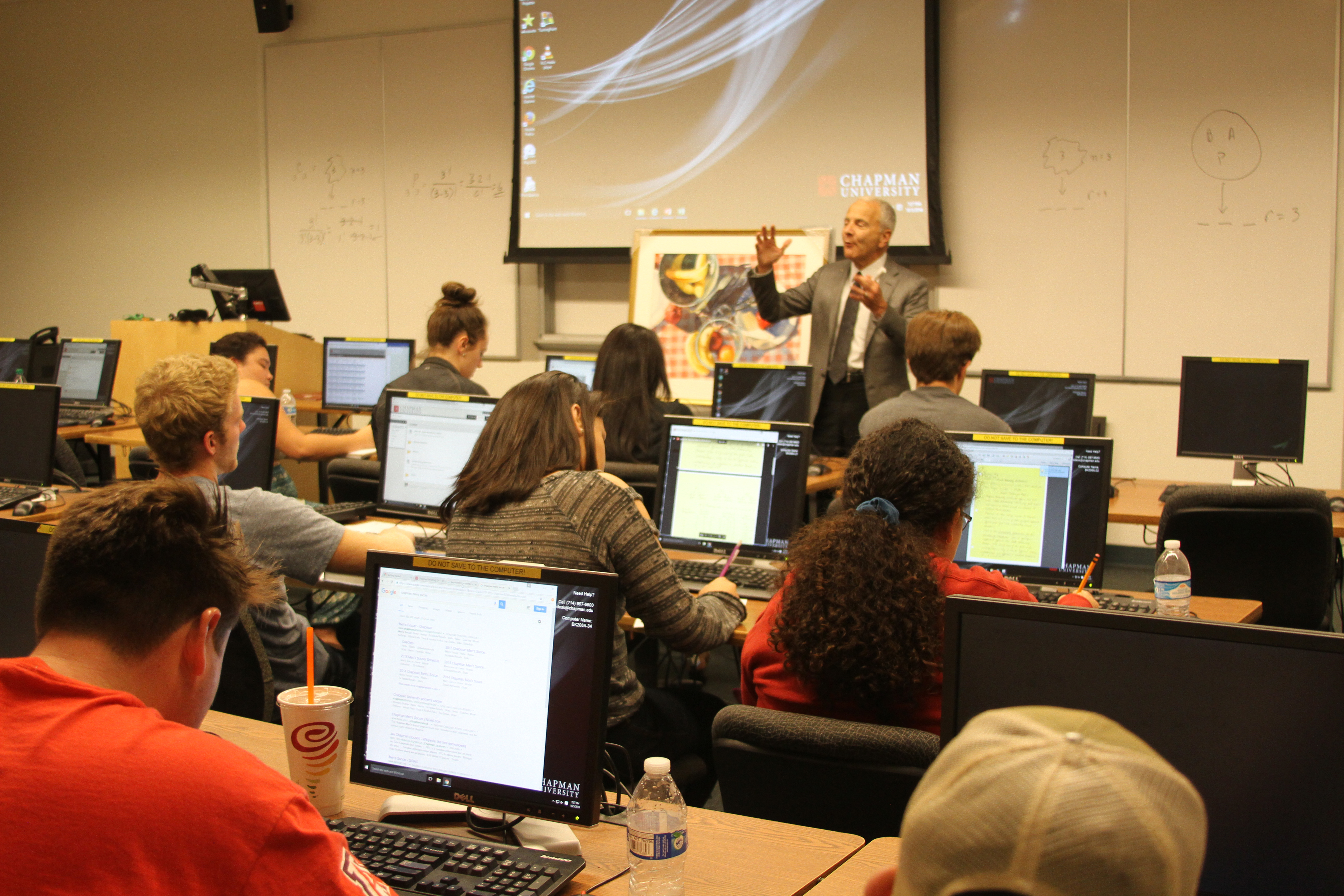 President Emeritus Jim Doti, settling into his new/old position as a professor in the Argyros School of Business and Economics, continues to cross-pollinate academic disciplines as he innovates elements of education.  For one of his Introductory Business Statistics (MGSC 209) evening classes in early October, he borrowed two paintings by Orange County-based artist George James (1932 – ) from the collection of Chapman’s
Hilbert Museum of California Art
to illustrate some common principles of statistics.

In James’s “Caveman Bowl,” a Photorealist painting from 1972, Doti pointed to the grouping of five different vehicles, plus an empty parking space, in front of the bowling alley depicted in the work. “So – six different things in front of the bowling alley: one space and five different cars and trucks.  My question to you is: how many different ways could the artist have arranged these cars and the space?  And is this a permutation or a combination?”  The students debated and offered a few answers, but through statistical magic (er, we mean, the Doti formula) the correct solution emerged: the artist could have rearranged those vehicles plus the space 720 different ways, and the grouping was a “permutation” (in which order plays a role).

Next up was “Still Life” (c. 1982) by James, depicting three bananas in one bowl and a variety of fruits in another bowl, set upon a red-checkered table cloth. This was a more complex problem, since one bowl held three-of-a-kind and the other a diverse selection.  Doti offered a short art-historical tour of the painting, discussing the artist’s “Superrealist” period and his shift from landscapes to still life. The students determined that order, in the case of the bananas, wasn’t important because the objects were all the same, so the items made up a “combination.”  But for the mixed fruit, the grouping was, again, a permutation.

At the end of this artsy demonstration, Doti offered his class a little something extra: they’ll  get three extra-credit points for visiting the Hilbert Museum, finding a painting that reminds them of something they’ve studied in statistics, and reporting on it.

Now there’s a great example of breaking down the barriers between science and art! Come visit the Hilbert Museum and see if it works into your class plans — or just come by to relax and enjoy some beautiful paintings of our Golden State. It’s just a shuttle-bus ride away (on the Parking Lots bus) or a nice walk, across from Ruby’s Diner at 167 N. Atchison Street, near the train station. The Hilbert is open 11 a.m. to 5 p.m. Tuesday-Saturday, and admission is always free.  (Closed Sundays and Mondays.)
Argyros School of Business and Economics Art George James Hilbert Museum Hilbert Museum of California Art Jim Doti management science statistics