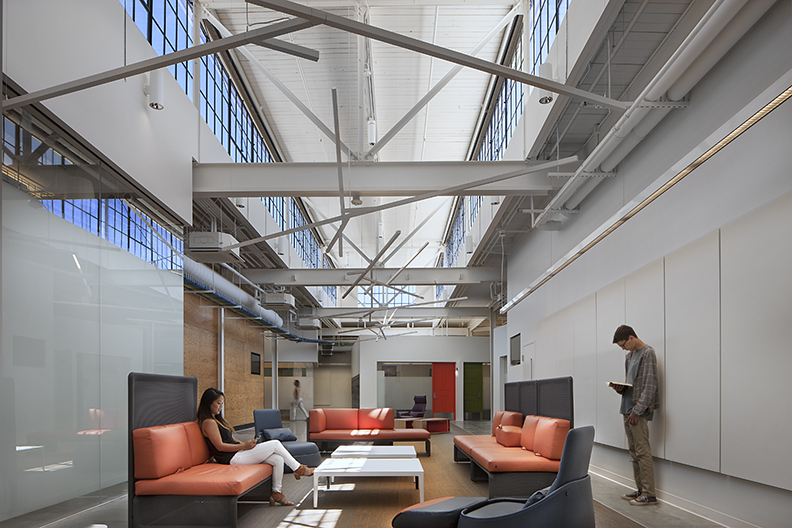 Chapman University’s Digital Media Arts Center, a historic building transformed into a unique teaching space, has been named a recipient of a 2016 California Preservation Foundation award. The prestigious awards are given each year by the foundation to recognize California’s top examples of design excellence and historic preservation.

The Digital Media Arts Center – known on campus as “the DMAC,” will be honored in the restoration category. A former manufacturing plant for California Wire and Cable Co., the DMAC underwent a complete renewal in 2014 under the direction of AC Martin Partners.

Key to the re-purposing was the merging of the building’s industrial character with its new life as a high-tech center for digital storytellers at Chapman’s Dodge College of Film and Media Arts, said Kris Eric Olsen, vice president of Campus Planning and Operations.

“By adapting this historic structure it preserves the embodied energy that went into the manufacture of the original materials and assembling them on-site. No one has ever expressed it better than President Teddy Roosevelt, who said, ‘Do what you can, with what you have, where you have it,’” Olsen said.

Among the distinct elements of the design was the restoration of the original brick façade, and the renovation of both the clerestory windows and the interior cross-strut beams. Housed inside are state-of-the art studios, classrooms, a screening theater, motion capture stage and walls whose surfaces are designed to be doodled on.

An open-air patio flanked by a parking structure and a half basketball court were also part of the overall re-purposing of the site, located in the industrial area of the Old Towne Orange Historic District.

The foundation award will be presented in September. It is the third architectural honor for the DMAC and AC Martin Partners. The American Institute of Architects Long Beach/South Bay Chapter honored the building with a Citation Award in the Historic Preservation Category. The institute’s Orange County Chapter awarded a Citation Award in the Commercial Built Category.

The awards are the latest honors to acknowledge Chapman’s preservation activities as it adapts historic buildings on its campus. In 2015 the Spirit of Old Towne Award was awarded to Chapman for the makeover of the former Mennonite Pilgrim Church at 145 W. Sycamore. In 2014 the Orange Barrio Historical Society and Chapman received the Orange Public Library Foundation’s Legacy Award for their collaborative work in preserving the historic Cypress Street Schoolhouse, which once served as a segregated “Mexican school.”