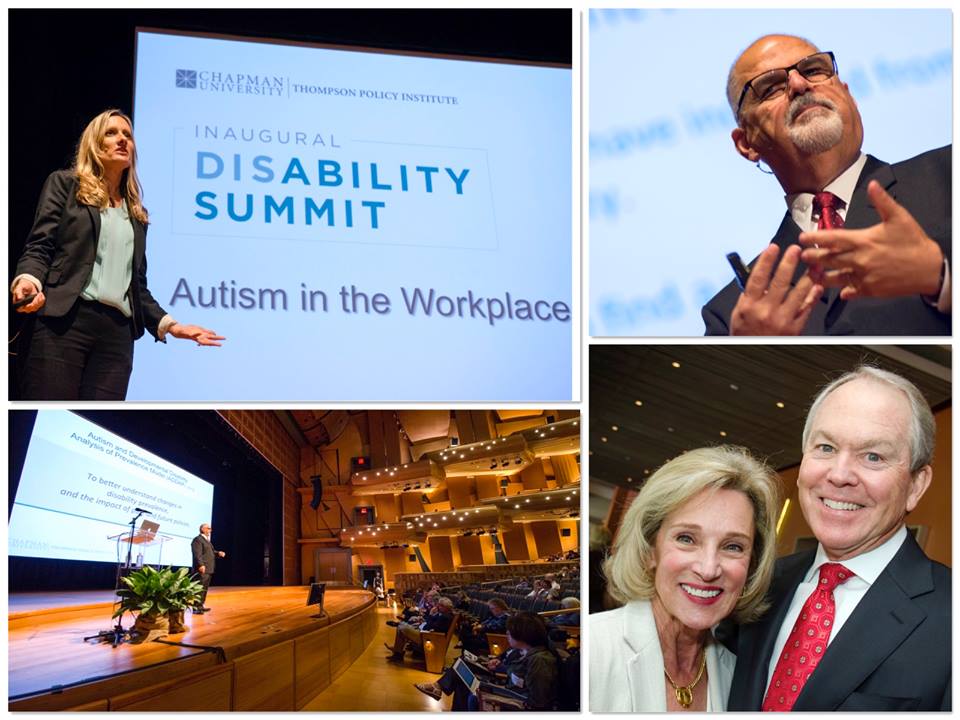 During their recent DisAbility Summit, held at Chapman University’s Musco Center for the Arts, which drew hundreds of educators, health professionals, parents and policy-makers — and in their many media interviews since then — researchers at Chapman’s Thompson Policy Institute (TPI) for Disability and Autism have put forth some new numbers that are getting people talking.

The autism community (parents and families, educators, health workers, fund-raisers) — famously polarized due to ongoing claims and theories about what exactly causes autism and what’s behind the current dramatic increase in autism diagnoses (environmental or man-made factors, better or worse methods of diagnosing,  etc.) — now has a new set of data to ponder.  In California and OC alone, there has been a jump in autism diagnoses from 2 to 12.5 percent of children statewide in special education since 2000, and from 2.5 to almost 19 percent in Orange County.

The Chapman experts attribute the sharp increase in autism diagnoses to what they call “diagnostic migration” — that is, it can be statistically explained by the fact that children who receive an autism diagnosis today would still have been eligible for special education in earlier years, but within a different category, called Specific Learning Disabilities (SLD) – a category assigned to children who don’t have an intellectual impairment but who perform below expectations academically.  Autism diagnoses have clearly increased while SLD eligibility has decreased correspondingly, the experts say.  They also argue that almost all new cases of “Other Health Impaired” (OHI)  – a category which includes ADHD and has grown almost as fast as autism — can be attributed to the same factor.

“All children and youth in California special education are assigned to a primary category — a label, if you will,” said Don Cardinal, Ph.D., lead investigator for the TPI. “While the total special education enrollment across all categories has remained constant when considering general population growth, the number of children in some categories has decreased and others, such as autism, have increased. Only one category — Specific Learning Disabilities (SLD) has substantially decreased, by 64,842 kids since 2000.  But two categories have substantially increased during that time: autism has increased by 76,755 — over six times the number in 2000; and OHI has increased by 55,603 kids, over four times the number of 15 years ago. We believe it’s accurate to say that the increase in OHI is actually an increase in ADHD.

“When we tested these data in a mathematical model, we found that the diagnostic migration (movement within disability categories) strongly explains the alarming increase in the autism rate among children in California, and likely the nation,” Dr. Cardinal concluded. “Due to California’s demographics, large size, and the extremely large size of the TPI sample — some 700,000 children per year — we believe these results are compelling enough to be tested on data from other states, toward being able to generalize the findings nationally.”

The policy implications from this study, say Dr. Cardinal and TPI co-investigator Dr. Amy Jane Griffiths, are wide-ranging. “In schools, if we properly align our policies and procedures to this new information, children will reap the rewards of a more specific and personalized education plan,” said Dr. Griffiths. “In the adult life of those identified with autism, understanding what policies need to be developed or changed to create better supports for young and mature adults is an immediate need — and TPI’s initial work on Autism in the Workplace is a starting place.”

The full report issued at the DisAbility Summit by the TPI researchers can be found here.

Chapman Happenings coverage of the founding of TPI, Oct. 5, 2015.

Dr. Griffiths was featured on KPCC’s Air Talk with Larry Mantle, May 11, 2016

Orange County Register, May 3, 2016: Spike in autism caused by a shift in diagnosis, Chapman study says