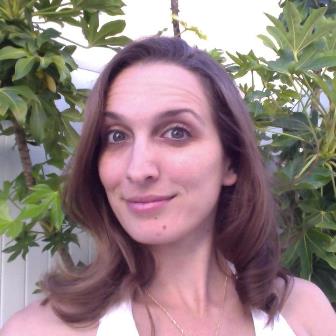 Julia Walton, one of two winners of this year’s James L. Doti Outstanding Graduate Student Awards, has something in common with 20th century poet Wallace Stevens.

Like Stevens, Walton (MFA ’16) kept a flame of creativity burning while working in the insurance industry, mired in a world of claims, deductibles and coverage limits.

But unlike Stevens, who held to his job as an insurance executive even after winning a Pulitzer Prize, Walton left her job at a Newport Beach insurance brokerage after seven years to write fiction and earn a degree in creative writing at Chapman.

The risk she took paid off. Walton’s first book, the young-adult novel Words on Bathroom Walls, will be published by Random House in Spring 2017. Random House also purchased the rights to a second book Walton is writing.

“I made a lot of great friends, but I have no love for insurance. After a while, I was stuck in a job I really hated,” said Walton, who toiled as a customer service representative. “I always wanted to write, but I don’t think I was brave enough yet to do what I wanted to do.”

Finally, she made a decision.

“You can’t make it as a writer unless you get used to rejection,” she said.  “I decided I wanted to go back to school because I wanted to be around people who also wanted to write. The more you surround yourself with things you love, the more they start to come to you.”

By the time Walton started classes at Chapman, the first draft of the novel that will be published next year was almost complete. Told from the perspective of a teenage boy with schizophrenia, the story unfolds in the form of letters to his therapist.

“The story is deeply personal to me not because I have direct experience with schizophrenia but because I know what it is like to be lost in myself,” Walton said “The struggle to find truth in a confusing life is something that everyone can relate to, and my goal as a writer is to reach someone with this story, to make them feel a little less alone.”

Honing her skills at Chapman

At Chapman, Walton’s submissions in class included work she hopes will be the basis of her second published novel.

“It’s a little like learning how to take a punch from friends before you have to go out into the world,” she said. “Their criticism, they don’t sugarcoat it if they don’t like something you’ve written, but they definitely do it in a very supportive way.”

James P. Blaylock, the director of the University’s creative writing programs and himself a novelist, praised Walton’s work and emphasized how few submissions are selected for publication by a major publishing house.

“Her success is an inspiration … absolute evidence that talent, hard work and perseverance can ultimately pay off for the aspiring writer,” Blaylock wrote in nominating Walton for the Doti Award.

Walton and Dr. Ahmed Younis, who earned a Ph.D. in education with an emphasis in leadership studies, each receive a $1,000 award and a copy of the sculpture “Emergence” by Nick Hernandez that is featured on the Doti Award trophy on perpetual exhibit in Argyros Forum.

Walton, the married mother of an 8-month-old girl, also has written an interactive children’s book, “ Lucy Grace: ROTTEN,” and is a contributor to
Nanoism, an online publication for Twitter-fiction, as well as a writer for Kayu Media. (Follow her on Twitter
@JWaltonWrites.)

“I’m so happy with everything going on in my life,” she said. “I feel so incredibly blessed to be able to write and be able to be home with my daughter, and on top of that be able to go to school with such talented individuals.”