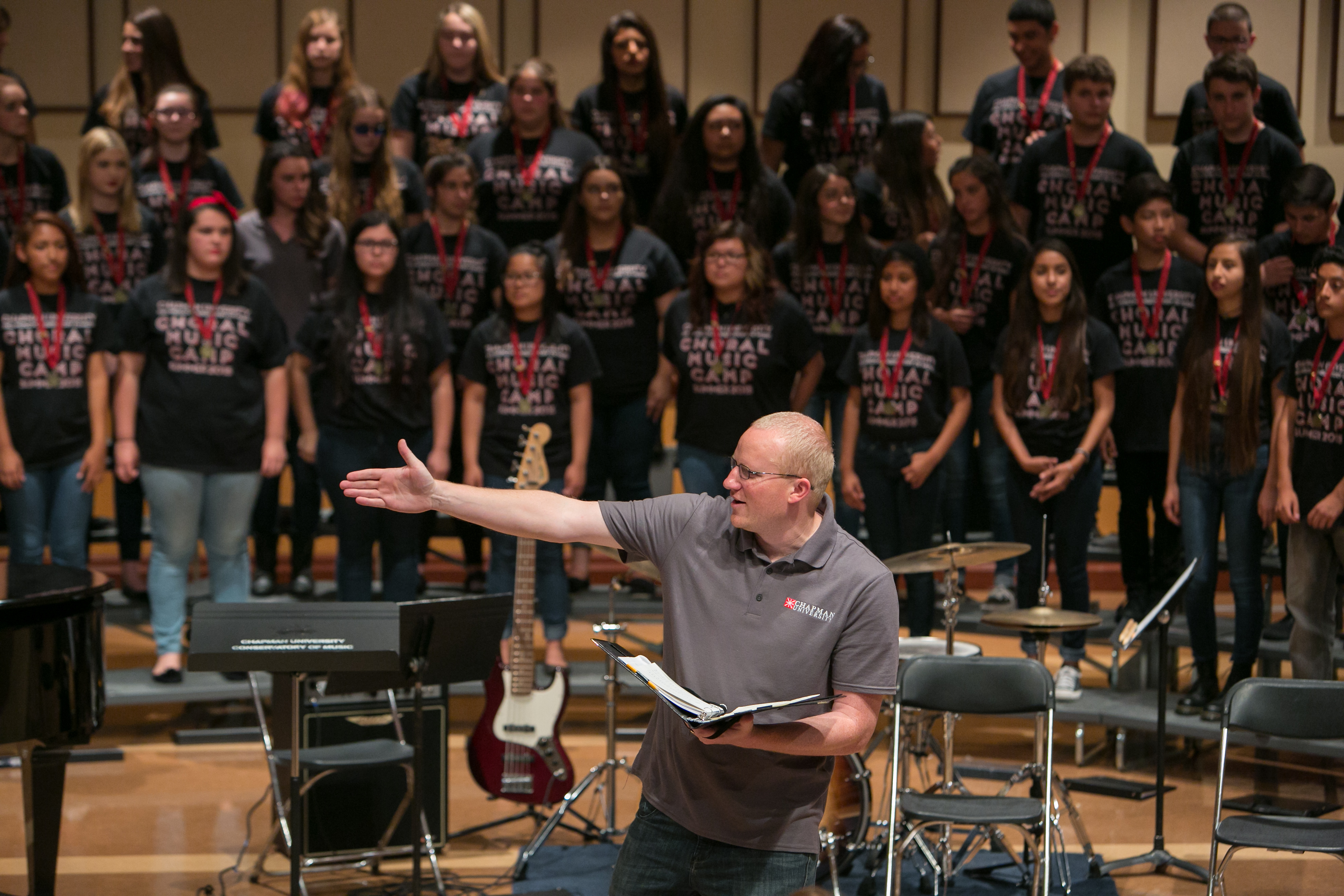 It was lunchtime on the Tesoro High School campus in South Orange County, but students still stood around the piano, waiting to sing some more.

Seated at the keyboard was Tesoro choral music director Keith Hancock ’02 (MA ’04), who will direct the Chapman Choral Music Camp
for high school singers in June after being honored this year as one of 10 national finalists for the 2016 Grammy Music Educator Award.

Hancock already had led Tesoro’s Madrigals choir through an up-tempo 1 1/2-hour rehearsal that included U2’s “Beautiful Day,” an arrangement of “Sweet Caroline” from Glee, a selection from the musical Rent, an a cappella rendition of “Run to You” by the Pentatonix and the more classical “Prayer” by prominent American composer Morten Lauridsen. But dozens of students stayed in the room after the bell, picking up guitars or asking Hancock for one-on-one coaching for upcoming pop solo auditions.

Dressed in an untucked plaid shirt and casual pants, Hancock displayed a manner that is at once low-key and precise, serious and fun.

But when the students began to laugh and joke at the kitschy drama of “Sweet Caroline” — “Hands … touching hands … reaching out … touching me … touching you” – he was right there with them.

“That exciting part,” he said to laughter.

Hancock’s mentor at Chapman, William Hall, DMA, the founding dean and artistic director for Musco Center for the Arts, calls Hancock one of the most talented conductors Chapman has produced in the more than five decades Hall has been at the University.

“Over the years, I’ve watched young conductors, men and women who have that spark of leadership along with having the ears musically,” Hall said. “I’d say we’ve had thousands graduate, and we have had five, six or seven the caliber of Keith Hancock. He has an amazing ability to bring out the best in students, and always bona fide musicality.”

What: A day camp for high school singers

Where: Hall-Musco Conservatory of Music

“The connection and the atmosphere, the vibe on a high school campus, it’s very different,” said Hancock, who previously has taught college courses at Chapman and last year directed the high school camp with Stephen Coker, DMA, associate professor and director of choral activities, also the camp’s conductor.

They certainly have at Tesoro.

When Hancock arrived in 2002, there were only about 35 students participating in choir. Now there are 200, and last year Tesoro’s music program was honored as one of five national Grammy Signature Schools, earning a $2,500 award spent in part on sheet music and equipment.

Tesoro choirs have toured in Europe and performed at Carnegie Hall, and in 2012 and 2016 performed at American Choral Directors Conventions, an honor Hancock considers their highest. (See the video of Tesoro’s exuberant
2012 ACDA performance.)

And Hancock hasn’t had his last shot at a Grammy Music Educator Award. He is in the competition for the 2017 award, which comes with a $10,000 honorarium and, even bigger to Hancock, an opportunity to attend the 2017 Grammy Awards. In addition, Tesoro was selected as a semifinalist for the Signature Schools competition.

His other honors include being named the Secondary Vocal Music Teacher of the Year by the Orange County Department of Education in 2012. He also is the music director at Compass Bible Church in Aliso Viejo, a professional portrait and wedding photographer and a married father of two.

How does he do it all?

“I can survive on five hours of sleep and still be functional every day,” Hancock said with a laugh.