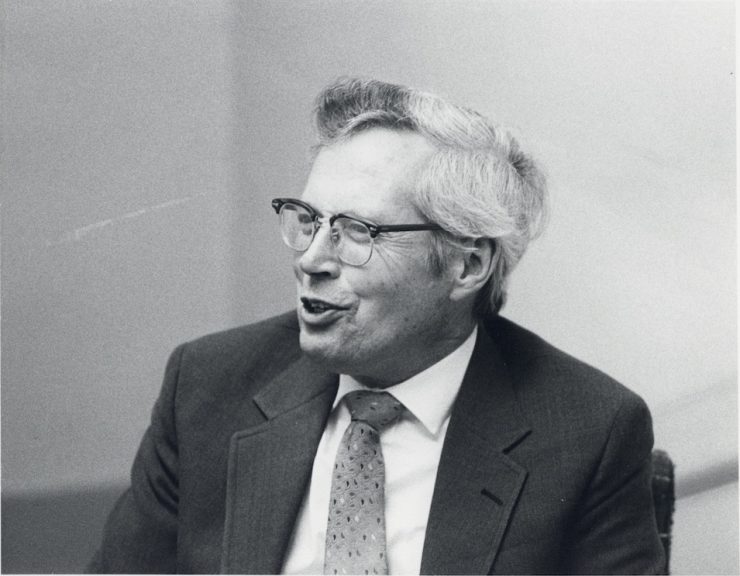 A Remembrance By William Cumiford ’63, Ph.D., associate professor of history

About a decade ago one of my advisees, Laura, a history major, dropped by my office for a chat just days before her May graduation. She spoke very excitedly about securing her credential and entering the public schools. Not long into our conversation she mentioned that one of her favorite professors, Jim Miller, played a key role in helping her decide on a teaching career. This did not surprise me, because I had heard numerous students make such comments over the previous 10 years I had taught at Chapman. Laura further remarked that she was taking Professor Miller the last time he was teaching his fabled course on the American West, and she was quite surprised that I was in the course the very first time he offered the class in spring 1962.

In fact, Jim had been teaching at Chapman for five years before I arrived on campus as a junior transfer student in 1961. In addition to his myriad assignments in seven different departments at Chapman, Jim taught night school for many years in San Pedro and in the federal prison at nearby Terminal Island. He was the consummate work horse who genuinely loved every second in the classroom.

It was quite sad for those of us in the Department of History to see Jim’s health decline over the past two years. The spring in that familiar step, bounding across campus, was a sight that all of us missed. Jim, aside from being a former Marine, was a true American patriot in every sense of the word. It makes me smile to think how appropriate it was that he passed on Veterans Day.

Just as with Laura and generations of other students, Jim had an enormous impact on my formative years of undergraduate education. He had a unique and endearing way of making history come alive, and I, along with so many others, sensed that history was a vital, living thing under Jim’s tutelage and patient mentoring. He and other master teachers at Chapman inspired me to enter the university teaching profession, for which I am eternally grateful.

We have lost a Chapman Legend, but we can be thankful that Professor Jim Miller is now safe in the arms of his beloved “Mama.”

James C. Miller, professor emeritus at Chapman University and longtime inspiration to generations of students, passed away Nov. 11. He was 88.

Known as “Killer Miller” to countless classes because of his high expectations for his students, and for his homespun “Things Mama Said” maxims, Miller taught at Chapman for 47 years.

Born in Collinsville, Texas, Miller was the last of eight children and the first in his family to attend college. He was a veteran of the U.S. Coast Guard and Marine Corps, serving during World War II and the Korean War.

At Chapman, Miller was known for his immense enthusiasm for teaching. He would enter his classes at a fast lope, as if he couldn’t wait to teach. He was the first to credit his love for life to his deep religious faith.

“He represents the best of the teaching profession,” said Ambassador George L. Argyros ’59, a student of Miller, during a huge gathering at Chapman when the professor retired in 2003. “He’s always positive and has a great sense of humor.”

On the occasion of his retirement, the Jim Miller Parking Structure was dedicated and an endowed Chapman scholarship was established in his name.

Miller was preceded in death by his wife, Barbara. He is survived by sons Gregg and Reade, as well as grandchildren Alicia, Richard, James and Emma.

Chapman University is planning a celebration of Miller’s life during the spring semester. The family requests that those wishing to honor Miller make a donation to Cal Farley’s Boys’ Ranch in Amarillo, Texas – a favorite charity of the professor.