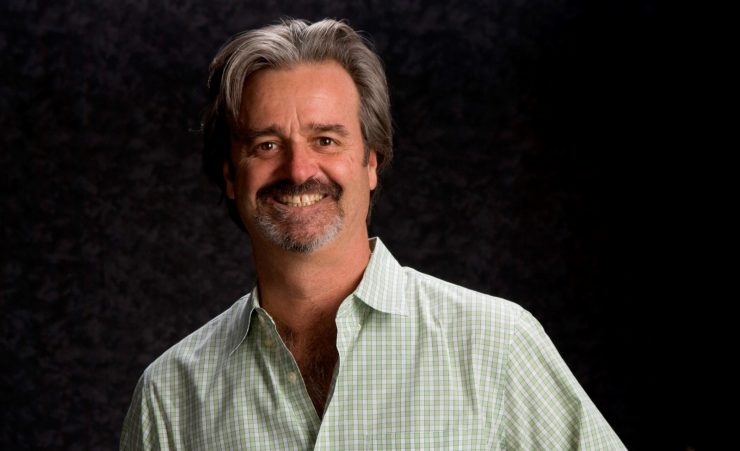 A Remembrance by Ashley Beall ’07

I believe I was meant to begin at Chapman the same year Cory O’Connor began teaching at the University in 2003. I believe in fate and luck, and so did he.

Coming from Texas, I was in a whole new world and ready to make my mark. My first advertising class was taught by a wild-haired man named Professor O’Connor. He seemed unconventional, and I liked that. I excelled in his classes and requested him as my advisor. We just clicked. He might say it was because we were both Irish.

In his classes, he used the course book as a guide, but life lessons, real experiences and case studies were more relevant, as many of us learned when we joined Chapman’s team in the National Student Advertising Competition, which was a passion for Cory. We lived and breathed that project, and Cory watched us push ourselves and our creativity. He expected dedication from us, and we learned to expect it from ourselves, too.

We also ramped up the Chapman Ad Club in those first years together. He encouraged me to run for president my senior year, which was probably the time I was closest with Cory. I once showed up four minutes late to an Ad Club board meeting and he kicked me out and canceled the meeting. I begged him to let us meet, but he refused. And I’m glad. That was one of the most important lessons I learned from him – people’s time is valuable, and as the leader you must be on time.

Some of my favorite times were sitting in an oversized chair across from Cory in his dimly lit office at Dodge College. It felt like a strange mix of talking to your teacher, consulting with a father figure, and some kind of weird therapy. I can still see him looking at me (somewhat seriously) over the brim of his glasses, and then throwing his head back in an unexpected bellow of laughter. It was in that office that he coached me to go into advertising sales, a career I hadn’t considered. And now I am the director of ad sales for TRIBEZA Magazine in Austin, Texas. He truly helped me realize my dreams.

He also made me feel special, as he did a lot of his students. He saw our potential and helped us see it for ourselves. He had so much faith in me that he nominated me for the Spirit of Chapman award — and I ended up winning. I never would have dreamed that for myself.

Being a part of his initial freshman class, I felt like a first-born child. After I graduated, we kept in touch, and he continued to be supportive. He was like family to me and others.

I can’t help but reference the book Tuesdays with Morrie. I always considered my experiences with him “Tuesday’s with Cory.” He will be dearly missed, but he leaves a legacy at Chapman that will live on for many, many years.

Beloved by students and alumni who remember him as the “soul of the Chapman community” and “slightly mad but definitely a genius,” Professor Cory O’Connor passed away Dec. 28. He was 59.

“The many remarkable tributes on Facebook are testament to Cory’s impact,” said Chapman University Chancellor Daniele Struppa. “Time and again, his students remark on his positive attitude and his unwavering support and encouragement.”

An assistant professor of advertising and public relations, O’Connor came to Chapman in 2003 with a Harvard MBA and a wide background in the entertainment industry, including executive positions with the Walt Disney Co. and the American Film Institute.

Under his direction, Chapman teams consistently excelled in the National Student Advertising Competition, winning a national championship in 2010.

Tributes by students and alumni flowed during a memorial service for O’Connor held Jan. 16 in the Wallace All Faiths Chapel. In addition, shortly before O’Connor went on permanent disability in October, faculty and students of Dodge College of Film and Media Arts celebrated his life and work with a tribute in Folino Theater. In his honor, room 206 in Marion Knott Studios was named the Cory O’Connor Classroom.