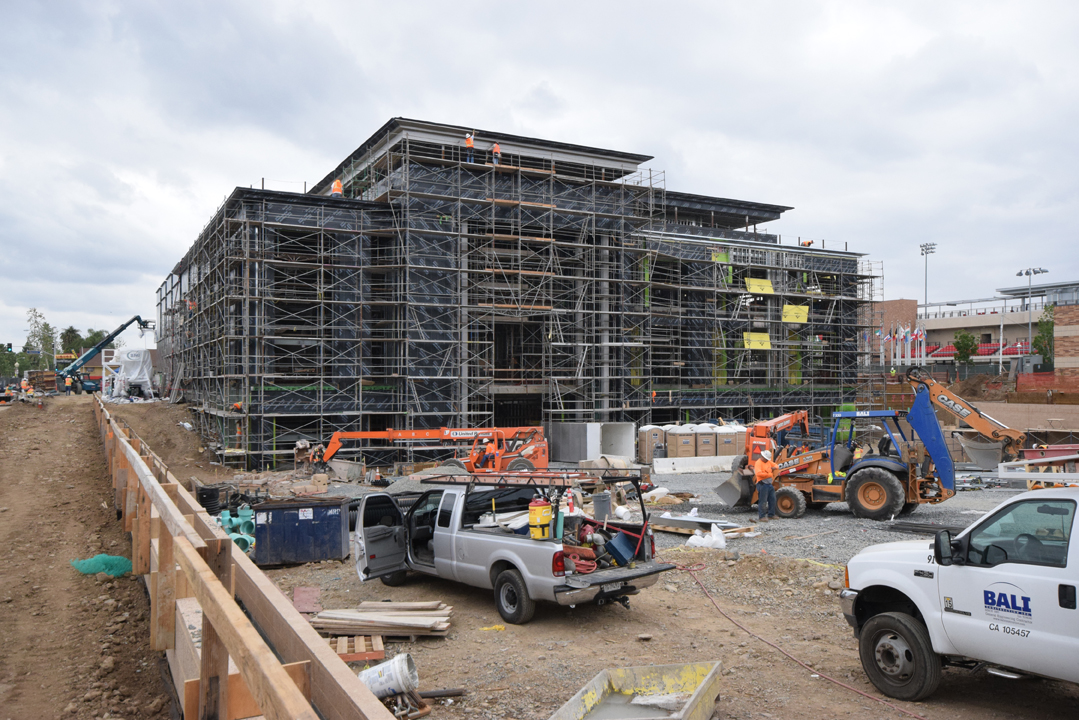 A group of the top donors to the Musco Center for the Arts got an up-close-and-personal view of the 1,100-seat performance facility

A group of the top donors to Chapman University’s Musco Center for the Arts got an up-close-and-personal view of the 1,044-seat performance facility as it rises on the northwest corner of the campus, participating in a guided tour (wearing the required hard hats and safety vests) on Saturday, June 6.

Phase One of the center’s construction is drawing to a close – the foundations, framing and enclosure of the space, and the basic earth-moving for the landscaping. “It’s really incredible to see this taking shape,” said namesake donor Paul Musco.  “It’s hard to believe this building, which we’ve dreamed of for so long, will soon become a reality for Chapman students and audiences.”

Traditionally, at this point in a major building’s construction, a ceremony is held where donors and supporters sign a beam or girder, which is then hoisted into place to support the roof.  “We’re changing that tradition a little,” said Bill Hall, DMA, dean of the Musco Center, as the group gathered inside the center — on the Women of Chapman Stage in Julianne Argyros Orchestra Hall — to toast the completion of Phase One with champagne (each glass decorated with a tiny metal shovel, to mark the close of the “digging” phase).  “We’ll have you sign the beam, and it will then become an art installation for all to enjoy forever, in our backstage area.”

One by one, the major donors stepped up to inscribe their signatures in gold ink:  George and Julianne Argyros, Doy Henley, Tom and Sharon Malloy, Wylie and Bette Aitken, Kathy Hamilton (representing the Women of Chapman), and of course Marybelle and Paul Musco.  (Unable to attend were donors Steeve Kay and Milan Panic, who will sign the beam at a later date).

The Women of Chapman Stage is an impressive thing to experience – standing on it and looking out at where the audience will be in Argyros Orchestra Hall  (that space still crisscrossed by innumerable metal scaffolds), you realize how huge the stage area is … and what’s more, how very lofty are the stagehouse and fly-space above the stage.  It’s all built to accommodate virtually any performing arts company or ensemble in the world, according to Hall, plus all their sets and technical equipment.  “The proscenium opening is HUGE — it’s 62 feet wide by 36 feet high, and the stage is 50 feet deep,” Hall said.  “This stage can handle any Broadway touring company, national touring dance or opera company, any kind of theatre production.”

The addition of a removable orchestra shell, he added, will allow symphony orchestras as well as smaller ensembles — chamber groups, soloists — to achieve their best sound.  When not in use, the 98,700-pound, state-of-the-art shell will be “flown” up and slotted into the flyspace for storage.

Architects Bill Murray and Brian Nichols of Pfeiffer Partners led the tour, stopping the group at several points to explain various aspects of the Musco Center’s interior.  They explained the upcoming “tuning” process for the hall, which will take several weeks (possibly more than a month), beginning in December.  Murray told the tour participants about the abstract sculptural “acanthus stalk” elements on the internal walls of the hall (inspired by acanthus plants in his garden) which will help direct sound, and the adjustable fabric banners in between the acanthus that can be furled or unfurled according to sound requirements.

Once the interior is completed – with all seating, fabrics and wall coverings in place and the stage completely readied — world-acclaimed acoustician Yasuhisa Toyota will arrive, and he and his team will work to adjust virtually anything adjustable within the space to assure that the best possible acoustics will be achieved.  Toyota — who has overseen the acoustics for many of the world’s finest performance venues, including the Sydney Opera House, the Paris Philharmonie and Russia’s Mariinsky Concert Hall — will listen carefully and tinker with the hall during live performances by varied ensembles on the stage, both with and without audiences.  The tuning period will thus involve a “soft opening” of the building to invited audiences (but with no critics allowed until the Grand Opening on March 19, 2016, when all the tuning is done and the building is ready to show off its peak acoustical prowess).

Speaking of that Grand Opening, Dean Hall confirmed that renowned opera star Placido Domingo will appear (on a fantastic set borrowed from Los Angeles Opera, whose leaders, Christopher Koelsch and John Nuckols, were guests on this hard-hat tour).  He also confirmed, for the first time, that another opera legend (and Hall’s former student), soprano Deborah Voigt, will join Domingo on stage for the opening.  That gala opening concert will also include Chapman alumni who have graduated to careers on the grand concert stages of the world, and other guest stars to be announced.  The grand opening ceremonies, a multi-day affair, will also include a community open house to introduce the Musco Center to the Orange County community and campus neighbors in Orange.  Details will be announced soon.

Later, at a celebratory luncheon for the tour participants, Hall was caught off-guard when Julianne Argyros came to the podium and announced that she and husband George had decided to give an additional gift to