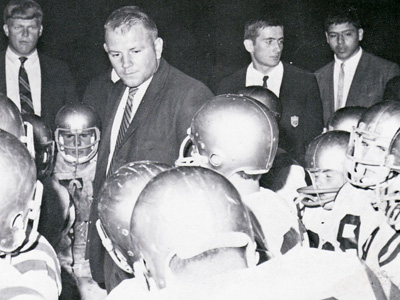 Dave Currey will be inducted into the St. Bonaventure HS Athletic Hall of Fame this weekend.
Campus & StudentsUncategorized

“If you want to go out, go out on top” — a fond farewell to Coach Currey

Friends and colleagues of Dave Currey gathered in the Marv Meyer Faculty Athenaeum on May 13 to reminisce and bid a fond farewell to the retiring athletic director, who has served Chapman University for 25 years.  Chancellor Struppa also announced that in honor of Coach Currey’s retirement, an endowment has been established for the athletic director position, so all future A.D.s will have the title “David Currey Endowed Director of Athletics.”

How do you sum up a storied career in just an hour or so of shared memories?   Well, you can’t — but you can try:


President Jim Doti:
“Back in the early ’90s, we came together as a community to see how we could make Chapman an even better place.  One of the areas was that we needed more students participating in intercollegiate athletics.  In looking around, we found that Division III schools had a higher proportion of the student body participating as athletes.  So we came up with the idea, let’s move to Division III.  When that happened, I was met with stiff opposition from just about everyone, from the booster club to the coaching staff to the trustees, from the student athletes to the parents of those students, who were vehemently opposed.  So, I didn’t really have any allies.  I discussed this with Dave, who had just become athletic director the year before I became president, and he said, ‘Jim, if this is what you want to do and you feel it’s in the best interest of the university, I’ll support you.  I’ll be at your side.’  He was a pillar of support for me.  I had this Rock of Gibraltar at my side throughout some of the toughest meetings I’ve ever had, including one particularly tough one with the parents, who were angry and in tears.  To be there alone would have been really difficult, but having Dave at my side made it bearable.  We got through that, and as a result we moved to Division III, and in the process we went from being a Division II program, losing most of the time, with mediocre facilities and only 150 students participating, to what I think is now one of the leading Division III programs in the nation, with more than 500 students participating, and state-of-the-art facilities.   That’s an incredible legacy, Dave – think about all those students learning about leadership and responsibility, finding friends and camaraderie.  That’s a lasting tribute to you and your program.”


Chancellor Daniele Struppa:
On Dave’s frugal nature, for a fiscal conservative like me, that’s always what I like to hear.  Part of what I have to do in overseeing budgets is to tell people ‘no’ – but I never had to give that speech to Dave. In fact, it was always the opposite.  Dave understands, perhaps more than anyone else I’ve ever met, that every dollar that we have is either coming from a parent who made sacrifices to send their kid to college, or from a friend of the university who decided that Chapman was the place where they would make a philanthropic investment.  And because of that, that money has to be honored; it has to be spent wisely and in the most appropriate way.  And Dave has been a tremendous steward of the resources of the university.  He also deeply understands the notion of ‘student-athlete.’  I’ve taught several students who were involved in our athletic program, and their distinguishing characteristics are their ethical focus, the attachment they have for the university and the team they represent, and also their commitment to academics.  To me, this speaks volumes for what Dave and all of his coaches have been able to do: training students not only in how important it is to win, but how important it is to win in the right way, to play hard but fair, and to commit themselves to their full development as students. For me, it’s been a huge pleasure to work with Dave for the past nine years.”

Penny Brush (former associate athletic director and women’s sports coach):
“Some of the other coaches have shared the fact that Dave is — for want of a better word — frugal.  So the year is 1993.  Dave and I and President Doti are going to the NCAA National Convention in San Antonio.  Dave and I were the scout team; we flew down the day before.  So at the airport we go to the car rental and we get a blue Pinto, the most bottom-of-the-line car they had.  And you should know that Dave doesn’t just have the coaches save money when they travel — he saves money, too.   We didn’t stay at the convention site hotel; oh no.  Those rooms were WAY too expensive.  We stayed – ‘It’s only half an hour away, Penny, come on!’ – at the Holiday Inn Express.  The next morning we came down to breakfast, to our piece of toast and cup of coffee, and we looked at each other and said ‘President Doti CANNOT stay here.’  As only Dave can do, he scrambled around – and of course the convention site hotel said they had no rooms left, but in the end he was able to find a room and President Doti stayed in a very nice place.”
(President Doti, interjecting, “Howard Johnson’s!”)
“But seriously, for all that he’s frugal, we all know the generosity of Dave on the things that really count.  It’s not about budgets.  It’s about the man that he is as a leader.  The generosity of his leadership, and his time, and his mentoring of new coaches; his enthusiasm, his welcoming of people to support the athletics program because it’s great for student athletes…Dave, you have given so generously to us all.  We wish you a wonderful retirement.”

Carol Jue (women’s basketball coach):
“I wouldn’t be a basketball coach if it weren’t for this guy here.  You are one of the most intriguing men that I’ve ever met as a leader.  You make all of us better.  You’ve done so many great things for Chapman that I’m proud to be a part of.  Thank you so much for giving me the opportunity to become a head coach – and I can’t believe it’s now 12 years later.”

Mary Hagarty (former women’s basketball coach):
“Dave has always been a man of few words but big ideas.  One of the things I learned from him was don’t let anything get you too ruffled. Back then, email was just getting started, so I might get an email from an angry parent or an upset somebody, and my first response — as an intense, passionate, young head coach — would be to sit down and answer it in hundreds and hundreds of words.  And I’d go to Dave and say, ‘Here’s what I’m going to say to them!’ — and he’d say, ‘I don’t think you should do that.  Maybe just say “Thank you for your email.”‘ So – I guess the lesson I learned very early was ‘don’t put anything in writing’!  I still visit Chapman from time to time, and the last time I pulled into the lot on Center Street and had a good look at the athletic facilities.  And, you know, during a tenure as athletic director, maybe some people achieve great new facilities…and maybe some achieve entry into an athletic conference…and maybe some move from Division II to Division III — but Dave’s done ALL those things, and stood like a rock.  I’m very grateful I had the opportunity to work with you and learn from you.”


John David Currey (son; Chapman alumnus):
“It’s been fantastic to watch my dad’s career here – not only because of what his accomplishments were, but the people he’s interacted with: the amazing coaching staff and administration.  I’ve been out to Dad’s new home in Utah — it’s beautiful.  He has a big yard — in fact, now he has a new field that he can tell people to stay off of.  Honestly, today is a very sad day for him, although I know we’re all being jovial and having fun.  It’s all at the right time  – it’s been 25 years, and he’s going out on top.  But I think there’s still some sadness there.  So, being the recipient of so much good wisdom over so many years, I decided it was time to give you some advice, Dad.  I, too, have left Chapman, and I, too, left a job after many years.  The first thing I would say is, my best years at Chapman were the years AFTER I graduated.  I had a great time while I was here, but this place is amazing afterwards!  There are a lot of great things you can do and new people that you’ll meet, too.  Plus you can look back on it all with a lot of pride, and be proud of the students that you’ve seen growing up.  And the second part is, when you leave a place, after you’ve worked there a long time, you think to yourself that it’s so scary to see this blank slate.  Whether you’re starting a new company or a new whatever-you-want, the difference is that you have that blank slate, but you have an enormous amount of experience and people behind you that you can call on and who can help with whatever you’ll be starting.  So – you’re not saying goodbye to anyone today; I just wanted to let you know that.  And I want to thank all of you for not only making this special for my father, but special for our whole family.  I’m very proud of you, Dad — congratulations on what’s to come.”

Dave Currey:
“This has been overwhelming, and I really want to say thank you.  I don’t know what else to say.  I started teaching and coaching, and for the first 25 years I remember those days of all the glamor and excitement, from Rose Bowl games to Division I football, and how great all that was — well, that lasted 25 years.  And then the next 25 is what I think of as maybe the best of my life, because at Chapman I found a family that

accepted me and made me feel a part of them. So many wonderful things have happened to us in the intercollegiate world.  I’m really moved by all this.  I’m going on; I’m not retiring.  I’m moving on to the University of Currey.  I’ve got 15 coaches — they’re called my grandkids.  How many men can stand here like I have today, and listen to the graciousness of you — and 12 hours ago my 15th grandchild was born down at Hoag Hospital, when my daughter had her third child.  And my son and daughter-in-law are here today to tell stories.  It doesn’t get any better than this.  If you want to go out, go out on top.  If the next 25 years are anything like the past, I’m in for a great ride.   You’re always welcome to come visit me in St. George, Utah — it’s a beautiful place.  And if you’re not happy, I’ll take you up to Bryce Canyon and drop you off a hill.   God bless you and thank you all very much.”