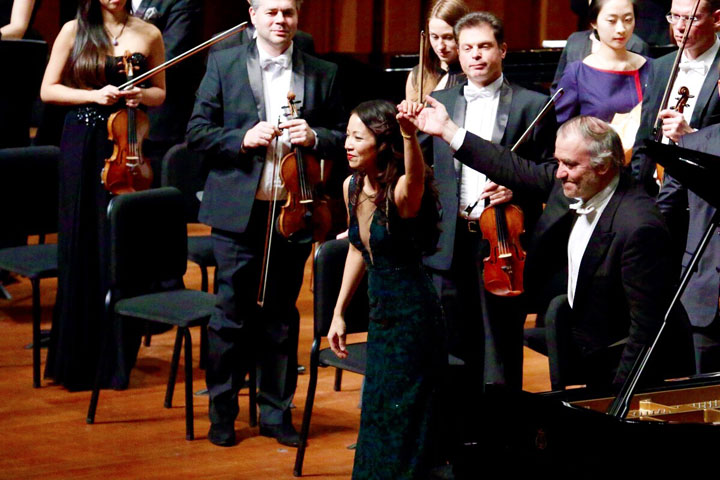 Grace Fong and conductor Valery Gergiev take a bow in Beijing after her debut as soloist with the Mariinsky Theater Orchestra this past December. Photo by Wang Xiaojing.
Arts & Film

Fresh from her winter triumph as soloist with Valery Gergiev and Russia’s Mariinsky Theater Orchestra at the National Center for Performing Arts in Beijing, Grace Fong, D.M.A., director of keyboard studies in Chapman University’s Hall-Musco Conservatory of Music, keeps piling up accolades.  She will be honored as the Distinguished Alumna of the Year by the Colburn Community School of Performing Arts in Los Angeles.   Dr. Fong attended the Colburn School from 1994-1997, studying classical piano under the mentorship of Dr. Louise Lepley, before going on to USC — where she was named the Thornton School of Music keyboard program’s Most Outstanding Student — and then on to the Cleveland Institute of Music, where she achieved her master’s and doctoral degrees.

She’ll be feted during the Colburn School’s annual “Taste of Colburn” event on Saturday, March 21 on the school’s L.A. campus. Dr. Fong will present a
master class for Colburn students
on Friday, March 20, and will perform during the Saturday event.  Tickets are on sale now for the event, which is a fund-raiser for the school:
www.colburnschool.edu/tasteofcolburn
.

“We are pleased to honor Dr. Fong, a celebrated performer and pedagogue, and proud that she is part of the legacy of great musicians educated at the Colburn Community School of Performing Arts,” said Sel Kardan, Colburn School president and CEO.

“It was at the Colburn School that I found more comfort in performing publicly because of their weekly Friday Night Recitals,” Dr. Fong recalled, “and Dr. Lepley continued to serve as a mentor to me after I left the school to pursue my college education. Dr. Lepley kindly guided me to help me find my path. And this was how I realized my career path would without a doubt be in music and piano.”

“Taste of Colburn” is a campus-wide celebration featuring food and drink tastings from downtown L.A.’s top restaurants, a variety of live performances throughout the Colburn School campus, and a silent auction.  Performances showcase students from the community school’s various ensembles and programs.  Proceeds from the event benefit the school’s scholarship and financial aid programs.


Described by one critic as possessing “technical brilliance, infectious energy and sheer enjoyment of music making” (
BC News
), Dr. Fong is a prizewinner of numerous international competitions, including the prestigious Leeds in the United Kingdom, Bosendorfer, San Antonio, Viardo in New York, and Cleveland. Special prizes have included “Best Performances” Prizes of Baroque, Classical, and Contemporary works, as well as the “Jury’s Selection” Prize.

Dr. Fong is also the winner of one of America’s most prestigious piano awards, the 2009 Christel DeHaan Classical Fellowship of the American Pianists Association (at which time she was the first female winner in 12 years).  She also won the Grand Prize in piano from the National Foundation for the Advancement of the Arts, and was thereafter named a “Presidential Scholar in the Arts” and presented with a medallion by the President of the United States at the White House. Other prizes include Gold Medalist for the Wideman International Piano Competition, the winner of the Music Academy of the West Concerto Competition, the winner of the Cleveland Institute of Music Concerto Competition, 1st Prize in the Los Angeles Liszt Competition, 1st Prize in the Edith Knox Performance Competition.