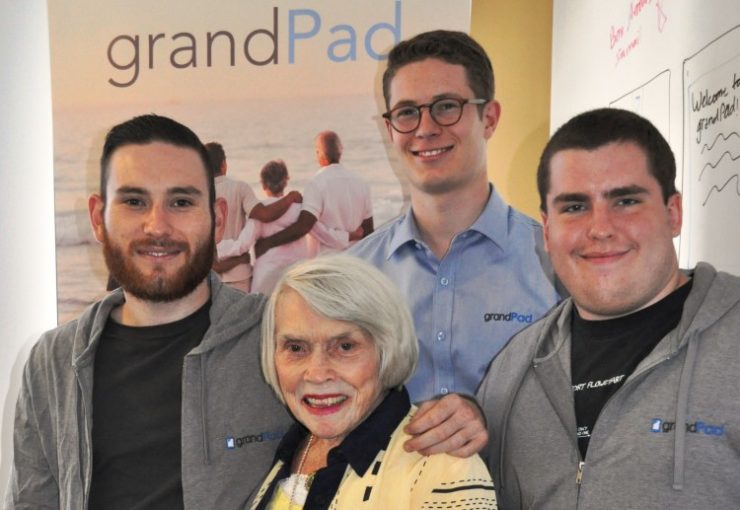 Margaret Silbar has a new grandma brag book, and so much more.

Silbar, 81, totes a thin computer tablet loaded with a custom software system created by a team of Chapman University students from the School of Computational Sciences. And she couldn’t be happier with the device. Using a computer stylus, she quickly flips through several family photos and glows with pride as loved ones’ faces fill the screen.

“This is my grandson-in-law who runs the restaurant,” she says. “He is just so good at what he does … Oh, there’s a Charlie photo. Charlie is Danny’s dog.”

She chuckles. “And there’s Charlie with a basketball!”

Silbar isn’t the only one smiling. The founders and development team for grandPad are delighted that their innovative product is a hit. Convinced that their own grandparents were missing out on the fun of social media, they figured others might be, too. So they devised a product built with a few essential features that appeal to seniors, without the boggling surplus of applications, functions and programs pre-loaded on most tablets.

Watch a video story on grandPad.

They winnowed the functions down to phone, video phone, photos, email and voice mail, weather and a select collection of games and music. Streamlined graphics feature large-print instructions and colorful touch-screen buttons. At home, the tablet rests in a cradle that also recharges the device without forcing unsteady hands to plug in a tiny cord.

Isaac Lien ’17, co-founder of grandPad along with his father, Scott Lien, a former executive with Intuit, says the concept was sparked when he realized how much his own grandmothers in Iowa hungered for family news and the latest photos of the grandchildren but were uncomfortable with Skype, Facebook and even email.

“I wanted to be able to send them photos, emails, and do video calls, but there was no easy way for us to do these things,” he says. “That’s why we set out to create grandPad.”

The team of Chapman students, with skills in communications, web development and video production as well as computer science, refined the software and marketing plan leading up to grandPad’s release. They worked out of Launch Labs, an incubator program within Chapman’s Leatherby Center for Entrepreneurship, using research that included interviews with more than 100 seniors and numerous user tests.

“I’ve been to at least 10 different senior living communities, many of them multiple times to do demonstrations and get user feedback,” Lien says. “Their fresh eyes and fresh perspectives have been invaluable.”

Among the lessons: Seniors prize their privacy, which influenced grandPad’s safe design, says David Tyler ’14, a key programmer of the device.

“There’s no way to get viruses. There are no pop-up windows saying ‘Install this.’ They cannot get infected,” Tyler says.

The grandPad team launched a soft opening last summer, making the tablets available online with an all-inclusive subscription fee. They are also exploring the possibility of brick-and-mortar store sales, using pilot sites in the Midwest.

For Silbar and other grandPad aficionados, the tablet already has opened a new way of connecting with family. When her grandson Ryan Burns ’14, a computer science graduate also involved with grandPad’s development, first brought the product to show her, Silbar says she was hooked.

“I love pictures of my family,” she says. “I can do this myself. It’s incredible.”