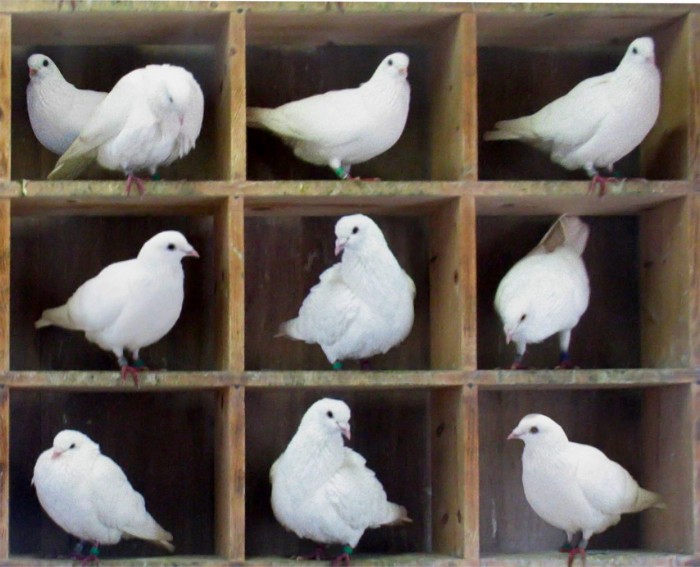 A quantum physics effect flies in the face of a time-honored mathematical principle.

It’s simple math: If you put three pigeons into two pigeonholes, at least one pigeonhole will have two (or more) pigeons in it.  Ten pigeons in nine pigeonholes – same thing.  The so-called “pigeonhole principle” has been a basic tenet of mathematics since at least 1834, when German mathematician Peter Gustav Lejeune Dirichlet, in his work in number theory, developed it as the very underpinning of what it means to count (he called it the “drawer principle” or
Schubfachprinzip
).   Basically, it underlies almost all of conventional mathematics.

And it’s pretty easy to understand, right?  Well, here’s where the wacky world of quantum physics has its say – and, as usual in Quantum Bizarro World, much of what we take to be basic and “real” is wrong.   Wolf Prize and National Medal of Science-winning physicist Yakir Aharonov, Ph.D. and his colleagues in Chapman University’s Institute for Quantum Studies – Fabrizio Colombo, Ph.D.; Sandu Popescu, Ph.D.; Irene Sabadini, Ph.D.; Daniele Struppa, Ph.D.; and Jeff Tollaksen, Ph.D. – took on the time-honored principle in a
recent paper
– and flushed those musty pigeons right out of their pigeonholes.

Or rather, into each other’s pigeonholes.   Or…not.

The laws governing the quantum world suggest that things can be in many different places at the same time. So, a single particle can be in both boxes at the same time – but only when you’re not “looking.” Once you look, and observe the particle, it will be
forced
to be in either one box or the other.

“But if your only tool is a hammer, then you tend to treat everything as if it were a nail,” says Tollaksen, director of the Institute for Quantum Studies. “The problem was that the ‘hammer-type’ measurements usually are not the most useful in figuring out how the quantum world links the future with the present in subtle and significant ways.”

Aharonov and his team have worked for two decades on new types of gentle “weak measurements” which can see these linkages — “akin to tapping something softly with your finger rather than smashing it with that hammer, which forces each pigeon to be in a single box,” according to Tollaksen.

And this allows you to put as many particles – or pigeons – in those 2 boxes, as you want. Even an infinite number – yet no two pigeons will ever be in the same box together.    “It’s as if the particles know, and avoid each other,” says Tollaksen.

Has your head exploded yet?   Let’s call this – as the physicists do – the Quantum Pigeonhole Effect.

All this weirdness has revolutionary implications for our understanding of the most exotic aspect of nature: non-locality– the theory that particles separated by huge distances, even at opposite ends of the universe, are connected and can affect each other’s behavior.  “Non-locality is regarded as the most profound discovery of science,” says Tollaksen.

There are different types of non-locality which quantum mechanics showed could not exist in classical physics. In classical physics, for a particle to experience a force it must be at the same location where the force is. In quantum mechanics, you can have a force in one place while the particle moves outside – and the particle will still feel this force. This is called the Aharonov-Bohm effect, discovered by Aharonov and David Bohm in 1959 and now considered one of the cornerstones of modern physics.

There is another kind of non-locality that has to do with the connection between two particles that used to be next to each other in the past and then subsequently are separated to a large distance. Even after they are separated, they appear to maintain a strange kind of connection –what Einstein, the originator of the idea, called “spooky action at a distance.”

However, these surprising kinds of connections had many limitations. For example, the particles had to originally be next to each other, and only a relatively small number of particles in the universe could be connected with each other at a time. “To characterize these limitations,” said Tollaksen, “one of my Ph.D. advisors, Abner Shimony, called it ‘passion at a distance.’”

While the above was remarkable enough, now it appears this was only part of the story – as laid out in the researchers’ new quantum pigeonhole paper. The paper has introduced a new kind of quantum connectivity between particles which transcends these limitations.

“This connectivity is happening all the time on a much bigger, cosmic scale. With the new kind of quantum linkages which we have introduced, the particles don’t have to interact in the past. In fact, they have no ‘idea’ that the other particle even existed,” said Tollaksen.

“This is a surprising breakthrough,” said physicist and Institute member Paul Davies: “It’s remarkable that it’s still possible to discover something fundamentally new about quantum mechanics, which has been around for nearly 100 years. Here we see a richer, more complex set of long-range correlations that nobody knew existed before.”

“The new results seem fascinating,” said Institute member Leonard Susskind (the “father of string theory” and principle protagonist of Stephen Hawking). “I would guess that the new effect is a serious step in understanding quantum correlations.”

What implications does all this have for the real world?  The first kind of non-locality has already given rise to the fields of quantum computing and quantum cryptography, but creating entangled particles is difficult.  In essence, though, the principle of cosmic connectedness says that these linked particles exist
everywhere
, which could have “unique technological utility,” Tollaksen said.

The research goes on – and it’s fairly certain that more challenges to the reality we thought we knew will be discovered by members of the Institute for Quantum Studies at Chapman.  Those put-upon pigeons await the outcome.

For more about the research visit Chapman University’s Institute for Quantum Studies.

More media coverage of the Chapman team’s Quantum Pigeonhole Effect can be found at: