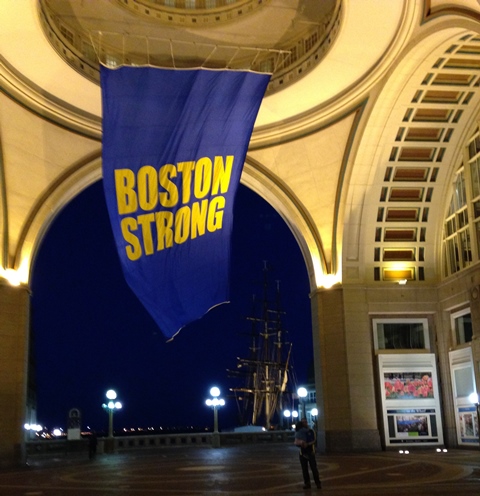 President Jim Doti writes about the experience of running the 2014 Boston Marathon one year after the Boston bombing in the current issue of Marathon and Beyond magazine.

Editor’s Note: President Jim Doti writes about the experience of running the 2014 Boston Marathon one year after the Boston bombing in the current issue of Marathon and Beyond magazine. The magazine, which includes additional photos, is available to online subscribers and in bookstores and running stores across the country. The full article is reprinted below. Joining him in the historic marathon was his son, Adam.

President and Donald Bren Distinguished Professor of Business and Economics

At the Start Line:
As my son, Adam, and I wait for the starting gun to go off for the running of the 118
th
Boston Marathon, I overhear a fellow runner tell her friend, “Whenever I run Boston, I feel like I’m Clark Kent turning into Superman.” I know what she means. At this moment, I feel like I’m faster than a speeding bullet, more powerful than a locomotive and able to leap tall buildings in a single bound.

Mile 6:
Both sides of Waverly Street in Framingham are filled with screaming fans, 10 deep. Many are holding placards or wearing t-shirts emblazoned with a simple but powerful message: “Boston Strong.” I see a young boy holding up a large photo of Martin Richard, the 8-year-old victim of last year’s bombing.

Most of these fans have come out not only to cheer the runners on but also to honor those fallen in last year’s race. As I run by the exuberant fans, I’m reminded of what the winner of the 68
th
Boston Marathon, Amby Burfoot, told us during the “Boston Marathon Legends” presentation at the previous day’s race expo: “It wasn’t the runners who were attacked last year, it was the spectators. So be sure to high five as many as you can for 118 years of support and for giving fast and slow alike the thrills of a lifetime.”

Mile 12:
As Adam and I near the Wellesley College campus, we hear the shrill screams of coeds who have lined Central Street. Most of the women have signs, like “Kiss me, I’m Italian.” One was so original, I had to stop to take a photo. It was an equation that read:


Most pleasing to my ears were the shouts of “Go, Chapman!” when the coeds recognized the “Chapman University” name on my running shirt. One coed even stopped to tell me that she had wanted to attend Chapman, but Wellesley gave her a bigger scholarship. Oooh… that hurt!

Mile 16:
Adam and I hit the first of the four Newton hills. These are not major uphills, but after running downhill for most of the previous 15 miles, my quads are starting to scream. It’s also getting hotter. While 75 degrees may sound pleasant, runners generally start to heat up when the temperature exceeds 60 degrees. At this point in the race, I feel like my head’s been zapped in a microwave oven for 40 seconds.


Mile 19:
We hit the third Newton hill. Pounding the pavement has become so painful that my pace has slowed to the point where even walkers are passing me. Now, more than ever, I need inspiration, and looking down at my race bib, I find it.

At the “Legends” talk, Kathrine Switzer spoke about how running makes us feel fearless in a fearful world. She told us that it was with that attitude in mind that she decided to be the first woman to register to run the Boston Marathon. That happened in 1967, five years before women were officially allowed to compete. The name she gave on her entry form was “K. V. Switzer.” Race officials didn’t realize that “K. V.” was a woman. So not suspecting anything amiss, they sent her bib # 261. But when a race director saw (Horror of horrors!) a woman racing with an official bib, he tried to grab her off the course. An iconic photo of that scene with Kathrine evading “capture” has inspired male and female runners, alike, ever since.

After her talk, Kathrine signed “Jim! Be 261 Fearless! K. Switzer” upside down on my bib. That is, I thought it was upside down until I looked down, huffing and puffing on that third Newton Hill, and saw Kathrine’s message, reading from my perspective right-side up. It was as if she were beside me, whispering in my ear, “Jim, Be Fearless.” I have no doubt that Kathrine Switzer helped me over that hill.

Mile 20.5:
We hit the final Newton hill, known to runners around the world as “Heartbreak Hill.” For the first time in the eight Boston Marathons I’ve run, I’m forced to walk the last few steps to the top.  I tell Adam to go ahead and finish without me, but he responds, “We started together, and we’ll finish together.” This brought to mind the words of another “Boston Legends” speaker, ’83 champion Greg Meyer. He told us that everyone thinks his favorite Boston was the 1983 race that he won. “Actually,” he said, “My favorite Boston was the one I ran with my son.” Now I know what he meant.

Mile 25.8:
When Adam and I turn onto Boylston Street to deafening cheers from throngs of devoted fans, I feel like we’re entering Olympic Stadium. Just before crossing the finish line in five hours flat, Adam and I clasped our hands together outstretched, pumping the air above us.

Past the Finish Line:
As Adam and I join other finishers hobbling forward to have medals placed around their necks, I recalled Race Director Dave McGillivray’s words at the “Legends” talk:


That’s exactly what my band of brothers and sisters in the race, the volunteers on the course and all the supporters in the stands did: We took back our marathon.