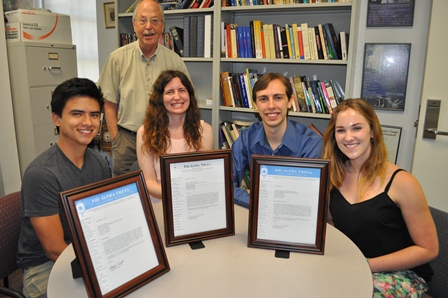 Those final exams were a memory, her diploma was in hand and a mild, gentle summer was unfolding outdoors. So where did a newly-minted alumnus spend

Those final exams were a memory, her diploma was in hand and a mild, gentle summer was unfolding outdoors. So where did a newly-minted alumnus spend her first couple weeks of post-graduate life?

In the
Ludie & David C. Henley Social Sciences Research Laboratory
buried up to her eyeballs in HTML coding and the final editing of the 2014 issue of
Voces Novae
, the award-winning online history journal produced by students in the Department of History’s Alpha-Mu-Gamma chapter of Phi Alpha Theta, a history honor society.

“It is a lot of hard work but I think it does feel really good when it’s all over. If feels good when you’ve accomplished something,” said
Emily Neis
’14, the lead editor of this year’s
Voces Novae
.

Happily, it’s a task accomplished and the sixth issue of
Voces Novae
is now published and available for online viewing. Neis and her fellow editors reviewed 28 submissions, ultimately choosing just eight for publication. This year’s subjects ranged from an exploration of the refugee camps established after the 1906 San Francisco earthquake to the role of American Sign Language on deaf education in the 19
th
Century. Many of the students traveled extensively to complete their research, from the British National Archives to an abandoned California gold mine.

That kind of selectivity and rigor has paid off for the journal in its own short history. Launched in 2009,
Voces Novae
is already a three-time winner of the prestigious Gerald D. Nash History Journal Award for Best Undergraduate Electronic Journal. The Nash award is sponsored by the history honor society Phi Alpha Theta and is given to journals that demonstrate excellence in scholarly merit, variety and overall literary merit.

To be eligible for the annual contest, the journal must publish by July 1, a deadline that requires senior editors to put in those summer hours in the Henley Lab in Roosevelt Hall.

But Neis says she didn’t mind.

“It’s an honor to be chosen,” she says.
Department of History Voces Novae