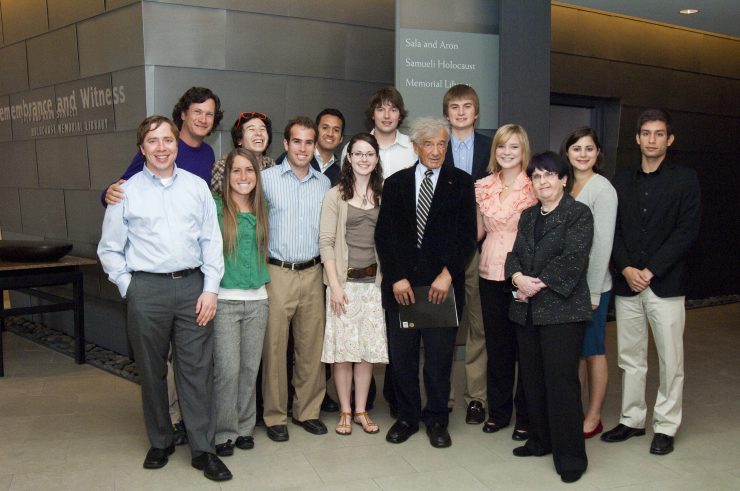 Voices of Memory and Meaning

Marilyn Harran, Ph.D. reflects on the Rodgers Center for Holocaust History as it prepares to celebrate its 10th anniversary.

This story appeared in the spring 2010 issue of
Chapman Magazine.

Not even in her dreams did Marilyn Harran see this coming: national awareness of Chapman as a center for Holocaust education, an extraordinary roster of survivor sharing their stories on campus, a Holocaust memorial library with an array of resources for research, and community outreach effort that might be the program’s biggest idea of all.

“It would take a lot of chutzpah to say I had that kind of vision,” Harran, Ph.D., said recently, as the Rodgers Center for Holocaust History prepared to celebrate its 10th anniversary. “What I envisioned was being able to raise $200 to take my students to the Museum of Tolerance (in Los Angeles).”

“So to play a role in turning that reputation around and having it happen through the work of Chapman University is really something for which all of us can be proud.”

The “us” includes a host of donors who have embraced the program at Chapman, as has President James L. Doti, who “when I came to him with one idea and then another, invariably said, ‘Go for it,’” Dr. Harran said.

Then there are the members of the 1939 Club, one of the largest and most active Holocaust survivor organizations in the United States and “the heart and soul of the program,” Dr. Harran added.

But the driver of the effort, the one who has helped make it all happen, is Dr. Harran herself, the Stern Chair in Holocaust Education and the founding director of the Rodgers Center.

Among her big ideas: What if the program mentored not just Chapman students but those at area middle and high schools as well? What if efforts connected them with the real-life stories of survivors so they could grapple with the meaning and lessons of the Holocaust?

For 11 years now, students have been participating in the Holocaust Art and Writing Contest, and in 2010, they represented more than 105 schools from throughout Southern California. Participants listen to the testimonies of survivors and witnesses and then use what they learn as inspiration for their own works of art.

As it says on the Rodgers Center web page for the contest, “A young person who meets a Holocaust survivor is forever changed by that encounter. Yet each year brings fewer such opportunities and gives added urgency to preparing today’s young people to become witnesses to the future.”

High school student Natalie Beisner became such a witness when she wrote a poem about Silvia Grohs-Martin, the last surviving member of the Jewish Theatre of Amsterdam. Beisner read her winning poem at the annual contest  award ceremony in Memorial Hall and when she finished was surprised to learn that Grohs-Martin, then in her late-80s and quite frail, had made the trip from Los Angeles to attend the ceremony.

Grohs-Martin came forward and Beisner rushed from the dais, the two meeting at the front of the stage to share an embrace as they burst into tears.

“It was one of the greatest moments ever,” Dr. Harran recalled.

Not only did the student and the survivor remain in touch, but Dr. Harran developed a friendship with Grohs-Martin and helped her live out her days without having to give up the last measure of her independence.

“It’s not just about vision and purpose,” Dr. Harran said, “it’s about things you never could have imagined being a part of but that become some of the most meaningful and important things of life.”

The meaningful moments and milestones have helped the Rodgers Center quickly carve out its own place in Chapman history. Among the high points:

While the past 10 years have have been an extraordinary time in the history of Holocaust studies at Chapman, it’s important not to think of the anniversary as an end point, Dr. Harran said. She describes the decade ahead as “the most important we could possibly have.”

“We have to make the most of this opportunity with the survivors, and we have to think in directions about how we will effectively teach the Holocaust when they are gone.”

Who then will carry their witness to the future?

At Chapman, the legion of voices is growing.