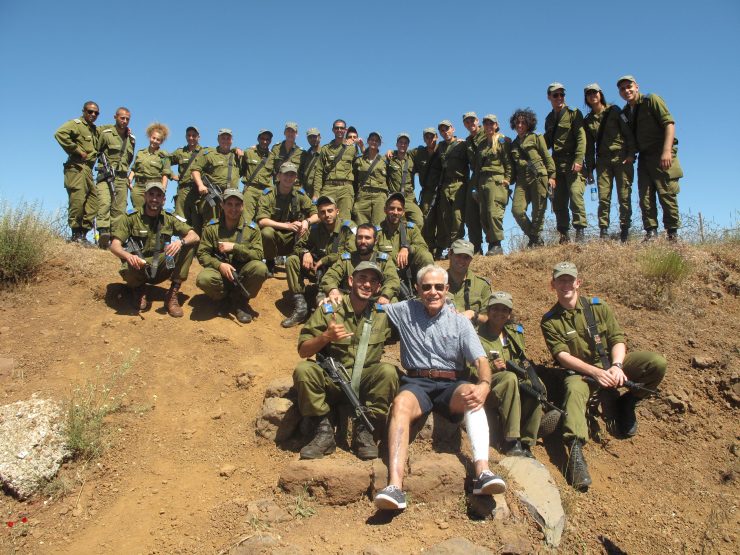 In this web exclusive for the winter 2014 “Chapman Magazine,” Chapman Trustee David C. Henley recounts his travels in Israel.

This is web-exclusive content, supplementing the winter 2014 issue of Chapman Magazine.

I was sweltering, tired and hungry following my three-hour journey via train, bus and taxi from Jerusalem to the Chapman “dig” at Tel Jezreel, and I yearned for a sandwich, cold drink, shower and short lie-down before visiting Chapman Professor Julye Bidmead, her student Marilyn Love and their colleagues at the archeological site.

But when I arrived at what was to be my home for the next four days, the 14-room Gilboa Guest House at nearby Gidona, a small communal settlement founded by Yemini immigrants in 1949, hotel owner Itzik Nathan had more immediate plans for me.

“David, it is important that before you eat and rest you know where our two safe rooms are located,” said Nathan, 48, as he led me first to a large safe room off the lobby and then to the second haven that is adjacent to the outside recreational area where a half-dozen children cavorted in a tiny above-ground plastic swimming pool.

“These rooms are lined with two-foot-thick concrete that is reinforced with steel beams. They have steel doors and reinforced ceilings and they contain cots, food, water, medical supplies and emergency electrical generators. Gidona and the Jezreel Valley, where the archeologists are working, are quiet right now, but rocket and missile attacks could occur at any time,” he said as I inspected the rooms.

“If you hear the Code Red air raid sirens sound, join the rest of us in a safe room. I give this warning to all our hotel guests, my staff and my family, he continued, explaining that safe rooms have been mandatory in all Israeli houses, apartments, hotels, shopping malls and public gathering places since the early 1980s.

“The safe rooms also contain air filtration systems that will protect you against sarin gas and other poisons,” he added.

Peace reigned during my visit with the archeologists, however, and I had no need to enter the ominious safe rooms again.

But a week later, when I was traveling in the Israeli-occupied Golan Heights that adjoin Israel’s borders with Syria and Lebanon, the placidity I had found in Tel Jezreel and at the Gilboa Guest House was not in evidence. Two rockets had been fired into northern Israel, and although they fell short of their targets, I came upon anxious citizens and dozens of Israeli tanks, armored cars and columns of heavily-armed infantrymen rushing to the front.

There is no peace in the Holy Land, and war could break out at any time.

>>MORE: Read “In the Valley of Wonderful Things,” about the archaeological dig in Israel led by Chapman Professor Julye Bidmead.