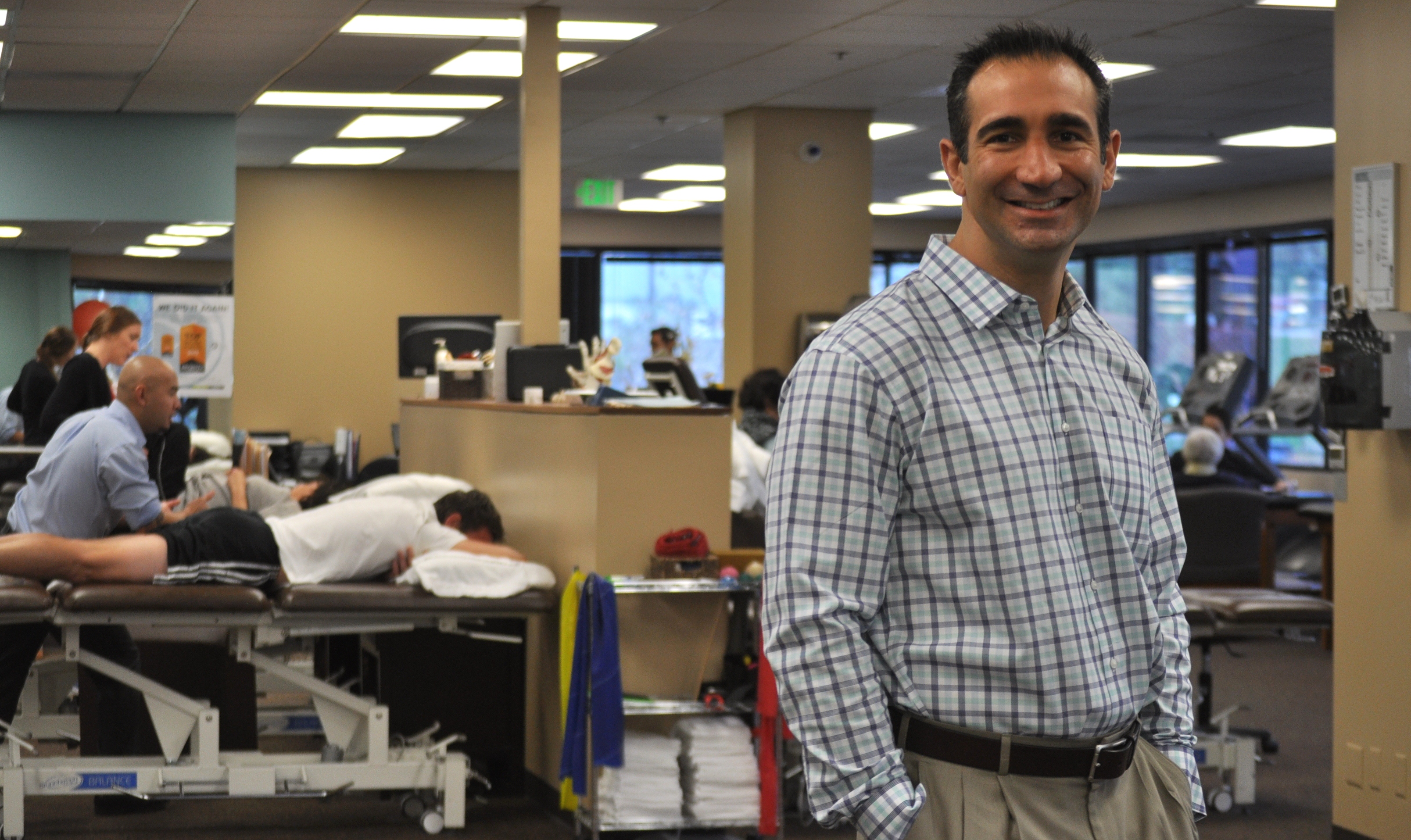 Football was his game of choice, and he thought it would be his future. He was a senior at a powerhouse high school, and serious college football scholarships were on the horizon. Then came that day in Hell Week when it all ripped apart.

“My cleat was stuck in the grass as I was tackling somebody. My knee bent the wrong way,” says Rich Coury ’94 (MPT ’96).

The knee injuries were multiple and devastating. So that was that. Or so Coury thought.

A regimen of physical therapy produced a remarkable recovery, so much so that he even considered playing ball again. But something else sparked his interest. Pedaling on a stationary bike, Coury says he was flooded with the realization that physical therapy was what he should do with his future.

“I just had this epiphany on my bike warming up, and I realized how much my therapist had helped me and I felt like I was called,” he says. “It was a very vivid moment.”

It was a good call. Today Coury is a board-certified orthopedic specialist and co-founder of Coury & Buehler Physical Therapy, which runs four clinics in Orange County, Calif., and was recently named Practice of the Year by Advance magazine, a leading trade publication for the physical therapy profession.

That desire to help people recover strength and mobility still drives Coury and shapes every aspect of the clinics, he says.

There won’t be a shortage of need. Alas, young athletes and weekend warriors have a tendency to get injured, baby boomers’ knees grow creakier by the year and Web junkies hunched over mobile devices are causing literal pains in their necks. Coury & Buehler specializes in that kind of work. But there are other arenas for physical therapists, including hospital settings and skilled-nursing facilities. All are healthcare jobs that the
Bureau of Labor Statistics predicts will push up employment for physical therapists over the next several years.

So, it might seem that physical therapists needn’t work hard to attract business. But that didn’t prevent Coury and his business partner, Brandon Buehler, from building a physical therapy practice that assumes nothing of the sort. Ten years ago they embarked on an ambitious plan to create a practice where a patient-first philosophy permeates every aspect of the operation, from the front desk greeter to each hands-on therapist.

“It was our intention to be the best,” he says.

Coury attributes much of their growth since then to their commitment to offer their staff paths to greater responsibility and co-ownership. Early in their careers he and Buehler noticed that many clinics struggled to retain good therapists.

Consistent patient care suffered. So when they launched their practice, they made in-house advancement opportunities a priority. They knew that keeping great therapists would provide the best patient experience and spark vital word-of-mouth referrals.

“We knew we had to put a huge emphasis on continuing education and mentoring. We knew that education doesn’t end with schooling. So that was built into our system from the beginning, for ourselves as well as for all of our staff,” he says.

Among those who benefited and stepped into a leadership role in the practice is Angelo Urquico (DPT ’05), who is a partner and vice president of operations for the chain of four clinic locations. Urquico is one of numerous alumni of Chapman’s
Doctor of Physical Therapy Program working at Coury & Buehler, twice named to the
Orange County Register‘s list of Top Workplaces.

“It’s been pretty amazing. We do a lot of leadership and management training. It’s very fulfilling,” Urquico says. “The culture that they created really is a culture of people caring for each other.”

It also helps that such an attitude comes naturally to people drawn to this branch of health care, Coury says. Like him, many physical therapists trace their decision to enter the industry to a time when they were a patient in need of tender attention and were inspired by their own physical therapists.

“They have a passion overall to help people,” he says.

For Coury and the alumni working with him, it looks like a winning game plan for all.