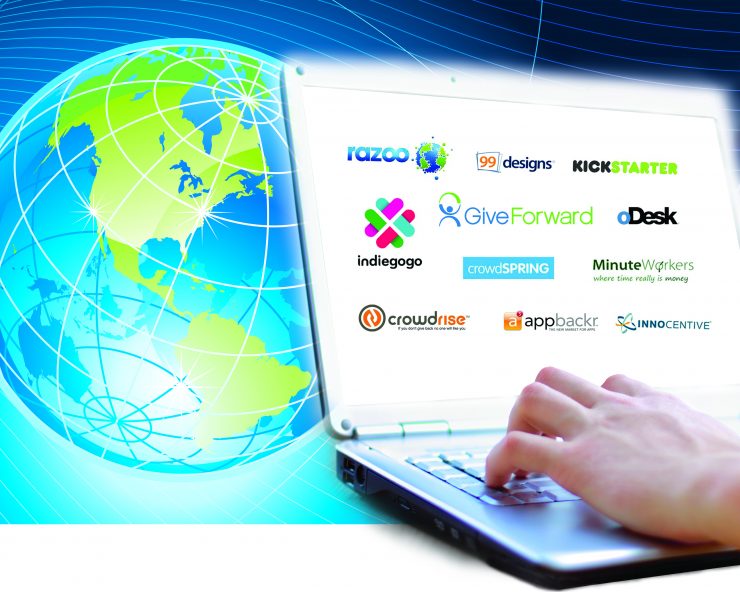 This story appeared in the winter 2014 issue of
Chapman Magazine
. By Dennis Arp, Ash Stockemer ’14 and Anna Rose Warren ’16.

Who says you can’t put a price on happiness? Tony Cuseo ’12 picked a figure of $3,000, and when his
Indiegogo.com campaign
hit that target, he had the green light for a documentary film about what makes people happy. And that made him pretty ecstatic himself.

Cuseo is one of the multitude of Americans making their dream projects real thanks to the Internet phenomenon of crowdfunding — the practice of bankrolling a project by attracting small donations from a huge pool of people. That seed money supports everyone from product inventors to scientific researchers, independent filmmakers to intrepid cake-bakers, pursuers of high ideals to designers of high-end underwear.

The growth is startling. Money raised worldwide has all but doubled each of the past two years, reaching an estimated $5.2 billion in 2013. Where once there were just a few crowdfunding platforms now there are hundreds, each catering to ever-more-specific niche clienteles. And coming soon may be the chance to sell an equity stake in your startup, which promises to open a whole new can of crowdfunding possibilities.

But whether the return is big profits or mere trinkets, it seems that all you need these days is an idea, a compelling story and some social-media savvy to hit the ground campaigning. For entrepreneurs, it’s nothing short of a revolution, said
Professor Richard Sudek
, director of Chapman’s
Leatherby Center for Entrepreneurship and Business Ethics
within the Argyros School of Business and Economics.

“We haven’t seen anything fundamentally change startups like this in the last 30 to 40 years,” he said.

Anthony Ferraro ’13 was a freshman economics major at Chapman when he broached his big idea: a Victoria’s Secret for men. He and his partners — co-founder Jeri Luhtanen ’14 and Navin Khetarpal ’14 — turned the concept into
SWAV
, a brand they pitched as “the most comfortable, functional and technologically advanced underwear for men.” Their groundwork won Chapman’s business plan competition and then captured the
Whitman Entrepreneurial Idea
award at Syracuse University. But the budding entrepreneurs still needed cash to launch a company, so they started campaigning on
Kickstarter.com
. They were going for more than money.

“We wanted market validation,” Ferraro said. “We needed to prove to ourselves and investors that our products would sell.”

They beat their funding goal by more than $10,000, raising $57,000 from 870 backers. Some pledged as much as $3,200 and in return got a chance to sample the product. Those backers were paying for more than underwear, said Sudek, Ph.D. “There’s a fascination, an intrigue, with helping others,” Sudek said. “Culturally, we celebrate entrepreneurs, and I think people are interested in being a part of that energy. For psychological reasons, they want to say they were one of the original backers of a successful product.”

Soon those backers may also have a chance to acquire an actual stake in a crowdfunding venture. The
Federal JOBS act passed in 2012
and follow-up rules proposed by regulators in October would allow crowdfunding backers to gain equity shares in a startup. Some see it as the logical next step in fundraising via the Internet; why shouldn’t ground-floor investors participate in future profits, and why shouldn’t those opportunities be available to everyone?

Others see potential pitfalls. They predict that naïve investors will fall victim to fraud, or at best invest with their hearts instead of also going deep inside the financials.

Chapman economics professor
Terry Burnham, Ph.D.
, sees both sides of the debate. Crowdfunding is fine for investors who really understand the risk, he said. “But if they’re making loans expecting to be repaid, there’s a sense that people will suffer the problems we’ve seen in other areas where there’s a lack of a market-disciplining force.”

Burnham, who studies the biological and evolutionary basis of human behavior, has dabbled in crowdfunding himself. A friend asked him to invest in a new Hal Hartley film, so he gave $25 and eventually got a DVD of the movie. In the end it was a less-than-satisfying experience.

“I’ve gotten a ton of value from his movies over the years, but I didn’t particularly love this one,” he said.

“If you like Hal Hartley and you think it’s a good thing that the world will have another of his movies, then it’s a good thing,” he said. “But if you’re looking to make money on something, it’s likely that you’ll end up disappointed. And the way markets work is that the disappointment won’t come slowly; it’ll hit fast and hard.”

>>MORE: Fiacco is the game designer for an interdisciplinary crew of computational science and digital arts students that won first place at the inaugural Intercollegiate Computer Game Showcase hosted in April 2012 at Chapman University. Read on Happenings.

Things hit quickly for Liz Fiacco ’12 and her creative cohorts pitching the smartphone game
Axle
on Kickstarter, where it only took a month for them to exceed their $15,000 goal. A good video, quality promotional offerings and social-media savvy all contributed to their success, Fiacco said.

“We feel like we now have personal relationships with our donors,” she added.

People invest in campaigns like Fiacco’s for several reasons, said
Niklas Myhr, Ph.D.
, social-media and global marketing professor in the Argyros School of Business and Economics. “Basically they want to support a dream or they ultimately see a personal benefit to the project,” he added.

Connections with friends and followers are critical.

“Asking a community to help you create something is the highest use of social media,” Myhr said.

Before making his ask, filmmaker
Will Prescott (MFA ’07)
followed a key facet of Myhr’s advice for crowdfunding success: Support the campaigns of others before you seek their support for yours.

“Whether or not you believe in karma,” the professor said, “you want to develop a reputation for being generous.”

Prescott said that he supported a number of others’ projects — films, indie comic books, Web series and nonprofit inspirational projects among them — and what he learned informed how he crafted his own campaign. In 2012, Prescott hit his goal of $60,000 on Kickstarter to fund
Feeding Mr. Baldwin
, his dark comedy about friendship and dismemberment.

“I really believe that your success depends on how you plan from the start,” said Prescott. “Several months of planning is required before you go live.”

Like Prescott, other indie filmmakers are lining up to get their hands on crowdfunding cash. Even student films can cost tens of thousands to produce, which means that 90 percent of the process is fundraising, said award-winning documentarian
Sally Rubin
, a Dodge College professor.

“Because there aren’t a lot of student grants available, crowdfunding is the easiest avenue for students,” she said.

Missy Laney ’11 works for the Sundance Institute
#ArtistServices
Initiative and so helps indie filmmakers explore ways to get funding. She said that in addition to raising money, a good crowdfunding campaign functions as early promotional outreach.

“It not only creates new fans, it aggregates those fans,” she said. “Essentially they’re joining the team.”

Laney interacts with others on Twitter, participating in “tweetups” and helping filmmakers explore options for funding.

And what motivates those fans is a sneak peek at the film itself, plus a chance to get thank-you gifts like promotional materials, tickets to preview screenings and sometimes even a screen credit. But it all starts with a good trailer, and that’s true even for those seeking support for nonfilm projects.

“You should never underestimate the importance of making a video that’s engaging, especially in a humorous fashion,” Myhr said. “That’s how you get people not just to support but to share. That’s how a campaign goes viral.”

Ferraro and his SWAV underwear partners know this firsthand. A
clever four-minute video
shot during a Chapman end-of-the-semester undie run garnered more than 420,000 views and was critical to driving awareness of their crowdfunding campaign.

“With the industry evolving, filmmakers are no longer ‘just’ storytellers; they are entrepreneurs, marketers and sometimes distributors, too,” Laney said. “They are involved with the film from cradle to grave.”

Cuseo could use some of that involvement right about now. He’s still working on his documentary film about what makes people happy, and he may have to return to crowdfunding so a professional editor can help him finish it.

He has plenty of raw footage gained during a nationwide journey documenting people’s sources of joy. He slept in his Honda Civic when a friendly couch wasn’t available, and after a year on the road he has some great lessons to share – including that $3,000 isn’t nearly enough to produce a marketable documentary film about a recent graduate’s search for happiness. Still, he couldn’t possibly put a price on the wealth of experiences he amassed.

“I met some strange and fantastic people,” Cuseo said. “After a few months you get a cool network of people who like you and want to help you and give you connections.”

Among those now in his network is a man in Savannah, Ga., where one afternoon in a Starbucks Cuseo overheard him discuss his plans for a book about the importance of living life with passion. Cuseo later interviewed the man for his film and then heard him say, “I’d really like it if you’d follow me to my bank, because I want to donate to your project.”

“Part of me feels that my faith in humanity is renewed as a result of this concept,” Cuseo said.

And isn’t that a happy outcome?