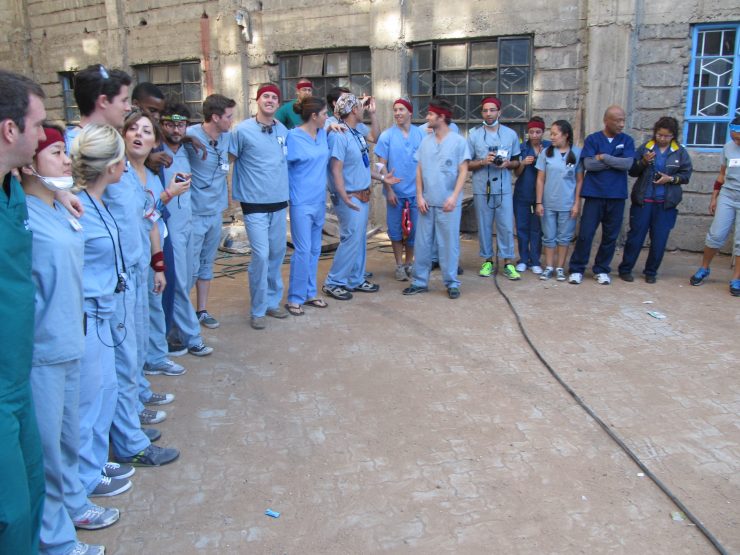 Sean Vreeburg ’09 (M.S. ’10) led this team from the USC Dental Humanitarian Outreach Program (DHOP) to the Mathare slums in Nairobi, Kenya. As co-manager of the trip, Vreeburg helped put 51 dental professionals and support staff on the ground. It took 10 months to organize and is believed to be the largest such dental outreach in Kenya’s history.

This story originally appeared in the spring 2013 issue of Chapman Magazine.

The 8-year-old girl had a decayed front tooth, discolored almost to the gum line. In the African city slum where she lived, the disfigurement was essentially a curse that would repel marriage suitors and crush her prospects for a hopeful future.

Then the dentists arrived, led by Sean Vreeburg ’09 (M.S. ’10). They treated and restored the tooth. The girl smiled and her mother wept for joy.

“I haven’t ever seen somebody hysterically cry with joy after dental work like that,” Vreeburg said.

It’s just one of many profound memories Vreeburg and his classmates at the Ostrow School of Dentistry at USC brought home from their weeklong humanitarian dental trip to the Mathare slums in Nairobi, Kenya. As co-manager of the trip, Vreeburg helped put 51 dental professionals and support staff on the ground. It took 10 months to organize and is believed to be the largest such dental outreach in Kenya’s history.

“It turned out to be the biggest, most intensive thing I’ve ever done,” says Vreeburg.

The lion’s share of the details, including translators, power sources, security and insurance fell to Vreeburg and his fellow organizers. Back home, Vreeburg reflected on his ability to pull off such a project.

It had its beginnings at Chapman, he says. “The experiences I had there really helped me become successful at this level,” he says. “It was a fantastic experience.”

>> MORE: Read more about Vreeburg’s trip on Happenings. View photos from the trip in this photo gallery from the USC Dental Humanitarian Outreach Program (DHOP).

>>WATCH: Time-lapse video below shows the team performing the treatments.