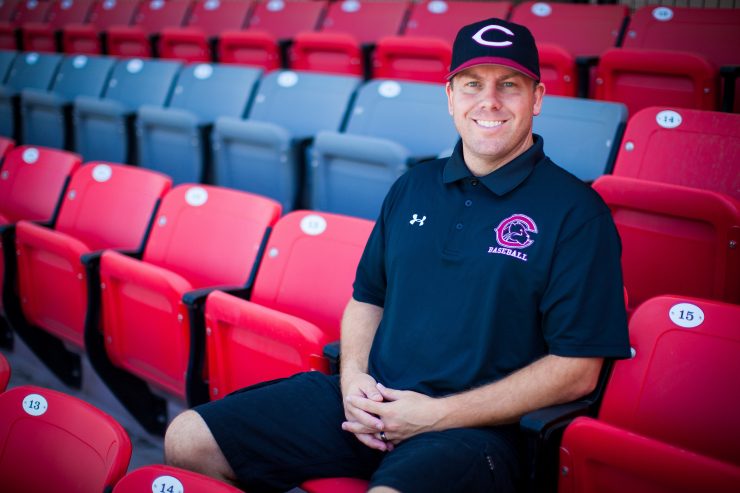 After transforming the program at Redlands, new baseball coach Scott Laverty is out to put the Panthers back on top.

After transforming the program at Redlands, new baseball coach Scott Laverty is out to put the Panthers back on top.

Turning around a losing sports program is never easy. But head baseball coach Scott Laverty did just that at the University of Redlands, where after early struggles his team became a perennial contender. Still, Laverty couldn’t seem to escape a shadow.

“We were always envious of Chapman,” he said. “I mean all of those College World Series appearances — that’s where we wanted to be.”

And now Laverty is here. This summer, he was named the new head coach at Chapman University, taking over a Panther baseball program that over the past 18 seasons has made 14 NCAA Division III playoff appearances, won 10 West Region championships and in 2003 captured the national championship.

Laverty replaces Tom Tereschuk, who resigned at the end of the 2013 season as the Panthers’ all-time winningest coach with 350 career victories. However, Laverty inherits a Chapman team coming off its first losing season (18–21) since 1995. He is joined by Dave Edwards, the Panthers’ associate head coach and pitching coach since 2003, who remains on the staff.

Laverty had to endure his share of losing campaigns early in his 14-year tenure at Redlands. He took over a fledgling program that finished under .500 eight times from 1997 to 2004. But by the time he left, the Bulldogs had enjoyed nine consecutive winning seasons and finished first or second in the Southern California Intercollegiate Athletic Conference (SCIAC) five times.

After a nationwide search, Panther officials decided the best man for the job was in their own conference and lived just a few minutes from the Chapman campus, in Placentia.

“This was the largest applicant pool of any position we have filled here at Chapman,” said Athletic Director David Currey, who headed the search. “It speaks to the respect our baseball program has earned and the young men and past coaches who have helped to build that.”

Laverty is glad to be in a position to do some building of his own.

“I’m ecstatic about the opportunity to work with this team,” he said. “We’ll be very young, but we’ll have a lot of talent.”

Laverty has a great reputation as a teacher and coach, Currey said. “He is a proven team builder, winner and understands the big picture of college athletics,” the athletic director added.

The new Panther coach also has a strong track record as a recruiter, although now he will need to find a new measuring stick.

As the coach of Redlands, “I always knew that if I was recruiting someone Chapman was, too, I was in the right place,” he said.

That was good practice. Because as he sits in his office at Chapman, Laverty is convinced that now and for the future, he’s in the right place.