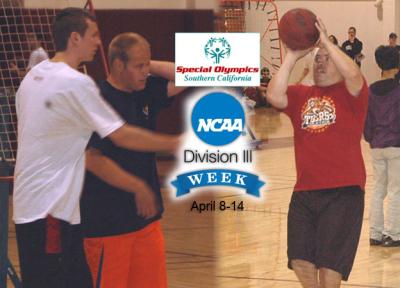 Student athletes hoop it up at Special Olympics basketball clinic

“I wanted it to be run like a normal basketball camp,” said basketball player Greg Watson ’15, the event’s organizer.  “We had them go through many fundamental drills, but the goal was to have fun.”

The camp was run like most, beginning with warm-ups and skills training and concluding with some friendly competition. Pitching in with instruction were athletes from football and the women’s soccer team.

“I really think that all of the Special Olympics athletes had a great time,” said Chapman SAAC President Elliot Cooley ’13, a defensive lineman on the football squad and president of SAAC. “(Our) athletes did a great job interacting with all the Olympians, and I really think they all enjoyed it as well.”

SAAC hopes to make the basketball clinic an annual event.