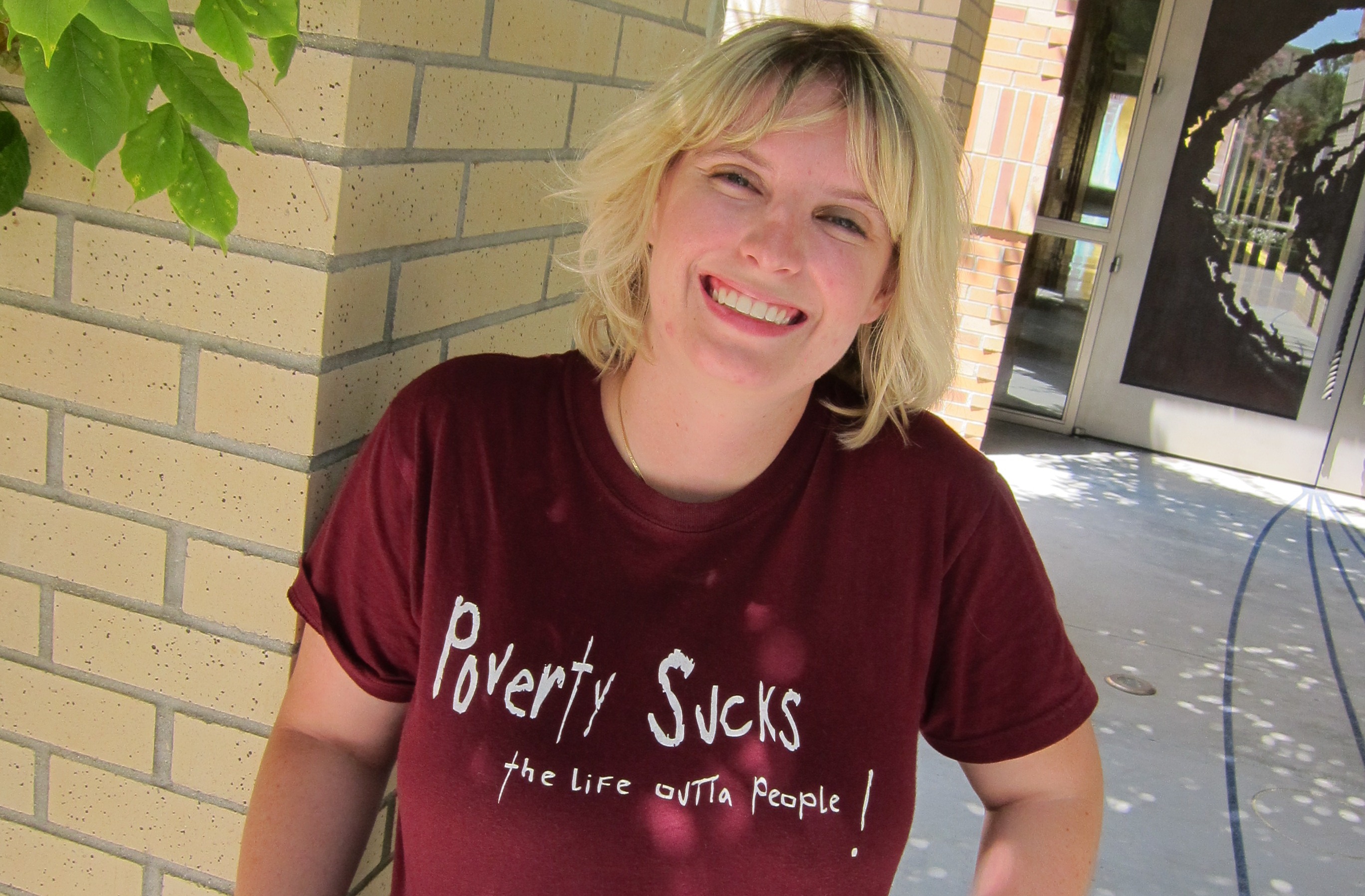 The very hungry intern: Poverty simulation wears her out for a week, but lessons endure

This summer Fulbright Scholar Cambria Findley-Grubb ’13 studied the hard numbers behind poverty in America. The really hard numbers. Like how to feed a family for a week on $21 in food stamps. How long a bus transfer is valid. How precious one apple becomes when it’s the only fresh fruit you’ll eat all week.

Findley-Grubb’s one-week experience of living at the poverty level was arranged courtesy of her summer internship with Urban Spirit, a faith-based nonprofit in Louisville, Ky.
Urban Spirit
plunges people into simulations with the goal of changing participants’ assumptions about poverty and returning them to their communities with a passion for change. Church and youth groups from throughout the nation travel to Louisville for the simulations.

Of course, it was hardly the real deal. Interns are housed in a safe, air-conditioned house. Findley-Grubb got stranded on the bus system beyond the city limits and a supervisor retrieved her.  She and her teammates failed at some tasks – they never found a reduced-price school uniform for a hypothetical third-grader despite hours of visiting downtown churches and social service agencies. But no one lost a day of work or missed school, as might have been the case in a real family. Still, the experience made an impression.

We caught up with Findley-Grubb recently to talk about her summer, just before she takes off on her next adventure as a
Fulbright Scholar
in Nova Scotia, Canada. She arrived intentionally wearing a T-shirt emblazoned with a message she says sums up the main lesson: “Poverty Sucks the life outta people!”

The following is an edited version of that conversation.


Q
.
We know poverty is hard and see it in our own communities. Why do we need a simulation?

Q
.
What grows out of that?


A
. The really cool thing is that we encourage the groups to come up with some sort of project that spreads or continues the learning they’ve started. We have youth who want to be businesspeople and maybe now they’re more committed to paying a living wage, or they’ll look for politicians they can vote for who support those ideas.

Q
.
How did your team of four feed itself on the typical food stamp allotment of $21?


A
. We were living in the west end of Louisville. It’s a food desert there in that neighborhood.  It takes a mile to walk to the nearest grocery store. We pretty much bought rice, tortillas, beans, bread, peanut butter and jelly. We didn’t get any fruits or vegetables. Each of us bought one apple for the whole week. You could eat it at once, cut it up, save it for later or whatever you wanted to do with it. It was supposed to be a treat. Then we had to walk back in the Louisville weather and get back in time for work.

Q
.
What was your main takeaway from that week in particular, as well as the entire summer?

Q
.
And how was that apple when you treated yourself to it?


A.
By the end of the week I was craving fruit and vegetables. I don’t even remember fully eating it because, despite trying to savor it, I am sure I scarfed it down.