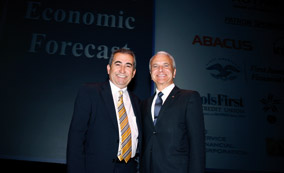 A mixed bag of economic news – construction is up in Orange County, but a drop in federal spending could hurt California – was presented by Chapman University’s A. Gary Anderson Center for Economic Research on Wednesday.

Overall, the economic recovery is expected to continue, albeit slowly, according to the findings in the Anderson Center’s 2013 mid-year forecast update. President Jim Doti and Esmael Adibi, Ph.D., director of the A. Gary Anderson Center for Economic Research, presented the report to an audience of 1,000 business and community leaders gathered in the Segerstrom Center for the Arts in Costa Mesa.

“We have room for this recovery to continue. I think it may continue easily all the way to 2016,” Doti said.

But along with the good news, the forecasters also expressed concern over the impact of federal defense spending cuts on California manufacturing and related industries. To reflect that dichotomy, Doti shared his recent experience from a walk-on role as an economist on
The Bold and the Beautiful
, made possible by film alumnus
Casey Kasprzyk ’01
. Among Doti’s lines was this ambiguous remark:  “An economic forecast is like aloha. If it doesn’t mean hello, it means goodbye.”

At the time that line made little sense, Doti joked, as he pulled up an image of
the scene
on the Segerstrom stage. But now it could be symbolic of the varied economic news.

“There’s a lot of danger in rapid growth, and that’s because of the Fed’s concern over the inflationary impact of the economy that’s moving into some kind of inflationary trajectory,” Doti said. Despite signs of the Federal Reserve Board’s nervousness over inflation, Doti said he nevertheless didn’t anticipate major changes to interest rates.

Chapman University has built a reputation for the accuracy of its Annual Economic Forecast. The center generates its annual forecast and the mid-year update using the Chapman Economic Model, created in 1978 by Doti and his students. It was the first quarterly econometric model for a metropolitan area and is still used to create the annual forecasts and updates.

To read a summary of the forecast update and other economic news, visit the
A. Gary Anderson Center website.

Long before Eric Chier ’24 became a Masimo Scholar, he had the company’s devices in his life. “I didn’t know it, but we had Masimo tools in our house,” Chier says of the global medical technology company. “Getting the...