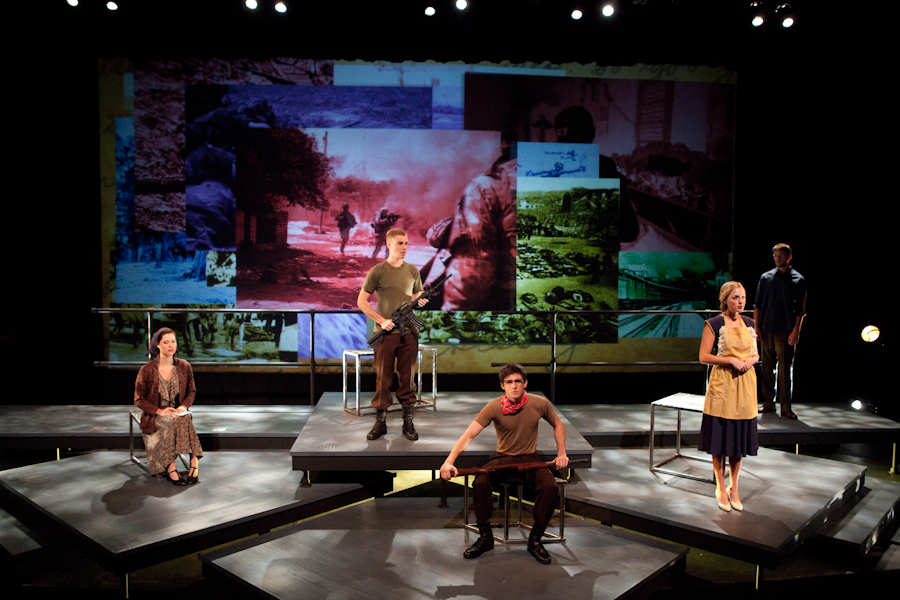 A new version of "If All the Sky Were Paper" will be staged at Waltmar Theatre beginning Wednesday, Nov. 7.
Arts & Film

After its successful world premiere at Chapman in 2010, Andrew Carroll’s If All the Sky Were Paper has been remade and returns to the Waltmar Theatre stage on Wednesday, Nov. 7.

The show is created through the letters of American soldiers, sailors and airmen and their loved ones at home. If All the Sky Were Paper was written by Carroll based on his New York Times best-selling books War Letters and Behind the Lines.

This production will kick off Carroll’s 50-state tour, sponsored by Chapman University to promote the Legacy Project and encourage people to preserve these invaluable documents that help define our collective history of the war experience.

Carroll has traveled to 40 countries, including Iraq and Afghanistan, to seek out what he calls “the world’s greatest undiscovered literature,” and has collected more than 87,000 previously unpublished letters (and now emails) from every conflict in U.S. history.

“These letters are intimate, deeply personal portraits of the courage, sacrifice and sense of duty that made this country,” said broadcaster Tom Brokaw.

Prior to his death, the late author Studs Terkel said: “These war letters are more deeply moving, more revelatory and more powerful that any dispatch from the front. It’s the truly felt history of what war is all about.”

If All the Sky Were Paper features the best of the Legacy Project’s never-before-seen letters, as well as letters published in both War Letters and Behind the Lines. Actors – most around the same age as the letter-writers were in their time – will take on the roles of the military men and women and their loved ones at home, acting out the full spectrum of emotions and experiences contained in the letters.  From the incredible drama of the human experience in battle to the pathos and humor of everyday life on the war front and the home front, the letters will move and inspire audiences.

Several special events are tied to the production.  On Thursday, Nov. 8, an interdisciplinary discussion and audience Q&A with the play’s director, John Benitz, and Carroll will take place following the performance.  A pre-show talk by Carroll about the Legacy Project will be given on Friday, Nov. 9 at 7:30 p.m., and the show will begin at 8 p.m.  The Nov. 11, 2 p.m. performance will be followed by a post-show discussion with Carroll, Benitz and invited VIP guest speakers to be announced.

Carroll’s letters have been featured on Oprah, NBC Nightly News, ABC’s Good Morning America, CBS Sunday Morning, CNN, Fox News and This American Life, as well as many national publications.  Carroll’s other books include the best-sellers Letters of a Nation and Operation Homecoming, which inspired the Oscar-nominated and Emmy-winning PBS documentary of the same name.  His latest book, Here is Where: Discovering America’s Great Forgotten History, was published by Crown in May 2013.

The show runs approximately 80 minutes with no intermission.