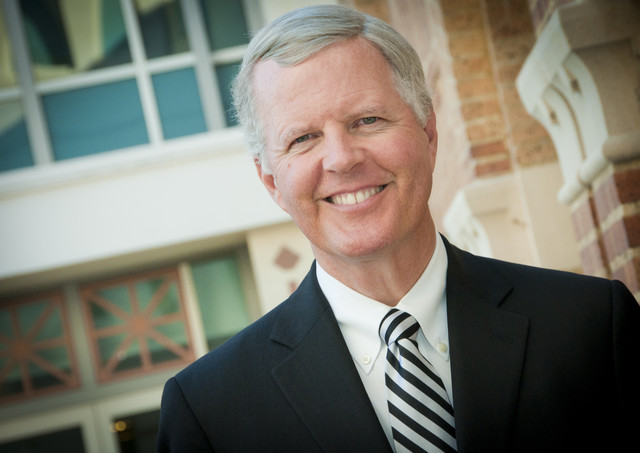 Tom Campbell, Ph.D., dean of
Chapman University’s School of Law
, will be one of the keynote speakers at “September 2012 Economic Outlook,” a Thursday, Sept. 20, event of the
UCLA Anderson Forecast
. The program topic is “Presidential Economics: Does it Matter?”

Joining Dean Campbell as a fellow keynoter will be
Phil Angelides
, former California state treasurer and chairman of the Financial Crisis Inquiry Commission. Each will speak on “What Ails the U.S. Economy: What are the Remedies?” Other speakers will be senior economists from the UCLA Anderson Forecast.

Campbell was appointed dean of the School of Law in February, 2011. He came to Chapman in January 2009 as a visiting Presidential Fellow and Fletcher Jones Distinguished Visiting Professor of Law. Prior to joining Chapman, he was the Bank of America Dean and Professor of Business from 2002 to 2008 at the Haas School of Business at the University of California, Berkeley, where, during his tenure, the business school’s Wall Street Journal national ranking improved from 15th to 2nd. Campbell was a professor of law at Stanford University from 1987-2002; associate professor at Stanford, 1983-1987; a member of the United States Congress from 1989-1993 and 1995-2001; a member of the California State Senate from 1993-1995; and the director of the California Department of Finance from 2004-2005. He has a B.A., M.A., and Ph.D. in economics from the University of Chicago, and a J.D., magna cum laude, from Harvard Law School, where he also served as a member of the board of editors of the Harvard Law Review. He was a law clerk to United States Supreme Court Justice Byron White, and to US Court of Appeals Judge George E. MacKinnon; a White House Fellow; executive assistant to the Deputy Attorney General, Department of Justice; and, director of the Bureau of Competition at the Federal Trade Commission. His principal area of academic work is in the application of economics to legal questions.